As everyone here at MTF knows, I’ve been a fan of Channing Tatum’s forever! Before The Vow, before Step Up even…Yep, I go back pretty far with Mr. Tatum! And now he’s been named the sexiest man alive according to people magazine. I’m sure that’s a nice cherry to a pretty magic year… Get it Magic Mike…

Anyway, bad puns aside, the sauc-a-licious Ms. Pinky wanted to share how nice Channing Tatum is to his fans and do a little recap of meeting the sexy star… Forgive me the Sexiest star! LOL…

Hello, my lovelies. Pinky Lovejoy here thrilled with the news that one of the nicest (not to mention hottest) guys in Hollywood, Channing Tatum, was just named People Magazine’s newest Sexiest Man Alive ( a crown that had most recently been worn by my true love, Bradley Cooper). Now, there’s nothing sexier than a star who not only appreciates but is kind to their fans and in terms of being fan-friendly, Channing is amazing. For the longest time after I moved here I hadn’t met him and people would always say, “How do you NOT have Channing? He’s the nicest!” They weren’t kidding. On several occasions I’ve seen Channing take his time with a line of up to 100 people, signing autographs, taking pictures, and treating each person like they were the most important person there. He isn’t just sweet, he seems genuinely sincere, which is a rare quality (especially in Hollywood). He makes me feel like he actually cares that I’m a fan. His wife, Jenna, is the same way – I adore them as a couple. 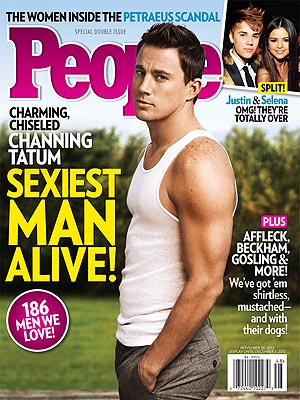 Perhaps it has to do with his humble beginnings. After being born and raised in Alabama, Channing spent most of his teenage years in Tampa, Florida and was, not surprisingly, very athletic (he was even named “Most Athletic” in high school and attended college on a football scholarship). After dropping out of school and working odd jobs, he ended up stripping under the name “Chan Crawford.” Oh, what I wouldn’t have given to see his act (wait – did I just say that out loud?). Years later he was discovered by a model talent scout in Miami, Florida and one of his first gigs was as a dancer in the Ricky Martin video “She Bangs” (fitting, no?).

As a fan, I can certainly tell that he’s been able to retain a level of humility that many stars, unfortunately, don’t seem to possess. 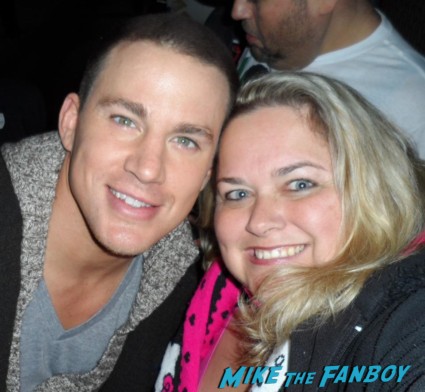 I tweeted him our pictures after meeting him and he retweeted it to all his fans! I was suddenly being tweeted by people all over the world wanting to know more about Channing and I was more than happy to report that he’s as good as it gets – he’s the real deal. I so appreciate Channing and his ability to stay grounded. This honor couldn’t have been awarded to a better person.

Congratulations, Channing! And thank you from the bottom of my pink-loving fangirl heart. 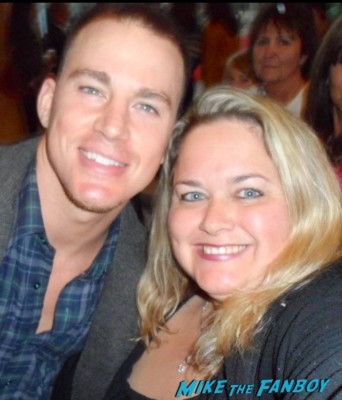