Pinky had the good fortune and fun to attend the Wayne’s World reunion. I would have been there if not for my Vacation. It’s okay, it’s all good. LOL…

Now, most of the original cast was there including Dana Carvey, Mike Myers, Rob Lowe and more! I’ve been wanting to meet Mike Myers for a long time and he has still eluded me. But Pinky’s report gives me hope!

Hello, my lovelies. Pinky Lovejoy here still on a high from having the privilege of attending the Wayne’s World reunion in honor of the film’s 21st birthday (!!!). 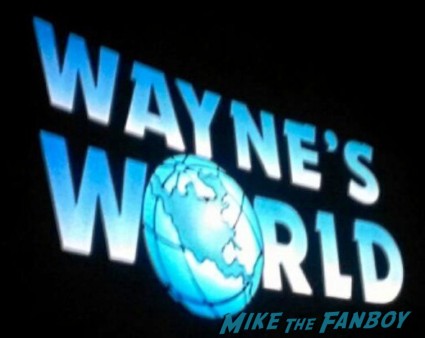 Wait – what? How can that be? I’m pretty sure it came out when I was in college. Oh…right…nevermind. Big thanks to Mikey for sending me the information on purchasing the $5 tickets (which were a steal as I would’ve paid up to $100 for the event) from the Academy of Motion Picture Arts and Sciences.

According to the moderator, Hawk Koch, the tickets sold out within 90 seconds (Party time! Excellent!). Back in the day I was a HUGE Wayne’s World fan, so having the cast come together for a screening was a dream come true. 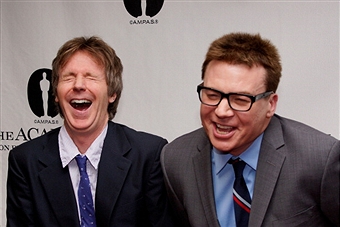 I bought my tickets as soon as I could and then invited Billy and Scotty to come along with us (big shout out to the cute boys for saving our seats). I’m so glad I went! Originally it said the event would have Dana Carvey, Mike Myers, Lorne Michaels, and director Penelope Spheeris on the panel, but when we got there we saw Rob Lowe was there, as well (Sch-wing!). 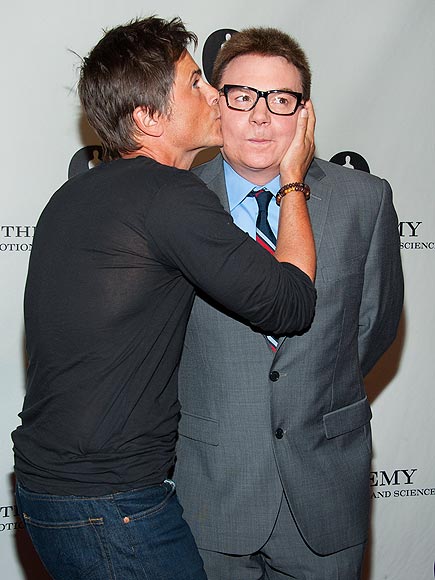 Then, to our surprise and delight, the audience was filled with crew members, additional cast members (Lara Flynn Boyle and Tia Carerre), and as a bonus they handed out cool programs/mini posters to the audience (No way! WAY). 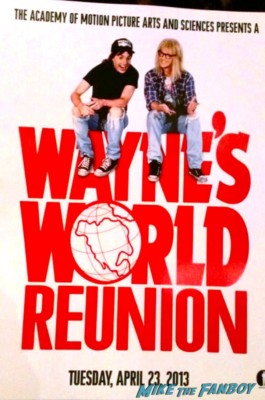 Now, over the years I’ve been lucky to meet practically the entire cast, but the one person who eluded me was Mike Myers. I’d never seen him in person and was dying to get a picture with him. To up my chances, I made a little pink sign, and hoped for the best. 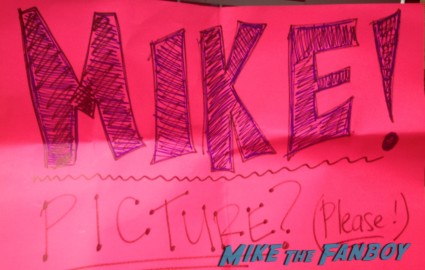 Sadly, it wasn’t looking good as security was extra tight and apparently even took one fangirl aside and warned her not to rush the stage after. Um, what? As I’d never been to that particular theater before, I wasn’t sure what to expect, so I still continued to hope for the best.

Instead of the usual Q&A after the film, this event led with the panel before the film. Aside from the moderator, the panel was outstanding – I loved hearing how the film came together and how Mike Myers had never even been to a film set before they started filming. I would’ve loved to hear everyone’s favorite parts of the film, but instead of asking Mike and Dana what they liked, the horrible moderator decided to bore us with stories about his kids (which we were all super interested in…Pshaw! Yeah, right! And monkeys might fly out of my butt!). Rob Lowe is impossibly good looking and met the guys while hosting SNL. It wasn’t until after the panel that I read an article about a big falling out between Penelope Spheeris, Dana Carvey, and Mike Myers immediately after the film was released (how did I not know about this before? Oh, yeah, right. I was in college and not paying attention). This was the first time they’d been together since but you never would have known it from how easily they all interacted onstage.

After the panel everyone cleared the stage and security came and formed a solid line across the front of the stage so that all of us “pesky annoying fans” could not even attempt to ask for a picture or autograph. Not to be thwarted, I went up a railing they’d forgotten to block that was near the edge of the stage where they exited and held up my sign for Mike. He was so kind and gracious – he was totally cool about signing and posing for fans (which leads me to question the necessity of such tight security measures…..). 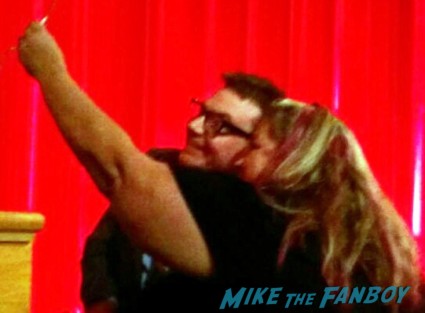 I was SO happy to get my picture with Mike (even if it is a bit blurry). 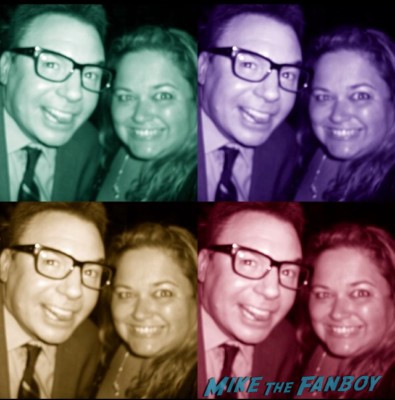 We stayed for the screening and I have to admit that the film held up over time – I laughed throughout the entire thing. Wayne’s World is a fun comedy and Mike Myers and Dana Carvey, as always, are amazing. I’m not worthy! I’m not worthy!

Check out Pinky’s Cast photos below! 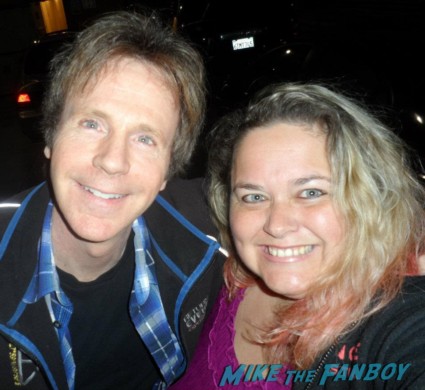 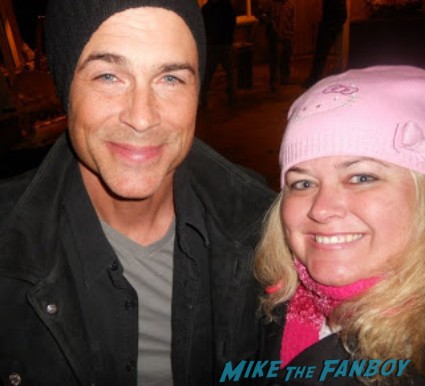 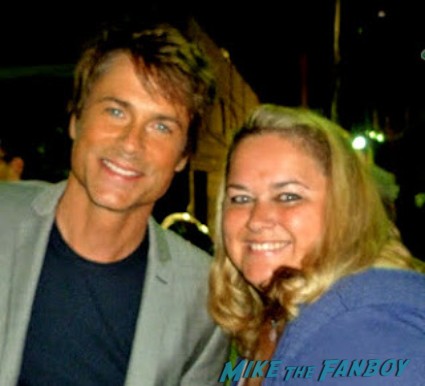 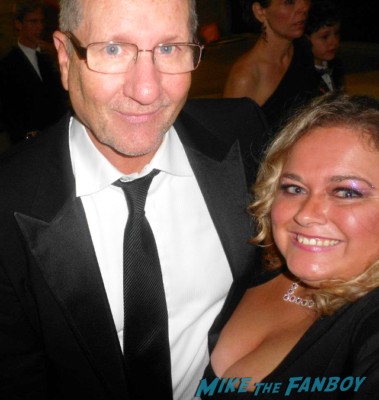 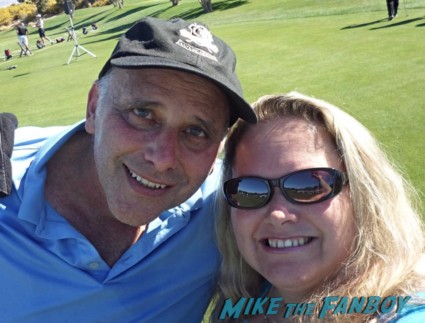 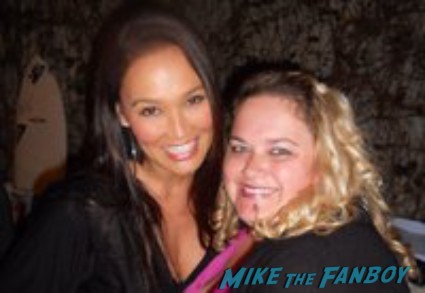 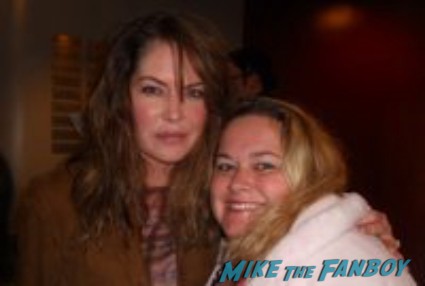