Home / Fanboying! • Q and A / Prisoners Q And A! Meeting Jake Gyllenhaal! With Melissa Leo! Maria Bello! Autographs! And More!

Awards season is in full swing here in Los Angeles… Well, maybe not full swing but at least it’s starting. Scotty and I headed out to a screening and q and a for Prisoners, the latest Jake Gyllenhaal and Hugh Jackman film.

The screening is going to be followed by a q and a with Jake Gyllenhaal, Melissa Leo, and Maria Bello.

The film itself is a heavy film. Hugh Jackman plays a father whose daughter gets kidnapped. He kidnaps and tortures the boy he thinks did it. Jake Gyllenhaal is the lead detective trying to find his daughter.

It’s films like this, that I love to see and never see again. LOL… It was a really well done, movie and both stars Hugh Jackman and Jake Gyllenhaal did an amazing job. However, it’s not exactly the feel good romp of the year.

After the film, the three stars were introduced. Everyone seemed to be having a good time seeing each other again. Melissa Leo in particular was very chatty.

Some highlights of the Q and A- 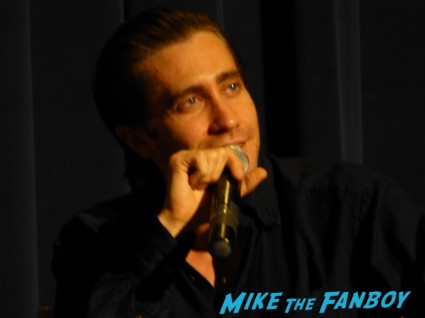 Jake Gyllenhaal talking about the different ticks that he incorporated into his character. 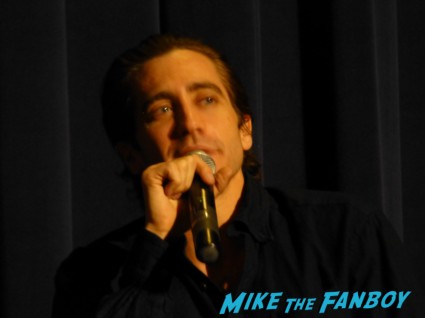 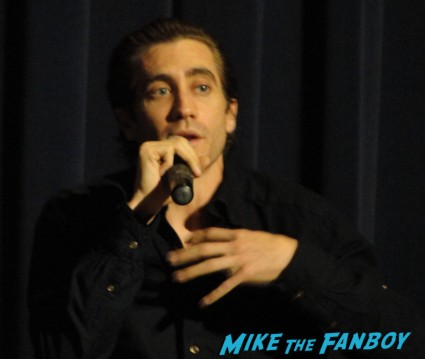 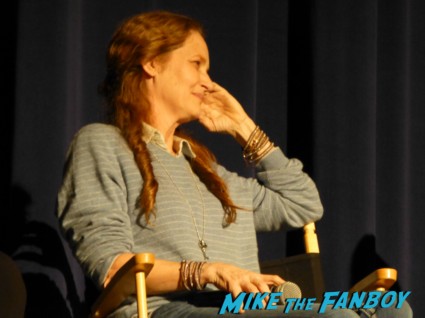 Melissa Leo turned down the role multiple times fearing that she wouldn’t be right for the role.

Melissa Leo also said that she had to fight for the wig she wore in the movie. The director insisted that there be no wigs but she felt she needed one for the character. 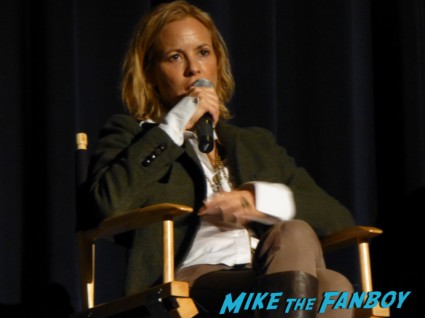 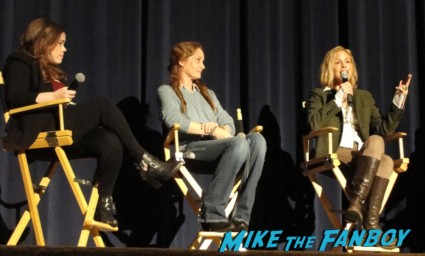 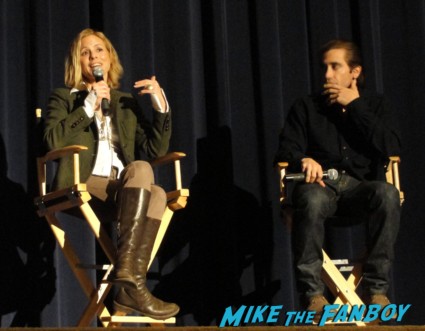 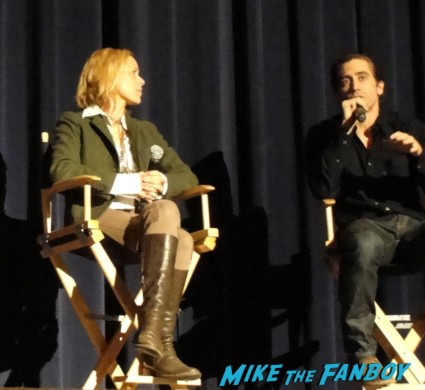 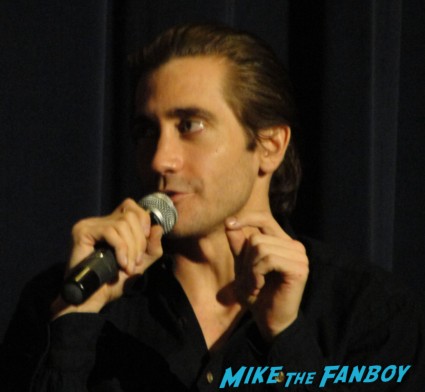 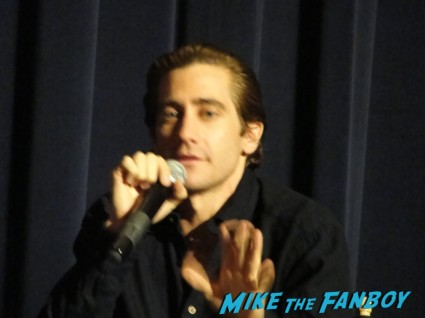 Jake Gyllenhaal was the first to be cast in the movie and he worked with the director on his previous film.

Maria Bello talked about how Hugh Jackman was awesome in the film and that the director allowed her to reshoot an entire scene after seeing improv that Hugh and Jake Gyllenhaal did. 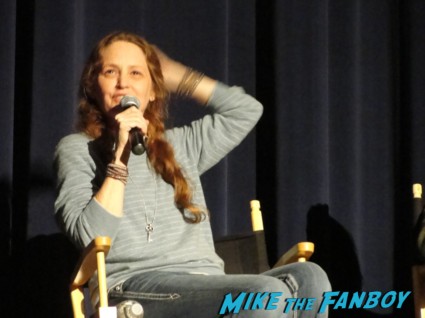 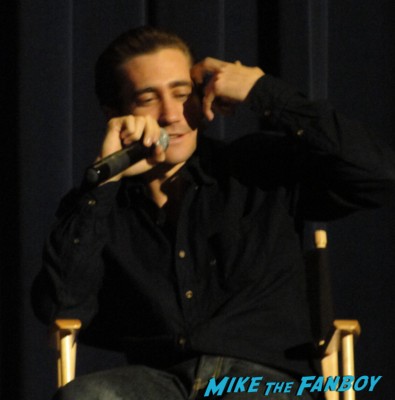 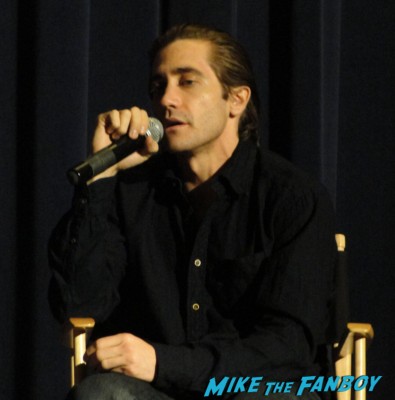 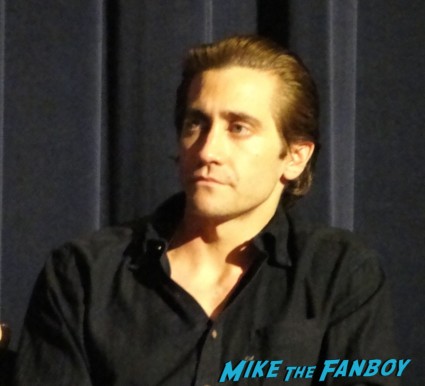 Jake Gyllenhaal mentioned that Hugh was super giving and he worked with the cast so much to make each scene better.

In terms of the film, Jake Gyllenhaal said he was drawn to the project because of the discussion of violence and the consequences of it.

After the screening, Scotty and I didn’t move fast enough to get to the stage. Doh. Of course I had some magazines for Jake Gyllenhaal to sign.

We headed outside where Ace was pacing back and forth in his overheated hoodie. We saw Jake Gyllenhaal and asked him if he wouldn’t mind signing for the few of us.

Jake Gyllenhaal got in the car and then as the car was leaving rolled down. He said, “I’m only signing the Donnie Darko stuff.” I was like… Ummm really? I had some magazines and Scotty had his October Sky DVD cover. Jake ended up signing one thing each and was pretty cool. I asked him to sign my OUT magazine he did it even though, he was only going to sign Donnie Darko.

It was a fun afternoon, and I’m glad that Jake Gyllenhaal was cool.

I would totally recommend seeing Prisoners, but prepare for an emotional journey! 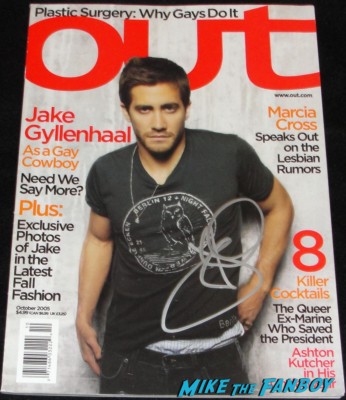