Home / Billy Beer's Barstool • Fanboying! / Billy Gets Rousey… Ronda Rousey That Is! The UFC Star Is Super Awesome To Their Waiting Fans! With Liev Schreiber! Autographs!

I know how much Billy loves Ronda Rousey. He talks about her incessantly, Day in, day out. “Ronda Rousey is so nice! I don’t know how she does it.”

Ronda Rousey was on a talk show yesterday and once again she was super awesome to the tons of fans waiting. Of course Billy hauled himself all the way to Los Angeles from Oceanside to meet her.

Welcome back to Billy Beer’s Barstool. Well since Mike actually posted my article in record time. I figured I would show my appreciation for that, and send him another one. Which is surprising, cause usually all Mike motivates me to do is eat Twix and watch Star Trek Spinoffs.

Today we are off to see The Rodey One, The Slaughter House in a Blouse, The Undefeated Women UFC Champion and most importantly the #10 signer on Mike the Fanboy’s Top 10 signers list, Ms. Ronda Rousey!!!!!

Like I’ve mentioned before, I am one of the biggest Rousey fans even before she was in the UFC. She is pound for pound one of the greatest fighters man or woman the UFC has ever seen. Even when she’s deep into training, she still has the time to take care of her fans.

I had to drive from Oceanside from work again today. Last time I tried this, I missed Zoe Saldana by 2 minutes. Luckily traffic wasn’t as bad and it ONLY took me 2 hours and 45 minutes to get to where I was headed.

A few people knew I was going and were nice enough to save me a couple of spots, cause they knew I was a big fan. I was informed that she said she would do it on the way out, so that made me feel better knowing I hadn’t wasted a long drive. 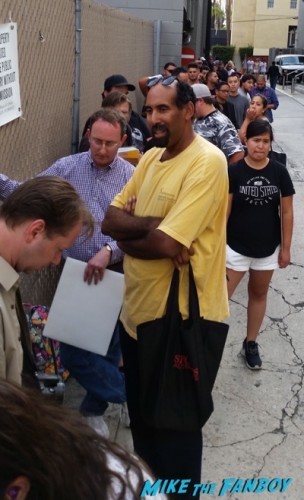 Now I’ve been here a number of times, and I can honestly say that I have only seen a line this long twice. Once for Robert Pattinson and the other for Tom Cruise. It was crazy. I guess she was somewhere the day before and they snuck her out, so everyone that went there brought their stuff here.

Ronda was actually the second guest today. After a little bit of waiting, the first guest Liev Schreiber comes out. I didn’t expect him to come over, but believe it or not, even with the crazy line, he came and signed and took pictures with everyone, 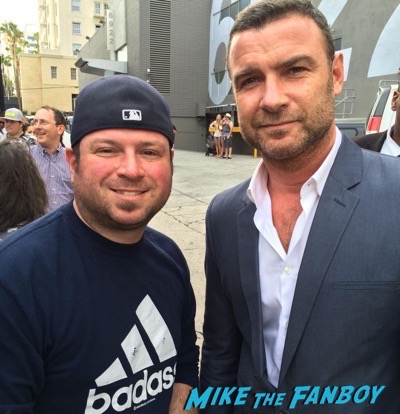 Finally it was time for Ronda to come over. She exits, and makes her way in our direction. There was an announcement that we had to personally personalize our own pictures or else she wouldn’t sign it. Now that’s the first time I’ve ever heard of that, but I do know she ALWAYS personalizes, and this would save herself a whole lot of time, cause by the way she was talking, she was going back to train some more. This girl is in fight mode! 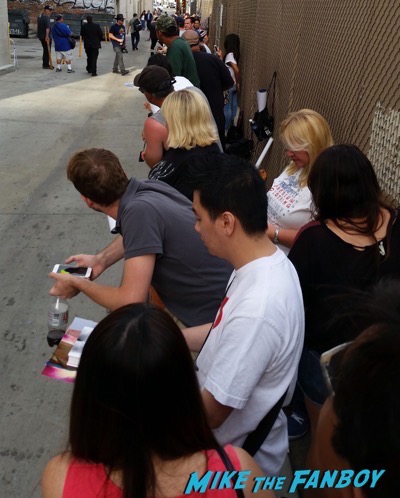 Also, we were told 1 each, and no photo-ops. This upset a few people. But as she was going down the line, she would still sneak a second picture for the “double dippers” and pose quickly for the photo-op people. 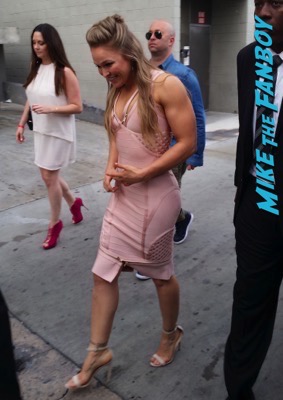 When she got to me, I was hoping to get 2, one for myself, and the other for one of my soccer players I used to coach who is now a fighter. I decided not to push it though, cause she signed my 20×30 beautifully and added an inscription for me (first 20×30 making Andy proud). And that was it. She continued down the line till she was finally finished. 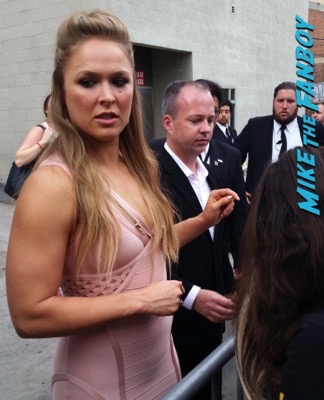 I’m sorry, but after going through that line, and signing as much as she did at the Entourage Premiere, Mike is going to have a hard time convincing me she not moving up on her list. 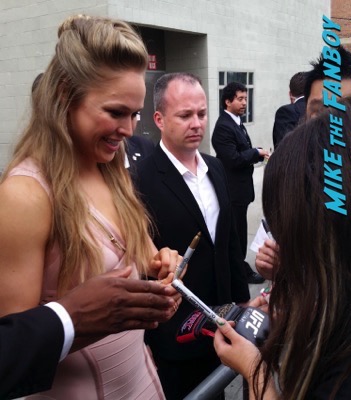 This is the Michael Jordan, the Tiger Woods, the Derek Jeter of her sport, and she signed more graphs for fans in one day, then they probably do all year.

Well, no time for Happy Hour today, I have to get my pictures ready for Comic Con. Till next time. 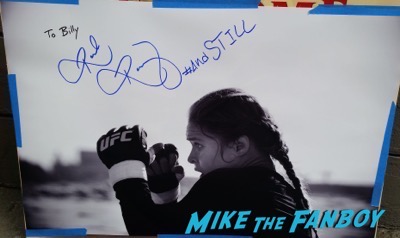