Can I tell you how much I love Sarah Jessica Parker? Love her! Sex and the City is one of my favorite shows, Carrie Bradshaw. Two words, that’s all you have to say! To put it this way, I saw New Years Eve in the theaters.

Scotty and Anushika are also huge fans, I have standee’s, magazines, etc… So when we saw that Sarah Jessica Parker was doing a signing, we were going to go. I found out it was for women’s shoes and handbags and as much I would have use for women’s shoes, I decided to try and wait after

But Anushika went to the event… And it was… Interesting.

This is just a quick write up just to give you guys yet another reason to LOVE Sarah Jessica Parker. I absolutely adore her! =D I’m sure you guy know that she just launched her new SJP shoe line last Friday and she is currently touring a few cities promoting her line. Scotty and I were pretty much freaking out when we heard that she’ll be doing one of her singing right here in LA. You guys will get a full recap from Scotty, but I’m just sharing a side story that happened this morning. I haven’t slept since 3am Thursday morning, so please bear with me.

I managed to get there early enough to be the first in line and was totally stoked since I’ve never been first in line. Since I don’t drive, getting there was quite scary. Yay I survived! =D If you guys have been to any events like these, you know how things could change in matter of minutes regardless of all the planning. Even though the staff at the venue seemed confused about where to line us up at first, they were super nice enough to keep us posted and kept checking in on us. 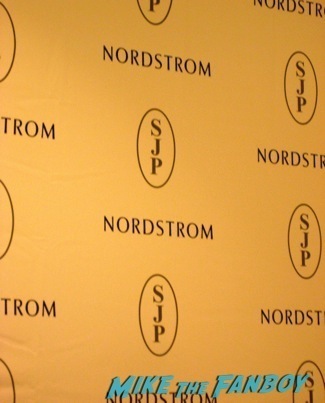 Once we all got inside, they were giving us instructions as they figured things out. I love rules. I’m a follower. The only time I get frustrated is when staff members aren’t consistent with their set rules. I was the first in line and they asked me to pick the shoe, the box or the tag to get singed. They didn’t even wanted me to have the shoes inside if I wanted the box signed, and we pretty much had to leave everything behind with their assistants. I completely understand. Time is precious and they are trying their best to get as many people into the event as possible. Which I think is great! =) I was pretty bummed that I couldn’t get the tag and my shoes signed, since I’ve been seeing all these other girls getting all of their stuff signed at other events. I had to make a decision, so I ended up picking the tag since I could keep it safe unlike the shoes. Since I really want to wear the shoes, I thought I might ruin the autograph. I was still happy that I get to see Sarah and get her to sign something. 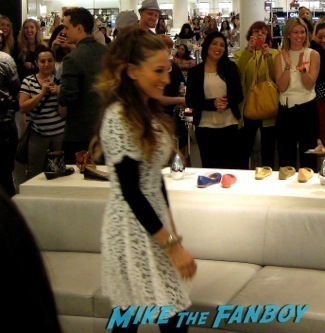 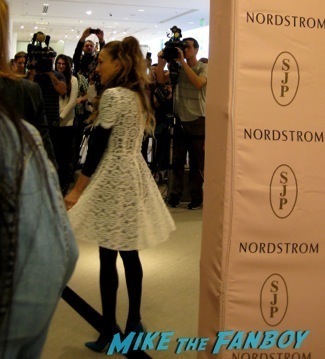 Meeting and talking to Sarah Jessica was such a treat. She is such a doll and beyond awesome!!!! =D I stuck around to take pics of her and started to realize that people were bringing their boxes with their shoes in it and the tag. 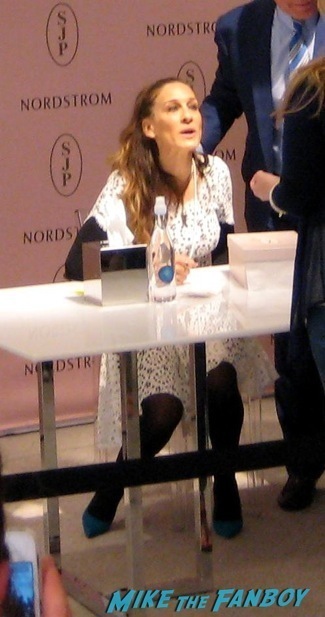 Sarah was such a sweetheart and was pretty much singing everything. That just broke my heart. I really didn’t understand what was going on. The staff told us that we can’t pose for pictures with Sarah, but one of their assistants will take all our cameras and phones to take the pictures for us during the meet and greet. I was totally psyched about that and we couldn’t thank them enough. 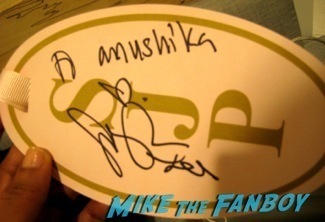 However, to make things even worse, once I got to the other side after the meet and greet, the staff members had no idea about the cameras. It took them awhile to find our cameras and when I finally did get mine back, they took someone else’s picture using my camera. I completely understand how mistakes like this could happen, but I was the first in line. I have no idea how they missed me. 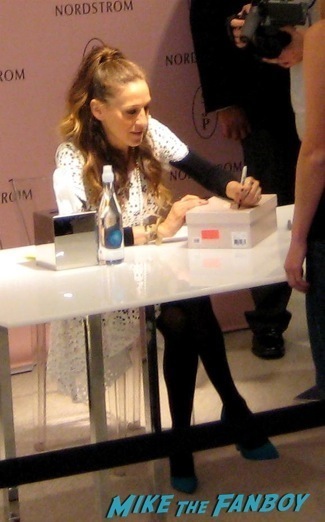 One of the staff members were nice enough to go and ask if there’s any way I could get a pic, but I already knew his answer before he even approached me. This just made me sad. I was at a loss for words. Thank god I didn’t cry lol… I just walked out to get some air. 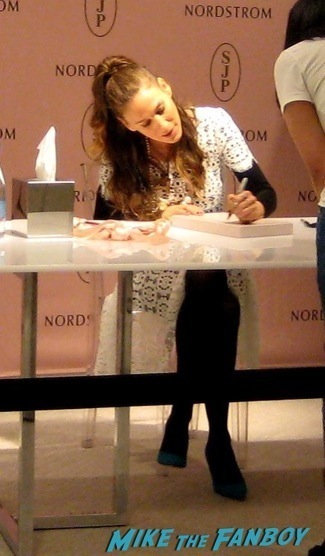 I had to run off to work. Yup, I work at night. I decided to stick around for a little bit more. I went back in when the crowd died down and snapped a pic with Sarah in the background. I know I shouldn’t be disappointed since they didn’t guarantee anything, but you just can’t help the way you feel. You have to go through the emotions to get pass it. 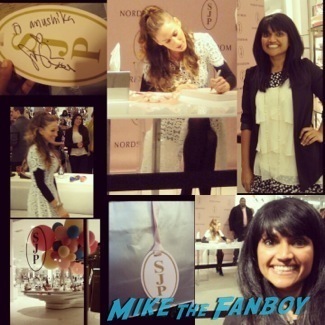 Anyway, I head to work and right before work I post a collage of the event thanking everyone. I was so grateful for the opportunity to meet the amazingly beautiful Sarah Jessica Parker. She was such a delight. I have to admit, I did search through pretty much every uploaded picture online to see if any of the fans captured my moment with Sarah, but failed miserably. I was about to clock in when I received a tweet from Mike and I reply to him right before I went into work. During my first break, I received a tweet that sent me spiraling into a shock and froze my whole body. None other than Sarah Jessica Parker tweeted me asking what happened? I just couldn’t believe my eyes. I really thought that I was so desperate that I was merely seeing things. I explained everything to her and just thank her for being so awesome. 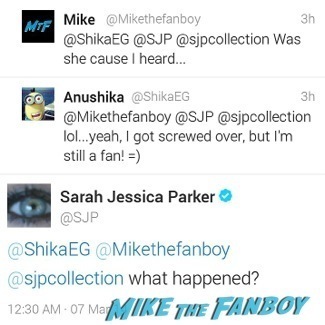 I honestly didn’t expect to receive a reply from her, but was completely touched. That made the night a whole lot better. After 8 long hours I finally got off work and was heading home. Half way through my bus ride, I receive yet another tweet from Sarah. This time I really thought I was going to cry! Lol…OMG!!!!!! I had to pinch myself. You have no idea how much this meant to me. I mean, I can’t believe she reached out to me. It’s not even her fault. These things happen, and sometimes you are the unfortunate soul. Totally sucks, but you know you move on and just hope for the best next time! =)

I just wanted to share this because it’s really rare when a celebrity sincerely cares and goes out of their way to respond. I just can’t thank her enough. I guess I’ll have to try my luck next time around! ^_^ 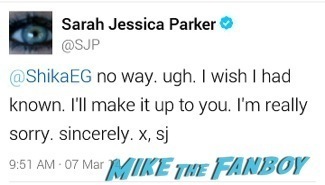