I was just thinking of this movie today and how much I love both Emma Thompson and Colin Farrell!

What a perfect Throwback Thurs! It was a fun simple night and Emma Thompson is such a sweetheart!

Seriously, Awards Season is my favorite time of the year. It’s when the starts mingle with us commoners, everyone is (usually) on their best behavior and there are q and a’s everywhere!

Tonight I found out at the last minute that there was going to be a q and a for Saving Mr. Banks. It said Emma Thompson was going to be there and I’m dying for her to sign my Love Actually mini poster. 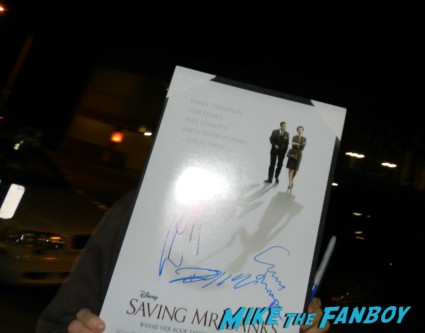 It said other cast TBA so who knows who might show up? Ohhhhh the mystery!

Billy Beer was tired after work but mustered up the gumption to meet me at my place and we headed on over. Scotty was already pacing at the scene and clutching his Saving Mr. Banks mini poster with all his might.

There are only six of us waiting and it’s a really nice group thank God. When everyone is cool and works together it can be such a nice evening!

Security came by and I think he tried to be intimidating but then when he realized we were all chill he seemed relived. LOL…

Thankfully, I brought a couple vintage magazines, A GQ and Details magazine. Billy Beer didn’t have anything so he got one of my magazines signed. Colin is such a nice guy. He doesn’t even hesitate and comes right on over to sign. He’s honestly a cool guy.

I mean really, he’s super nice. He sees my Details magazine and was like, “Damn, that’s an old one.”

And bam he was off.

Security came up to us and thanked us all for being cool.

A few more minutes and Emma Thompson should be here… Suddenly a homeless woman is walking by at the speed of molasses dripping in slow motion during a heavy frost. And you know… This is the moment that Emma Thompson is going to pull up.

Sure enough… There’s the car. Doh. And the homeless woman is stopping to pick up a penny. Sigh… We quickly make a line so she’s behind us and there comes Emma Thompson. Adorable! So sweet!

She comes over and is super sweet.

Signing taking photos, and literally everything you would want from such a classy thespian. I love her!

And then that’s about it. An easy fun night!