One of my favorite things about Cult Classic Corner is that I get to hear about films I never have before. Jack has a flair for finding small indie films that I would never have found. Now, I really enjoy Mike Mills he directed the Ewan McGregor film Beginners as well as Thumbsucker. What I didn’t know was that Mike Mills wife, Miranda July was also a filmmaker.

Miranda directed a film called The Future which Jack saw at a screening and q and a. The subject matter is unique to say the least but it’s something I just added to my Netflix queue.

Check out Jack’s encounter with Miranda July and Mike Mills after the jump!

Every so often a filmmaker bursts onto the scene and leaves an immense impact with their movies. One such filmmaker is Miranda July, whose performance art and writing superseded her reputation when she captivated audiences with her debut film “Me and You and Everyone We Know” in 2005. Upon its release, the film instantly became one of my favorite films of the year as the film racked up awards at the Cannes Film Festival and the Sundance Film Festival, among others. Needless to say, the anticipation for this triple threat’s (actor/writer/director) sophomore film was extremely high. 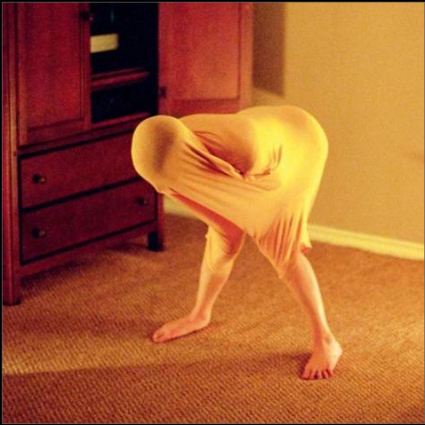 Six years passed before an audience witnessed her second feature, “The Future,” which also debuted at the Sundance Film Festival and garnered nominations from the prestigious Berlin and Stockholm Film Festivals. Unlike her previous film, July’s movie polarized audiences with its abstract, off-kilter storyline using unconventional narration with an injured cat. However, for fans familiar with her work, “The Future” is a fresh, fun film showcasing the mundane existence of everyday life for thirtysomethings. 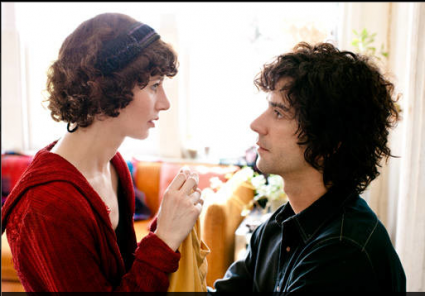 “The Future” focuses on the relationship between Sophie (Miranda July) and Jason (Hamish Linklater), a thirtysomething couple whose relationship is slowly deteriorating and seems to be a matter of convenience. One day, they decide to adopt an injured cat named Paw Paw (voiced by Miranda July) to shake things up and have to wait one month for Paw Paw’s injuries to heal. For the next month, they try to make the best use of their fleeting freedom and decide whether life-altering events (quitting jobs, embrace the suburbia mindset, ignoring their dreams, etc.) are the right decisions. 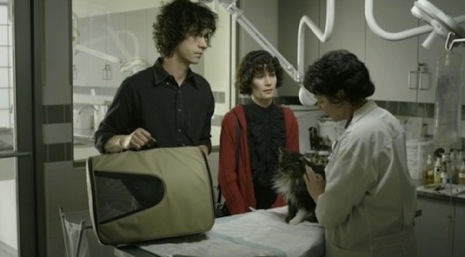 This charming comedy captivates you from beginning to end with a smart, whimsical story that begs the audiences to evaluate their lives. Each enchanting moment, particular the relationships formed by Sophie and Jason with Marshall and Joe respectively, demonstrate life is a wild adventure and we shouldn’t be afraid to explore it. To be honest, this isn’t your cookie cutter comedy and requires the audience to think. Smart, sophisticated and simply delightful, “The Future,” is one of those remarkable films that challenges viewers and rewards them with an endearing, existential film experience. 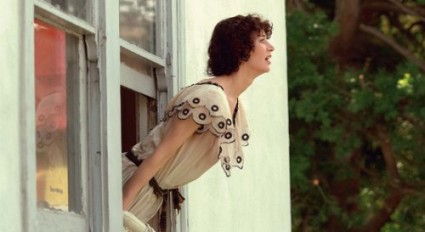 During its theatrical release I was able to check out a screening with Miranda July during its second weekend and the film instantly blew me away. Although it was not what I expected, “The Future” persisted as one of my favorite films of the year, along with her husband’s film “The Beginners” (Miranda July is married to Mike Mills, who also directed “Thumbsucker”). During the Q&A, Miranda July was quite articulate and graciously answered all questions.

Afterwards, attendees were provided with buttons that said “I Saw The Future” (which I since lost) and 4 x 6” postcards in the lobby. Miranda July even stopped to pose with fans and signed autographs in the lobby (she borrowed my black sharpie). She signed my “Me and You and Everyone You Know” DVD and “The Future” postcard personalizing both. But what made it super cool was her husband, Mike Mills was taping her fan interactions when I introduced myself to him again (I met him before while he was promoting “Thumbsucker”). Mills stopped filming and gladly shook my hand when I told him “The Beginners” was my favorite film of the year and I dug “Thumbsucker.” Needless to say, I never thought in a million years I would ever meet July or a “celeb couple” at an event, in which both were super cool.

Until the next time, happy autograph hunting. 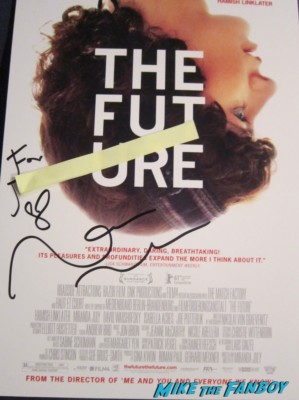