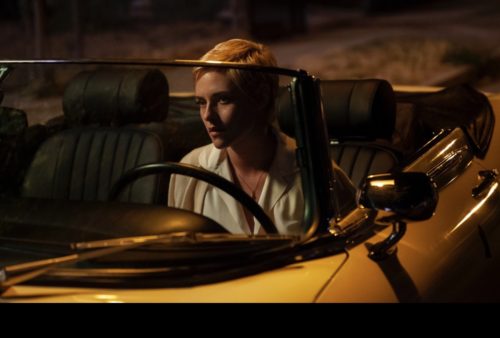 Pigeonholing an actor because of a highly successful film series shouldn’t define them. Once again, Kristen Stewart stunningly dominates as the titular actress “Seberg.”

After winning a talent contest, Jean Seberg (Stewart) made her film debut in Otto Preminger’s “Saint Joan” before becoming an icon in the French New Wave thanks to Jean Luc Goddard’s “Breathless.” Already an international superstar and at the height of her fame, Seberg flies to America with Walt Breckman (Stephen Root) discussing an upcoming project when political activist Hakim Jamal (Anthony Mackie) bursts into her life. Intrigued by Jamal, Seberg seamlessly shifts her interests from acting to activism, especially Civil Rights with the Black Panther Party. 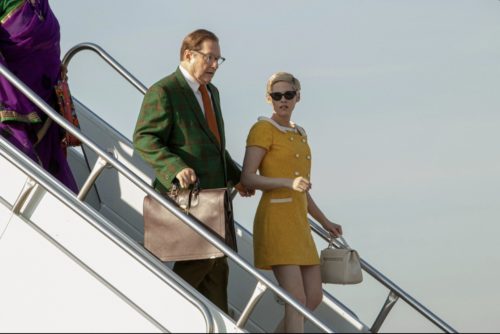 Already a controversial figure and person of interest, the FBI has been monitoring Jamal with special agents Jack Solomon (Jack O’Connell) and Carl Kowalski (Vince Vaughn) for quite some time. However, their interest increases once Seberg becomes romantically and politically involved with Jamal. Soon Seberg receives intense intimidation and surveillance, which begins to take its toll and leads her down a dangerous path.

Most moviegoers have blindly ignored Stewart’s stellar transformation from child performer to full-fledged actress whose constantly challenging herself role after role. Over the past several years, Stewart has exceptionally entertained international audiences in an assortment of arthouse movies with wonderful performance involving some of the best auteurs like Ang Lee, Olivier Assayas, Woody Allen, and Kelly Reichardt. Without a doubt, Stewart’s spellbinding performance propels what would otherwise be a forgettable film into something special. Kristen Stewart should be the actress everyone is talking about and a force to be reckoned with thanks to her transformative titular characterization of “Seberg.” Sadly, the supporting cast can’t quite capture the same magnetism and allows a fantastic, formidable achievement to be wasted.

Jack O’Connell eerily reminds me of Jonathan Groff on “Mindhunter” with the tonal similarities of a compelling character yet seems out of place overall. Vince Vaughn fantastically compliments as the senior agent, much like Holt McCallany on “Mindhunter” and steals scenes solidifying his next chapter of his career. Unlike most of his fellow Frat Pack members, Vaughn is starting to hit his stride as a character actor and becoming a more well-rounded, stellar supporting performer. Truthfully I would be content watching a project with the two of them as federal agents, in another noir thriller, or buddy film. However, the silly subplot and moral ambiguity of the Hoover-era FBI fizzles quicker than you can say J. Edgar in drag and gives the film a sharp turn. “Seberg” can’t quite recover and takes the film in a different direction. 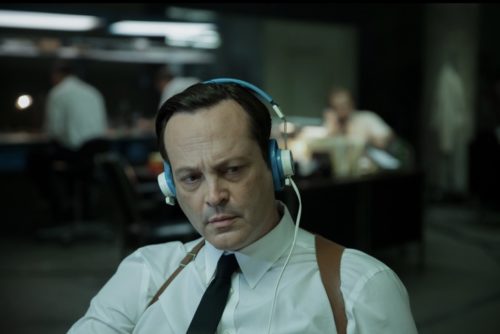 The biggest downside of “Seberg” is Anthony Mackie. I can’t quite put my finger on it, but every time he pops in a movie I instantly can’t connect with him. Honestly, how does Anthony Mackie keep getting work? He consistently conveys inauthenticity in every role and can’t quite transform completely, coming across as annoying. Mackie comes across arrogant and unconvincing with this role too. As a viewer you can’t develop compassion, concern or any appreciation for his character, which was frustrating, especially because almost all of his scenes were with Stewart or rising star Zazie Beetz. Both of their performances go to waste, which is truly a travesty, especially considering how captivating Stewart and Beetz were together and individually.

Stephen Root, Margaret Qualley and Colm Meaney are awesome additions, but they’re unable to shine due to the lackluster material. None of these stellar scene-stealers are allowed to blossom and almost fade away immediately with one-dimensional characters. The production design and color palette perfectly capture the era, but without a solid story who cares? It seems more effort was dedicated to create an authentic look instead of crafting a good script. As a result, the film flounders unnecessarily despite a cool concept.

Director Benedict Andrews can’t capture how tragic Seberg’s story was and clearly seemed fixated on not developing more meaningful material. Instead Stewart’s performance goes to waste in an insincere indulgent set-dressing piece. Although Kristen Stewart solidifies her reputation with creating compelling, committed performances, she must make better choices so more can fully appreciate and embrace her amazing acting abilities. Overall, the flawed film does a disservice to Jean Seberg and Kristen Stewart equally. “Seberg” is worth watching…at home so don’t rush out unless you’re a Kristen Stewart fan.