Home / Fanboying! • Sexy... damn sexy / Somebody Told Me That The Killers Brandon Flowers Was Awesome For Signing Autographs For Fans After Promoting Battle Born!

Scotty and I are both huge Killers fans. I mean, I remember seeing the band before they were this big back at the Troubadour here in Los Angeles. The Troubadour is tiny in case you haven’t guessed. Anyway, The Killers released their new album Battle Born last month and are hot on the promotional trail. They did an outdoor concert here in Los Angles and I went to try and get some of my stuff signed, lol… And I have stacks of stuff for The Killers! lol…

7:00 p.m. – I just arrived, I know this is later than I usually would get here but I figured everyone would be at the outdoor concert. Sadly, I couldn’t get a ticket… Doh… 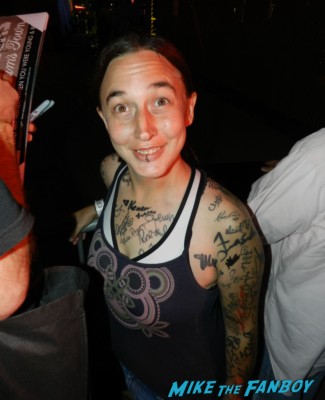 Melissa loves to get celebrities to sign her body and get them tattoo’d on. She actually got Ronnie to sign her earlier in the day. 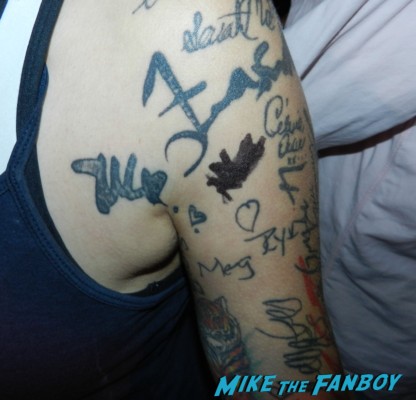 7:43 p.m. – Scotty has tons of crap for The Killers as well. Vinyl, posters etc… I have a picture disc for Brandon Flowers, and a mini poster as well. But the coolest thing I have is a large vinyl banner for Day and Age. Personally, I love Day and Age, I thought it was an amazing album.

8:01 p.m. – The band is onstage! Damn, I have to tell you Brandon Flowers sounds great! The new songs are awesome.

8:11 p.m. – The lights look so awesome with the mist and smoke. God bless Hollywood! 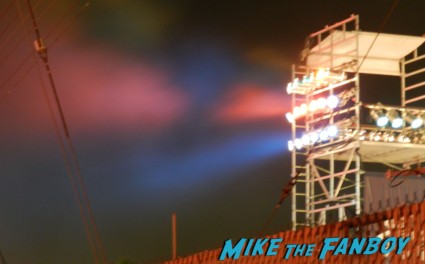 8:15 p.m. – They are really playing to the crowd. Human is one of my favorites as well, and even though I can’t see the band, let me tell you… They sound awesome! 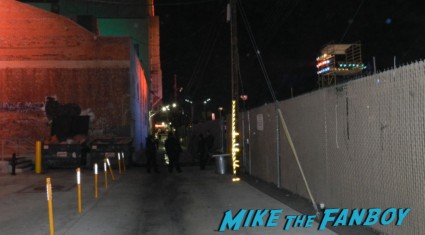 We yell out and Brandon Flowers comes on over. He pretty much signs one or two things each. 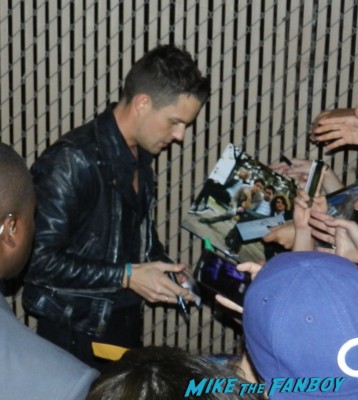 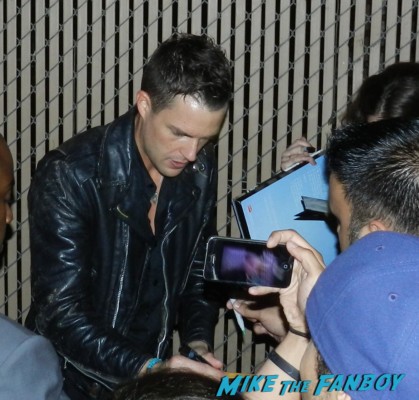 He starts on one end and goes down. I got him on my picture disc and then asked him to sign the banner as well. 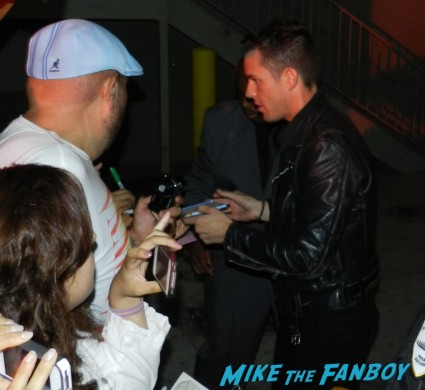 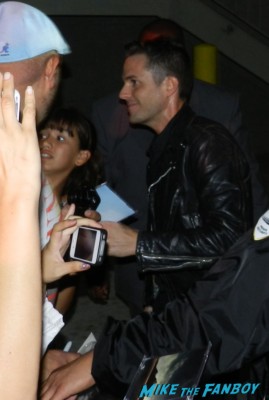 He was like, “Sure.” I’ve met Brandon a couple times and he’s always nice, not necessarily chatty but nice. He makes sure and goes down the line and signs for everyone. 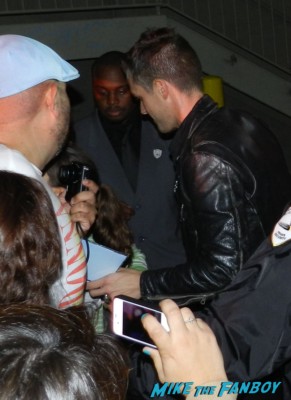 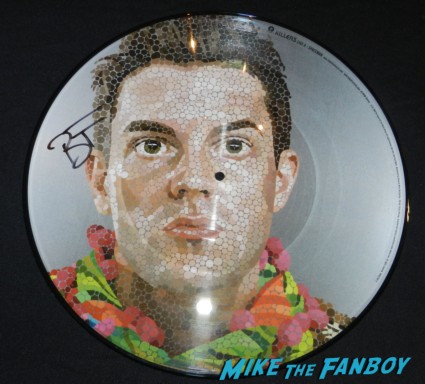 8:40 p.m. – Scotty and I hang out for a bit to see if we can get anyone else from the band. I’m not sure if we are though. That’s one thing about starting a poster with an entire band, you always miss one or two people.

8:45 p.m. – We’re waiting. Scotty is missing Dave and Mark who see to be the two hardest people in The Killers to get. 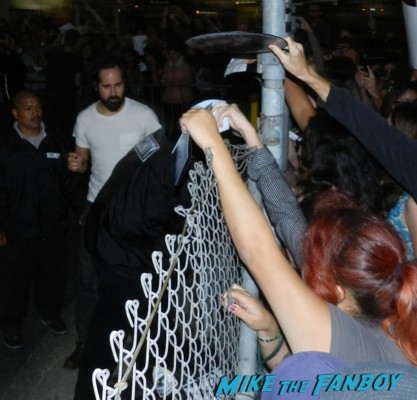 We run over there, and I’m able to get Ronnie on my large banner as well as my mini poster. 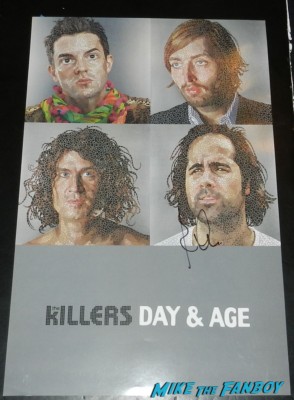 I have another picture disc that Scotty got Ronnie to sign because he didn’t have anything left for Ronnie. 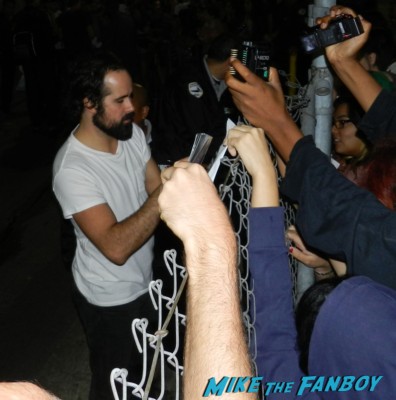 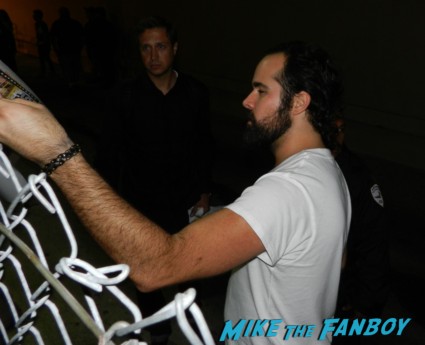 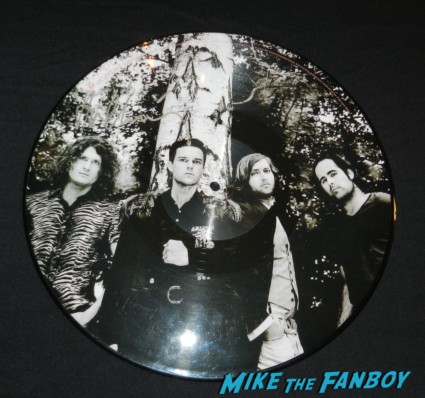 Brandon signed and signed. I swear he is really cool with the fans which is something I really appreciate! Ronnie is also really nice but I wish Mark and Dave would be a little more fan friendly. Maybe they think if Brandon is out there with the fans they don’t have to be but when you’re a fan of a BAND it’s more than the lead singer. 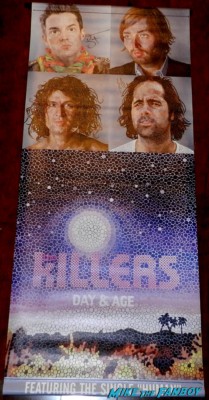 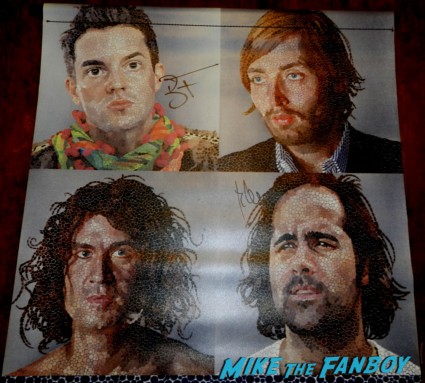