B… The letter B… I had to actually think of what Sci-Fi and Horror movies started with B. I certainly haven’t gotten as far as DVD Dave!

For the second letter in his countdown, Dave has included a ton of awesome movies, how could I have forgotten Battlestar Galactica? How I ask you?!?

Check out DVD Dave’s recap after the jump!

Welcome back to the ABCs of Horror Sci-Fi! This time we’ll be delving into B films. Not bee as in a honey producing insect, nor movies based upon Andy Taylor’s favorite aunt. No not Andy Taylor from Duran Duran. But come to think of it Duran Duran DOES make an appearance of sorts in this article. Depending on how you look at it. Ain’t it amazing how things can all be brought together in a neat package? On to the DVDs!

1. BAD DREAMS: You may have never heard of this horror film but if you are into movies about weird homicidal cult leaders (and come to think of it, what cult leaders AREN’T homicidal?) then you might want to seek out this movie. It stars Jennifer Rubin From “Nightmare on Elm St. 3” fame) as well as legendary genre actor Richard Lynch. DVD was signed by both Rubin and the late Mr. Lynch as well as Bruce Abbott and Dean Cameron whose main claim to fame was as the Spiccoli wannabe in “Summer School”. Give this movie a chance if you see it. 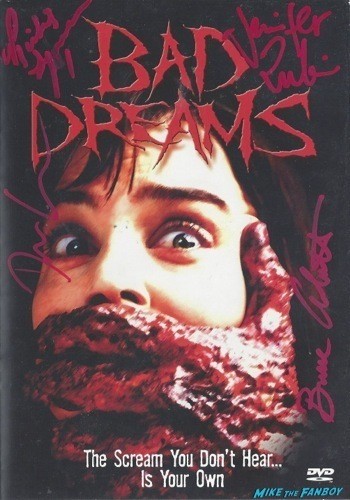 2. BAD SEED. Creepy movie about a creepy girl. Made in the 1950’s. Patty McCormack may have seemed like a nightmare back then, but she is a darling compared to some kids nowadays! Met Ms. McCormack at a Fangoria convention (Weekend of Horrors R.I.P.) back in 2005 and she was very sweet to sign for me. You can still catch her sometimes on the convention circuit! 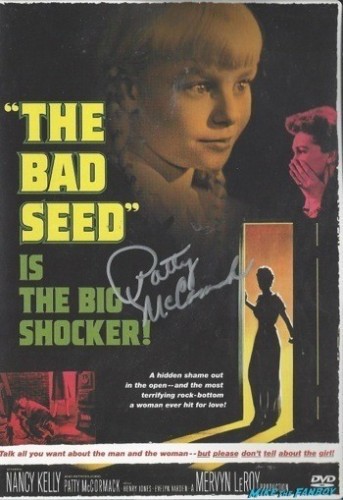 3. BARBARELLA: Campy yes. Classic camp…most definitely. Jane Fonda signed for me. Wasn’t sure if she would scoff at it, but she had no problem at all signing it. Besides this movie was the inspiration behind Duran Duran’s band name. So it can’t be all bad! 🙂 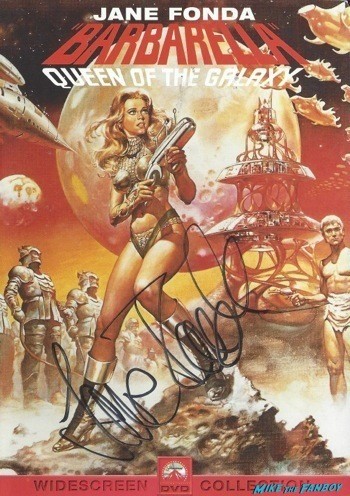 4. BASKET CASE: Definitely not everyone’s cup of tea, but I love it. Signed by director Frank Henenlotter and actor Kevin Van Hentenryck at a DVD signing and a convention respectively. I wish I had taken Parts 2 and 3 for Kevin because he was not charging an arm and a leg like some crazy celebs do. But I’m not gonna start bashing Sly here. 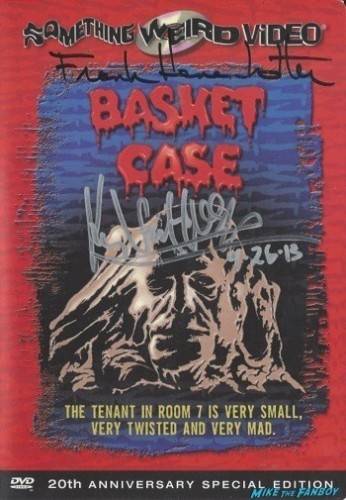 5. BATTLESTAR GALACTICA: Back in 2003 I believe there was a HUGE Battlestar Galactica convention here in Los Angeles. It had tons of the cast in attendance. It is where most of my signatures on this DVD sleeve came from. This is back before Herb Jefferson Jr. was “that guy who always shows up at a con but no one asks for his autograph so he just reads the paper instead”. Richard Hatch was there. Dirk (Faceman) Benedict was there. Laurette Spang, Terry Carter, and Noah Hathaway were there. Even Patrick Macnee and Sarah Rush were there. Oh yeh so was that guy who reads the paper at his table since he doesn’t have a huge demand. Did I mention that Rick Springfield, Jane Seymour and Ed Begley Jr. were there? Good, because they weren’t. Well…maybe Ed showed up unannounced. You never know with him. All 3 however DID sign as well for me. Rick was at a CD signing at a bookstore. Imagine if you can, Hearing pop superstar breaking out his hit “Jessie’s Girl” as a barista in the distance churns on the espresso machine! 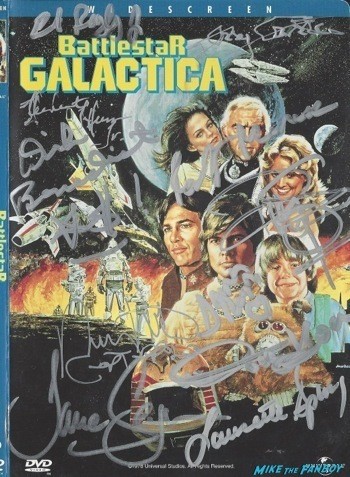 6. THE BIRDS: Ah to have gotten the master would have been a dream. But since I never got Hitchcock, this will have to do. Only met Rod Taylor once…way back when the Hollywood Show was owned by Ray and Sharon Court and it was in a small room at the Beverly Garland. Ahh, the good old days! Even though Rod is not out and about, you can still occasionally meet Tippi Hedren and Veronica Cartwright at conventions. Get them while you have the chance! 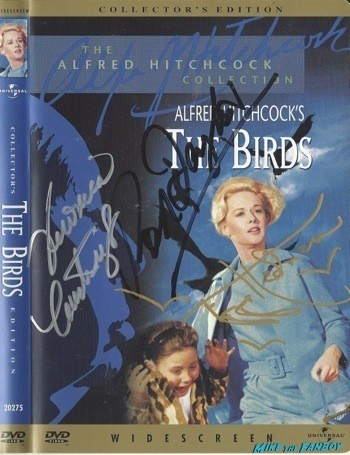 7. BLACK CHRISTMAS: Forget the remake this is the classic. Director Bob Clark had a knack for making movies that would later become cult classics. Who else can claim to have hits in the genres of horror, teen sex comedy, and family holiday classic? The director of Black Christmas, Porky’s and A Christmas Story. THAT’S who! Unfortunately Bob was taken from us way too soon. His films are his legacy and they still hold up. Clark signed and wrote “Merry Xmas”. It has also been signed by Margot Kidder, Nick Mancuso, Olivia Hussey, John Saxon, Kier Dullea and the great Andrea Martin. 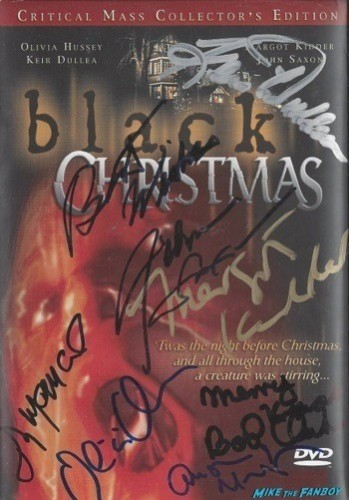 8. BLADE RUNNER: Hands down my best in the B category. I’ve been working on this so long that I have the old snap case edition. Not so much who has signed it, but rather who HASN’T signed it. Edward James Olmos, Daryl Hannah, Joanna Cassidy, Rutger Hauer, Sean Young, James Hong, William Sanderson, M. Emmett Walsh, and director Ridley Scott signed cover in silver while the stand out in blue is none other than Rick Deckard himself…Harrison Ford! The cover was so full that when I asked Joseph Turkel to sign he opted to sign the plastic flap! Heads up! Rutger signed this for me free at a book signing back in 2007. Flash forward seven years he is at a convention charging $50 for an autograph (MORE if you want a photo opp as well) It’s fine to sign for charity, but $50?!?!?! 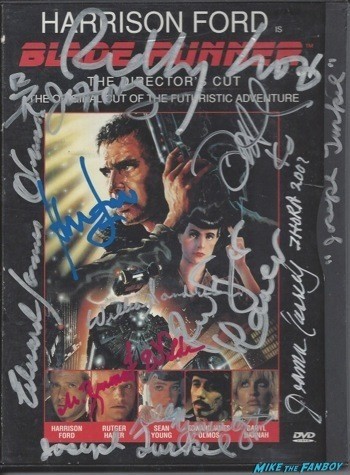 9. THE BLAIR WITCH PROJECT: This independent film surprised everyone and became a huge success and inspired countless annoying parodies. It’s funny that some people actually believed this was a real documentary and that the characters in the film truly perished. In 2005 Joshua Leonard and Michael C. Williams signed my DVD at a screening. It was later signed by one of the directors Daniel Myrick and finally by actress Heather Donahue. 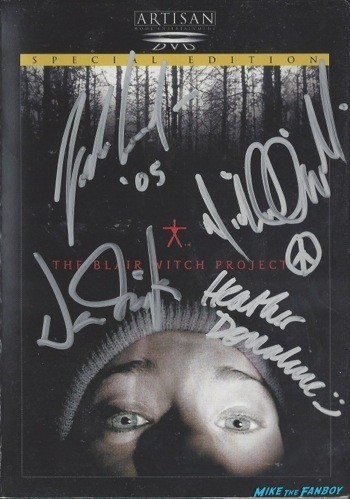 10. THE BLOB: This movie gives me hope that not all remakes are bad. This remake blows the Steve McQueen original out of the stratosphere. If you have never seen this film I highly recommend it. This was signed by Shawnee Smith, Kevin Dillon, Candy Clark, Michael Kenworthy, Art LaFleur, writer Frank Darabont, and director Chuck Russell. 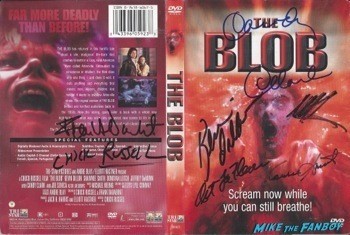 That wraps up another letter. 2 down 24 to go! If I left any out that you think are autograph worthy leave me a comment. See you next time!