Wilkin wakes up to Jessamy’s piercing blue eyes. She is so meek and fragile, yet she possesses a sense of eeriness. Jessamy is capable of a lot more damage; she has lost herself in her commitment to the allusion. Wilkin constantly struggles to approach the matter with great sensitivity; but at the end, you just can’t reason with crazy.

Lady Love receives the official proclamation from the King announcing her pregnancy. She advices Isabel to post it up to inform the Shire. Isabel is the perfect friend; she suggests a berry picking trip to raise Lady Love’s grim spirit. They head out to the field, but the Knights insisted on accompanying them due to the nature of recent events. However, Lady Love’s stern words grants them some much needed alone time outside the castle gates.

Before posting the proclamation to the public, Leon takes the scroll to Milus. Even though Lady Love is in charge, the Knights still bring every matter to the Chamberlain’s attention before carrying anything further. Leon knocks on the door of a pretty crowded chamber. The doors finally open; not to our surprise, the twins walk out. However, they aren’t alone; they were accompanied by a maiden three apples tall and a cage filled with rats. An entire freak show just walked passed the silenced Knight. Milus sure is a kinky fella who knows how to party. This is what happens when you don’t have cable. Leon fails to keep a straight face. Seeing his riddled face, Milus keeps his explanation short, “Tis best left to the imagination.” I bet it does! 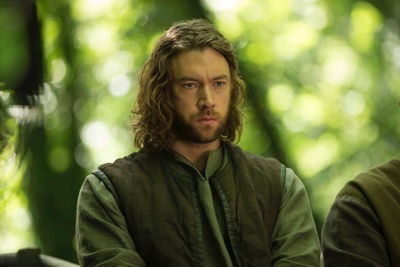 After freeing themselves from the Knights, Lady Love and Isabel skip along the field to have a fun girl’s day out picking berries. Of course, just like all girls, they talked about different kinds of berries; the one on trees and the ones on Knights. After spending time picking sweet treats, they take in the breathtaking scenery. Sick of being trapped in the castle, Lady Love seeks adventure in any way possible. Speaking of thrilling adventure, on their way back, both get kidnapped by the rebels.

Lady Love is unmasked inside familiar ruins with a familiar face looking down at her. Gruffudd is Lady Love’s half-brother. He is the well-known “Wolf”, the leader of the rebels. A brother sister reunion is never complete without some good old childish banter. After getting that out of the way, they move on to business. On opposite sides, they fight for the same cause; a Wales, free of pain and bloodshed. Gruffudd requests funds to organize the rebellion with proper command and care. In hopes of restoring peace, Lady Love agrees to help her brother, Gruffy. 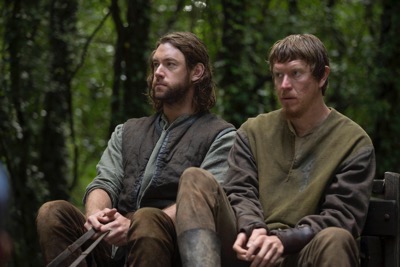 Wilkin and Toran smuggles weapons out of the castle by hiding them under sacks of grain. Of course Jessamy shows up with more than a few questions about their journey. Wilkin claimed they are out to the rock beds to trade grain for sharpening stone. Unsatisfied with his answer, Jessamy presses on, “Who will be there? Anyone fair or familiar?” Wilkin was confused, but Toran knew the exact nature of her concerns; he put her at ease by stating their business is only with the quarry men. As soon as they take off, Leon posts the King’s proclamation outside the castle walls. People gather around, and good old Father Ruskin announces Lady Love’s blessed news; Ventrishire has an air. Not sure what’s going through Jessamy’s twisted head right now, but I know it’s not anything good.

Meanwhile, Wilkin and Toran come across a couple of soldiers on their way over to the rock beds. Knowing that their path crosses the rebel’s hiding hole, they insist on escorting Wilkin and Toran on their journey as protection. Things go south sooner than expected. A bump on the road rustled the weapons raising suspicion of their cargo. The soldier inspected the cart to find the stolen goods, but ended up being part of the cargo. 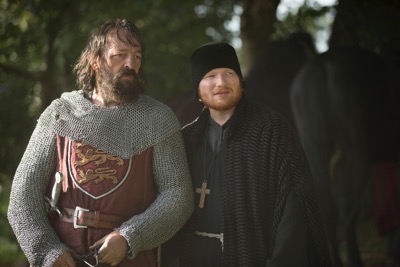 The death of the soldier prematurely advances their plans for vengeance. Wilkin and Toran reach the rebel army, and they assure their safety. Wilkin inquires about the attack on the Baroness. Not having a proper leader, the rebels are prone to cause unwanted chaos. Nevertheless, Gruffudd is gaining leadership among the rebels and promised not to present any harm towards Lady Love.

Back at Ventrishire, Wilkin tries to snap some sense into Jessamy; she maintains her act while Wilkin comes completely clean about everything. Honestly, I feel bad for the kid, Luca. He seems to be the smartest and strongest one in the family. Wilkin goes on to reveal the truth about his true purpose in the Shire and the grim outcome of their plans for vengeance. He even reveals the truth about Milus, how he holds Wilkin’s true identity in means of controlling him. This woman still turns a blind eye towards the truth. Jessamy might just be beyond any help. This is why we have shrinks now. Wilkin urges her to pack up to flee the Shire after dark. Jessamy storms away, but Luca steps up to the plate. He knows Wilkin is the only voice of reason in his life.

Leon goes in search for Wilkin, but instead Jessamy goes to the Chamberlain requesting his attention. Uh-Oh! This woman will stop at nothing. After setting his getaway plans in place, Wilkin returns home to fetch his adopted family. Luca runs towards Wilkin to warn him, but a little too late. Leon walks up and takes him to Milus; he knows all too well about Wilkin’s plans and is determined to keep him hidden in order to employ his crew to carry out personal deeds beyond the rules of the kingdom. 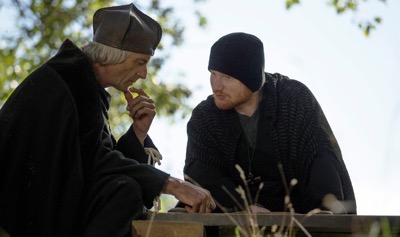 Although she is completely mad, Jessamy really knows how to cook up a good fairytale. She claims that Wilkin is out for vengeance with some of the Knights who looked at her with lustful eyes. Oy vey! Entertained by the story, Milus shares it with Wilkin and Toran. Milus finally reveals his knowledge of Wilkin’s true identity to Toran. He offers them a soldier who took part in the village massacre to quench their thirst for vengeance. In return, Milus expects them to work “unofficially” for him. Left with no other options, Toran finally tortures the soldier to get the names responsible for their loved ones deaths. Out of Mercy, Wilkin spears a blade through the soldier’s heart to relieve him of his pain; “and so we have vengeance”.

The Archduke of Windsor and Sir Cormac has set camp not too far away from the Shire. They are in search of the remaining Seraphim. They form a plan to cover more ground; while the Archduke venture to Castle Ventris, Sir Cormac will lead the rest of the soldiers to greater lands. 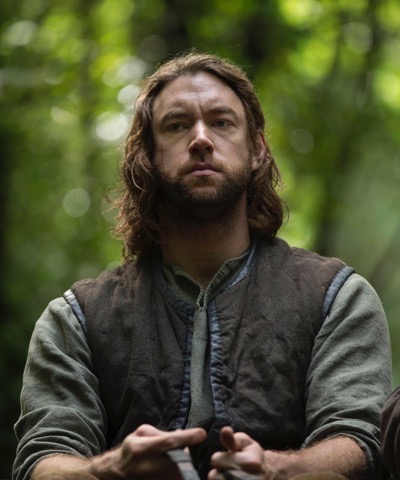 While grinding up her remedies, Annora gets a surprise on her palm. She pulls out a big thorn and her wounded palm heals right in front of our eyes. Unfortunately, the surprises keep coming; she ends up with a hand full of thorns. Annora approaches the Dark Mute with the thorns; he goes deeper into the cave to prepare himself. We never got a glimpse of his true identity or his past until tonight; finally privileged to get a sneak peek into his closet. The Dark Mute is a warrior, a proper Knight.

Clearly, the thorns are a warning sign of the approaching danger. Annora is already aware of the search. She goes to Father Ruskin to warn him about the upcoming peril. Since she is known to be a healer, Father Ruskin dismisses her words assuming paganism is behind her wariness. However, his mind changes as soon as another thorn pops out of her chest. Annora claimed that he will know the danger when he sees it and he will be guided along the way.

Speaking of peril, The Archdeacon of Windsor arrives at Ventrishire in the middle of the night. He claims he is on business to check out his “ever growing flock”. Father Ruskin meets the Holy man in the chapel. Suspicious of the unexpected visit, he keeps a close eye on the newest arrivals. He might have just spotted the threat.

Milus lies to Lady Love about Baron Pryce’s wife. He claims the rebels killed her under the orders of the Wolf. Milus has no desire of peace talks and attempts to widen the bridge. Lady Love still decides to help Gruffudd; she goes down into the tombs to fetch a piece of the hidden treasure. She confronts Gruffudd about Lady Pryce’s assassination, but he denies any involvement. Lady Love might be troubled by the contradicting information, but she gives the benefit of the doubt to her brother. She hands him the jewels to support his noble cause. I guess Milus isn’t the only one with a rebel alliance. Lady Love not only supports Gruffudd, but encourages him to advance his venture.

After having a rough night, Lady Love and Wilkin have their nightly chat in a storage room. Distraught by the recent events, he questions his faith and his own identity. Even though Wilkin finds peace when he is with Lady Love, he denies himself of his true feelings. The Baroness tries to comfort his troubled mind, but he ends up leaving her behind after giving pretty awful mixed signals. Wilkin is pulling off some bipolar antics; his excuse for accidently opening up, “drunken of fatigue”. Lady Love revealed she had a vision of a boy when she first touched him, but Wilkin denies any vision; “I felt only the pain of my wound” Outch! Maybe he is sparing her from inevitable hurt? Maybe he knows deep down that they could never be together. Only time can tell.