Home / Reviews / Murder Mystery is another Netflix’s record-breaking movie: but is it any good?

The new thriller comedy from Netflix looks like it is aiming for the top, but the critics think differently. The main stars in this movie are Adam Sandler and Jennifer Aniston. As it looks like his Happy Madison production company made a deal with Netflix in order to push the movie a bit more.

Adam Sandler had some trouble in the past with some pretty disastrous movies that ended up quite bad for his reputation. If he was once praised for movies such as Waterboy, a flick about a boy who goes from picking waters, to star as one of the best college football bets of his local team, he has been on a downfall ever since, even breaking the record for more nominations on the Razzie Awards.

However, Adam Sandler and Jennifer Aniston have a strong bond and it seems like they are perfect for making fun Sunday afternoon movies. This is not their first collaboration on the set as they did Just Go With It couple years ago which turned out great.

In this film, Jennifer plays Audrey, who is a regular hairdresser, obsessed with murder-mystery novels, and on the other hand, we got Nick (Sandler) a police detective. 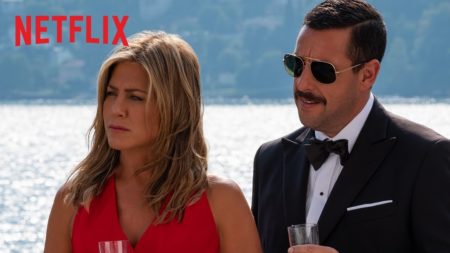 They are going on their honeymoon trip to Europe as the pair encounter the mysterious Charles Cavendish (Luke Evans), who turns out to be a billionaire. He invites them to join him on a luxury yacht with his family for a couple of days in Europe.

They join Charles’s family on the luxury yacht as they travel to Monte Carlo, in Monaco, for their trip. That night, one of the group is killed, and no one knew who did it. Now you get the title Murder Mystery. Everything starts from there as they all try to unveil who is the real killer.

Even though Adam Sandler has made some unsuccessful movies in the past, this one seems like is on the point. The chemistry between both leading actors proves to be enough to carry this film very high. The film appears to be a little lazy, but the real problem is that it comes at the time when all current movies have epic long-lasting stories with high-end production.

However, it did break Netflix’s all-time opening weekend record with 30,869,863 unique accounts watching it in the first three days worldwide. This means that it surpassed BirdBox, which reached 45 million in 7 days.

It is infused with Sandler’s comedy which sometimes can be irritating, but Murder Mystery seems balanced and also the script writing is on point. The story is a bit ridiculous, but it is a comedy movie produced just to put a laugh on your face.

The visuals are great as well as the directing of the whole movie. They visit some breathtaking location in southern France and Italy with some incredible scenery.

Obviously it, not an Oscar-winning movie, there are a few misses in acting as well as in the script. However, it is a very likable and relaxing movie that will bring you back through memory lane. It seems that, although people and specially critics like to diss Adam Sandler, he is streamed for over half a billion hours on Netflix.

Nonetheless, the critics still don’t seem convinced by Murder Mystery and the IMDB rating so far is pretty average, 6/10. Rotten Tomatoes is harsher, giving it just a 45% approval and describing it as “a lightweight comedy that’s content to settle for merely mediocre”.

However, if critics and maybe some more snob viewers decide to give it a thumbs down immediately, some people just accept it as a movie that gives you a fun time and that allows you to chuckle often. If you still haven’t watched it you should make some popcorn and go for it, it’s a great movie to watch with your family on a Summer afternoon.