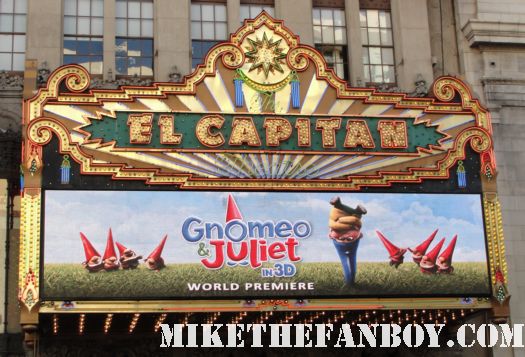 The crack of dawn… When the sunlight peers through the blinds… yep, this is when the lovely Erica decided… “Hey, let’s get to the premiere today!” Sigh… So at 7:30 a.m. yep you heard that right, 7:30 a.m. Erica was rapping at my door. I stirred in my slumber and said something in my Gozar the Gazarian voice and next thing you know I’m behind a barricade for the… wait for it… wait for it… Gnomeo and Juliet premiere… Yep, this is my life.

8:45 a.m. – We just arrived at Hollywood blvd, and surprise surprise no one else is here… sigh… Not even the carpet! Lol… Ah well… 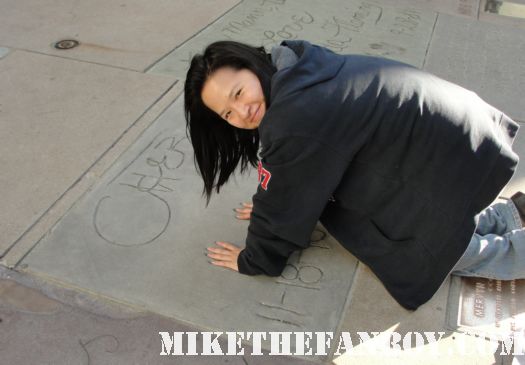 9:00 a.m. – I’m torturing Erica and making her act like a tourist and put her hands in Cher’s handprints. Shockingly they have the same size hands… lol… I always knew Erica had something in common with Gypsies, Tramps and Thieves but I didn’t know this would be the common denominator!

9:06 a.m. – I told Erica we better run and get our spot cause if there’s a madcap dash of Gnomeo and Juliet fans, we won’t have a spot oh dear! Oh dear! 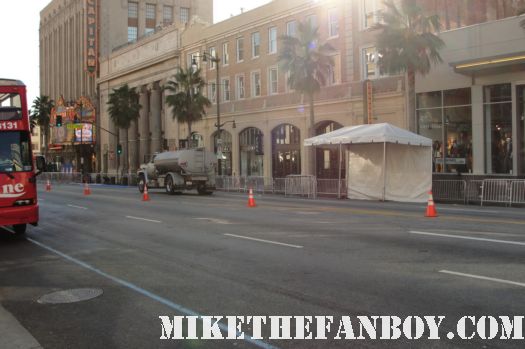 9:18 a.m. – Erica keeps telling me she had her reasons for us getting here so early. It’s her love of gnomes. It really is. And for James McAvoy cause Erica likes him. Lol… I do have a couple posters for him, Wanted with the stunning Angelina Jolie and Penelope the movie with Christina Ricci wearing a pig nose. Don’t judge me.

9:22 a.m. – We’re debating if James McAvoy makes a hot gnome, and what would constitute a hot gnome. I don’t think anyone can make a hot gnome. But that’s just me. Lol…

9:45 a.m. – I just told Scotty he better get here cause there are four of us waiting now! FOUR!

10:21 a.m. – The barricade is starting to actually fill up a little now. The set up is strange. They have us kind of cramped into the side. Right behind drop offs. I have heard that Emily Blunt and James McAvoy are super nice so I think they will both sign.

10:41 a.m. – I have my Sunshine Cleaning and Devil Wears Prada posters for Emily Blunt and a magazine as well. I really like her actually. 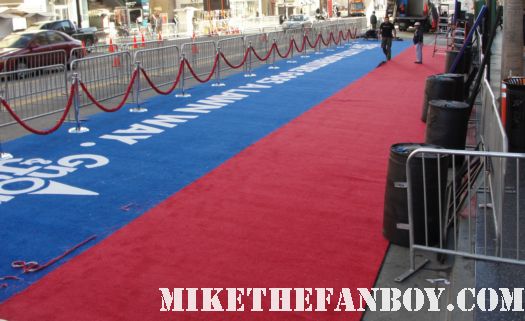 11:31 a.m. – So, the guys are bringing out potted faux pants now… They look a tad sad… lol… I don’t think the moss is going to help. Elton John is supposed to be here today as well. I have my doubts about whether or not he will sign. I just don’t see it. 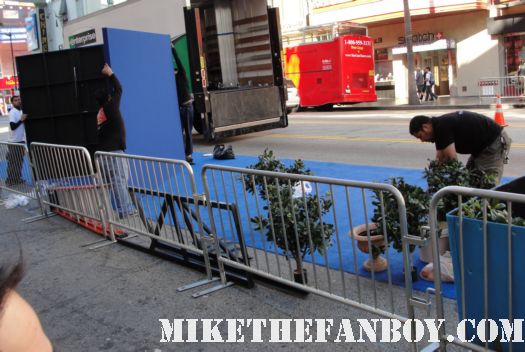 11:41 a.m. – Across the street there is a couple dressed like Superman and Supergirl… lol… I didn’t know the characters were back on the Blvd.! 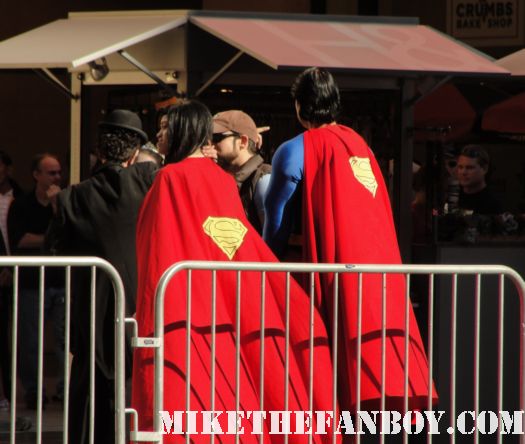 11:43 a.m. – Oh lord… There is a girl dressed like the Black Swan ballerina… Natalie Portman has officially become a costumed character… again… this time for an art house flick… She would hate that! I love it! HEH HEH HEH… 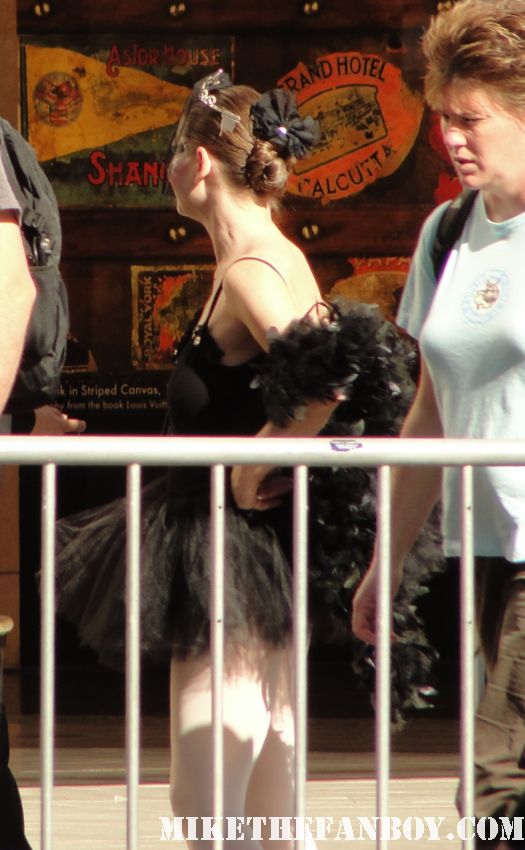 11:54 a.m. – The press are starting to file into their pens… Well the video press that is.

12:05 p.m. – I really would like it if Elton John signs today. I have a couple 45’s for him. I was going to bring some LP’s but I like the 45’s better sometimes. They have different photos/artwork.

12:21 p.m. – Did I mention I’m tired? Lol… Thankfully there are a bunch of cool collector’s here today including, John, Hugo and Mike the Fanboy reader Kurt. So along with Scotty and Erica we have a fun group.

12:34 p.m. – The vacuuming of the blue carpet has begun! Lol… Feverish vacuuming that is. 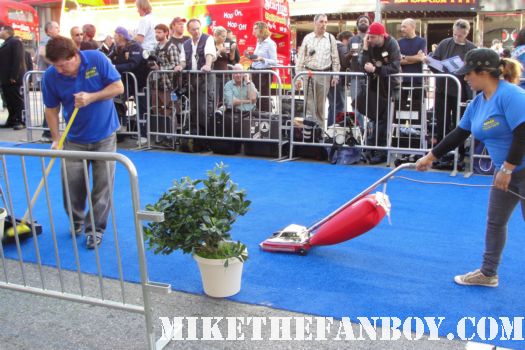 12:50 p.m. – Well, anytime… You can feel everyone trying to get everything ready. They have so many red carpet photographers here they have put us directly behind them. Lol… So, I will be all over Wireimage tomorrow… Sigh… 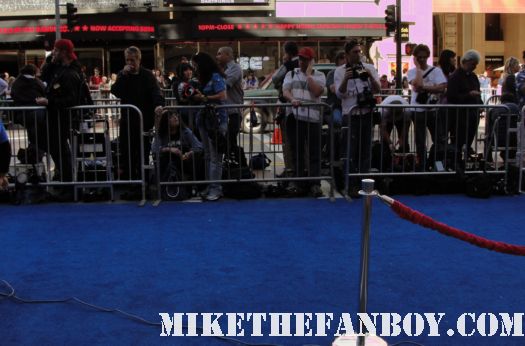 12:59 p.m. – Some audience members have just arrived. There is an older couple wearing a lot of pink… matching pink… Why, I ask… Why! 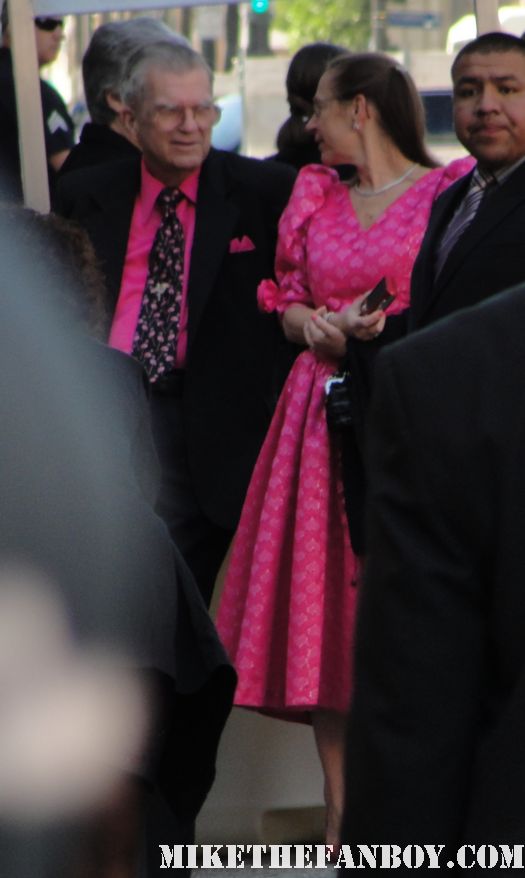 1:06 p.m. – There’s David Copperfield. Presto as if by magic he appears! I didn’t even know he was supposed to be here! Lol… Everyone tries to call him over but he seems hesitant! 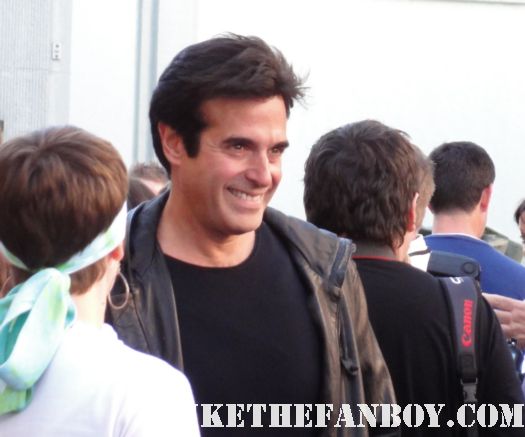 1:08 p.m. – Oh shit! There’s Emily Blunt! Wow, she arrived so quickly, I expected her towards the end of the carpet. Everyone is calling for her; we are competing with the photographers… 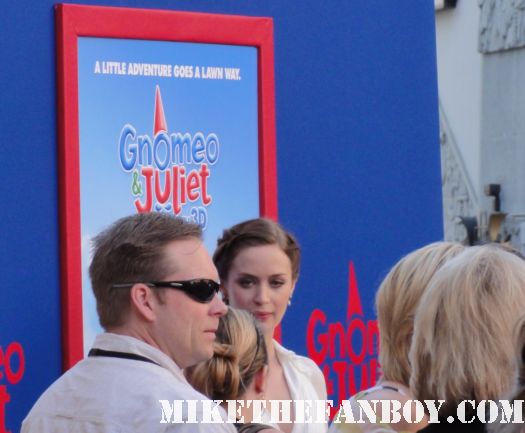 1:11 p.m. – It looks like Emily is going to do the carpet first… Oh wait, she’s coming over! Dammit, I have to get my stuff ready! 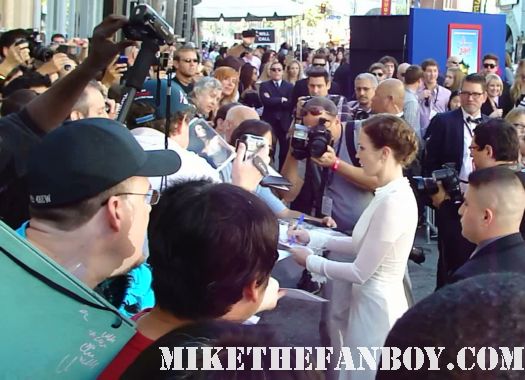 1:14 p.m. – Emily is almost done with the full line now. I mean she really did try to get the full barricade done and did a few photos but not a lot. That was really cool of her. I was wondering with this set up if she would do it, but I am pleasantly surprised! 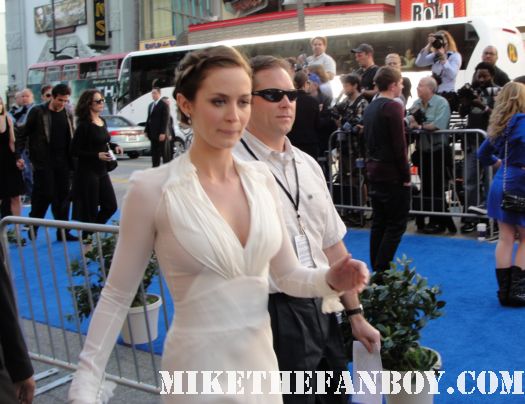 1:15 p.m. – Okay, and now David Copperfield is coming over. He is very contentious about getting pens back to people. Its okay David, we can all get another pen… lol… 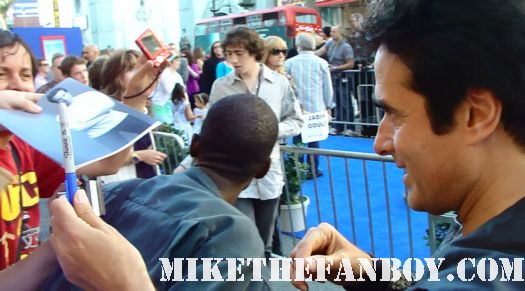 1:16 p.m. – Oh my God, Jen Luc Picard and/or professor X is here! Wow, I didn’t expect to see him! But he comes over and signs a few but Crap James McAvoy just arrived and is coming right on over!

1:17 p.m. – The two professor X’s are on the barricade together! Lol… however they are on opposite sides and Patrick leaves once James comes over. 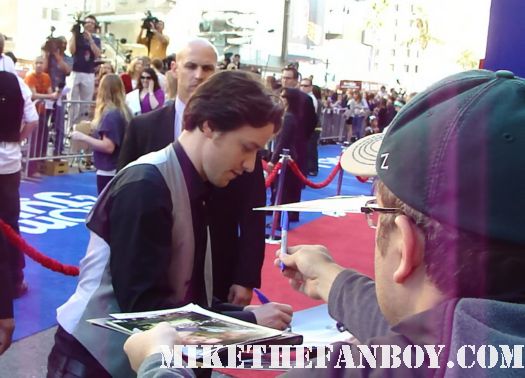 1:18 p.m. – James McAvoy is signing quite a bit. Scotty got him on his Gnomeo and Juliet flyer and then on Erica’s Becoming Jane (blech) poster. He comes my way and I got him on Wanted and then on my Penelope poster. Erica got a rock… lol… 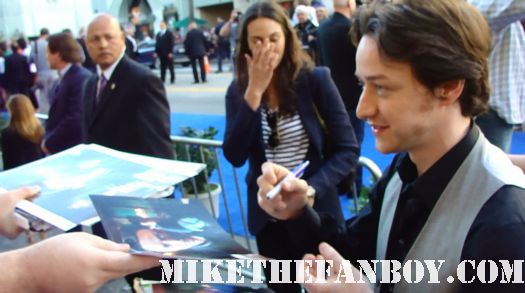 1:19 p.m. – Erica got him on her Atonement poster actually, cause she loves the costume dramas. James is really cool, and seems very nice. He signs quite a bit, and is concentrating on signing. He actually was going to sign lower on my poster then moved his hand cause he would have signed on my Angelina Jolie autograph already on the poster. 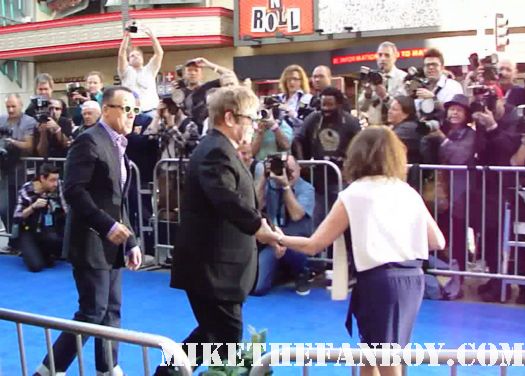 1:24 p.m. – James McAvoy is heading back to the carpet after pretty much getting everyone on the barricade.

1:29 p.m. – Elton John is now going down the carpet. He waved at everyone and said he “couldn’t” sign. Why he can’t sign is a curious oddity. I mean everyone else could sign, but according to Erica that’s why they call it the blues. She has a way with a pun don’t ya know. 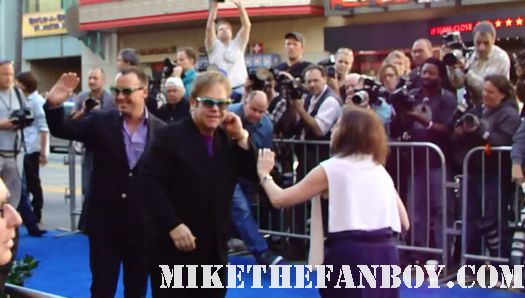 1:34 p.m. – I just spotted Dylan from Modern Family! LOL… Erica and I both brought our Modern Family posters just in case some of the kids showed up.

1:38 p.m. – Dylan is heading in now. Reid Ewing is his name, and he seems like a cool guy. Erica and I stopped him and he was shocked we could put together this was a Disney premiere and since Disney was owned by ABC some of the Modern Family kids might show up. He signed Erica’s poster, well… He signed half of her poster and also signed half of the board it was taped to. Lol… On mine he signed the full thing. He was cool though, and very much Dylan in real life. 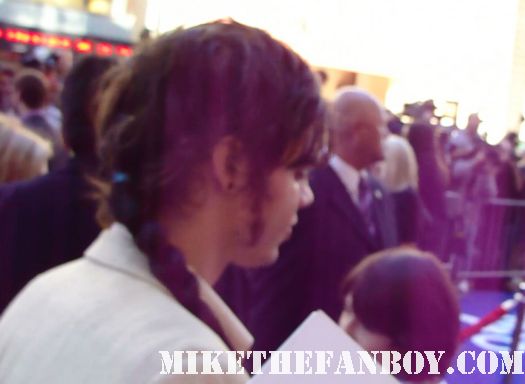 1:41 p.m. – Well all the cast is now inside… so it could be over… Oh Wait, there’s Sharon Osbourne! Dude, is Ozzy here, cause I have this kick ass lithograph for him and I actually brought it!