Home / Conventions • Orphan Black • Outlander • The Lovely Erica • TV Heartbeat / TV Heartbeat Comic Con Panel Round Up! Catch Up On All the Panels and Footage You Missed!

Despite Mike’s omission of me in every Comic Con post so far (ahem!), I was, indeed, in sunny San Diego basking in all the fun and the crazy! For everyone that actually did miss out on the fun, some networks and studios have posted videos so read on and enjoy!

Saturday was all about Outlander and Alicia (aka The Novel Strumpet) and I will, of course, have a full report with exclusive interviews, a recap on the panel (there was whiskey and a pirate), the signing and floor coverage (including men in kilts). Good times!

If you just can’t wait, here’s a link to the panel which Starz has kindly made available to all:

Clone Club was in session for one last time with the season three cast! (Farewell, Paul!) They are such a fun group together so enjoy the panel here:

You can also view some of the, um, unique trailers which were unveiled at the Orphan Black off-site event – Alison’s Victory Brunch. There’s the telenovela trailer, the Friends-like comedy sitcom trailer and the horror trailer. Also, don’t forget to view Donnie’s post-election speech as well!

If that wasn’t enough fun, they shared a blooper reel for season 3!

Ash vs. Evil Dead announced its premiere date on Halloween (just too perfect!) and also rolled the first trailer for the show. There’s so much love for Evil Dead and its stars! Luckily, Starz has also posted this panel so more people can enjoy the fun. (Especially since it was squeezed into a tiny room in San Diego).

If you’re wondering about the button Bruce Campbell is wearing, it says “Groovy” – I know because I gave it to him during the signing when he looked at my Ash vs. Evil Dead shirt in envy. I couldn’t exactly give him the shirt off my back, but I did give him the button which Bruce immediately asked Lucy to pin it on him! 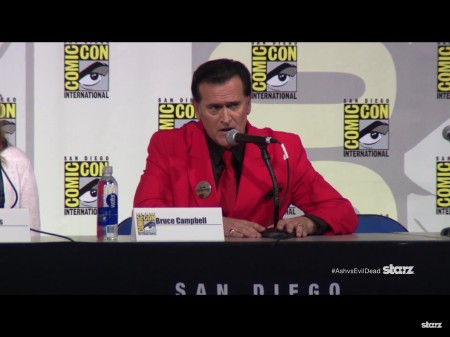 Yep, Ash is back! (Side note: if you didn’t love Bruce before, you have to give him mad props for bringing is own pens to the signing. He also brought them out and primed them for himself and also Sam Raimi and Lucy Lawless. You have to love a guy who takes care of the fans…) 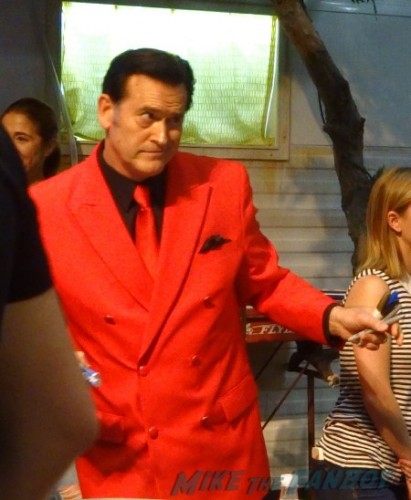 The Walking Dead was back with its annual debut of next season’s trailer – looks like the Ricktatorship is back! The new season begins October 11th!

This year we also get a first look at the new series with the cheesy title, Fear the Walking Dead. This one is set as the plague is starting up and will debut on August 23rd.

The new show from Sons of Anarchy creator Kurt Sutter has just started production, but they came prepared with a trailer for the show which takes place in medieval England.

We also got our first look at the newest edition of American Horror Story including an extremely fleeting glimpse of Lady Gaga:

MTV is stepping into the land of literary fantasy with a new series based on the Terry Brooks Shannara books. From the early trailer, it looks like MTV is going big on this one! It looks amazing and is set to debut in January of next year and stars Austin Butler, Manu Bennett and John Rhys-Davies

The Man in High Castle

Amazon was stepping up its SDCC game by bringing a few shows this year. One of them, The Man in High Castle, debuted a new trailer for this show based on a Phillip K Dick novel. In this world, the Allies lost WWII and the world is still under Nazi control. Creepy and fascinating…

Most network shows haven’t started filming yet so that’s why there’s not a lot of new footage for long-running shows. Some new shows screened their pilot episode, but DC’s Legends of Tomorrow didn’t film a pilot so they showed some test footage that’s been cut into a trailer for the new DC/The CW show that melds various heroes from Arrow and The Flash together:

Feel like you’re getting caught up on what’s new and shiny in TV? I’ll be back with our Outlander coverage and what in the world is Conan Bingo!?!?