After a triumphant first season, The Librarians will be back for a second season on TNT starting November 1st. Rebecca Romijn (Eve Baird), Christian Kane (Jake Stone), Lindy Booth (Cassandra Cillian), John Kim (Ezekiel Jones), John Larroquette (Jenkins) and executive producer/director Dean Devlin dropped by New York Comic Con to talk about where the story will go in season 2 and possibly beyond. 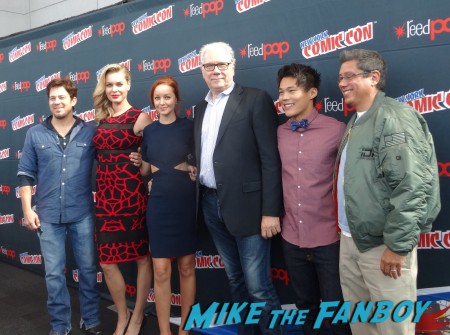 Since we left The Librarians, “they have been off on their solo missions and Flynn and Eve have been off adventuring together all this time” explains Rebecca. “Eve is a little bit torn between running off with him and sticking with the Librarians-in-training who have really become her family.”

Executive producer Dean Devlin sets up the premiere episode: “They’ve all been off on their own doing their own things. They’ve gotten quite successful at it and they’re quite used to it very much in the way that Flynn has. But they discover, literally in the first episode, that there is a special dynamic when they are together and that starts to affect how they move forward over the course of the season.” 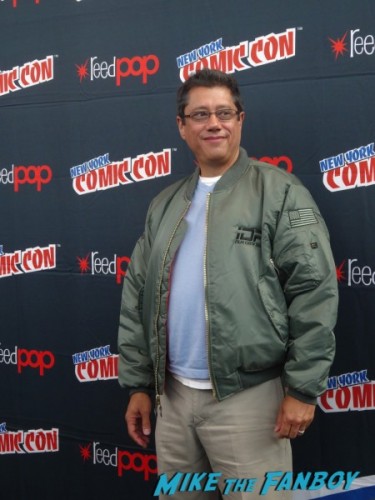 But things aren’t so easy in the Library which John Larroquette describes as “messed up. It’s dysfunctional. And [Jenkins] tries to keep it from the others for a while so they don’t get worried. He thinks it’s his fault; that he wasn’t able to keep it together. When it comes back, some rooms have disappeared. Some rooms are literally upside-down. Some rooms are not where they’re supposed to be. His job is to try to wrangle them all back and eventually he solicits the help of Flynn Carson. But it’s really messed up.”

All that time Flynn spent adventuring with Eve in between seasons hasn’t quite blossomed into a relationship. Rebecca believes that “Eve and Flynn are romantically like ships in the night. When he’s feeling affection for her, she’s not noticing. When she’s feeling affection for him, he’s not noticing. We’re just on two different pages. She’s a strategist. She’s a planner. She does everything by the book. He’s somebody who flies by the seat of his pants and it drives Eve Baird crazy. She’s off running with him around the world, and she misses her Librarians-in-training. He’s still on the fence about accepting them as full-on Librarians. So he’s less interested in re-visiting with them.” So, like last season, we’ll see Flynn Carson (Noah Wyle) in half the episodes. 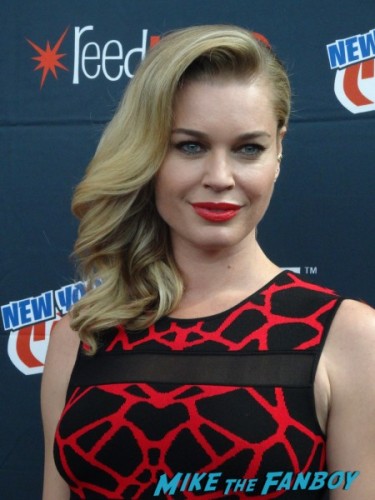 Since the Librarians are more of a team this season, we’ll get to know them a little bit more. Christian is excited for us to learn more about Jake Stone since “all the cards are on the table and you see what he went through and the Library becomes the only family that he’s going to have…With realizing what’s going on with Jake’s back story, [he] starts maturing a little more. The furrowed brow comes back a little bit.”

But Jake won’t be singing this season, but maybe in later seasons, as Christian muses over the idea: “I don’t know if they’re going to let me sing on this show. Not this year. I bet you season 3 something will roll around because they’ve got to take advantage of that. I’ve got my fans (but I call them friends and family), the Kaniacs, and they love the music so they’d be foolish not to.” 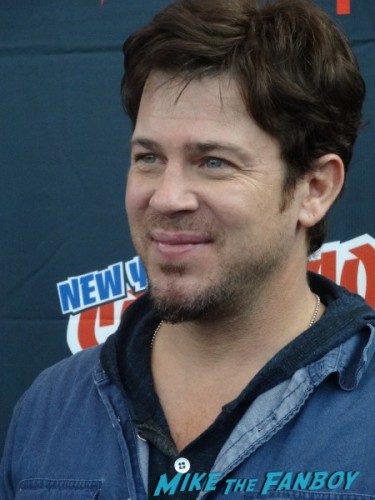 Cassandra’s health was a major weakness for her in the first season but now Lindy says “she’s found a way to make that a strength. She’s found a way to live without fear because she knows what’s going to happen. It’s the worst possible thing.” 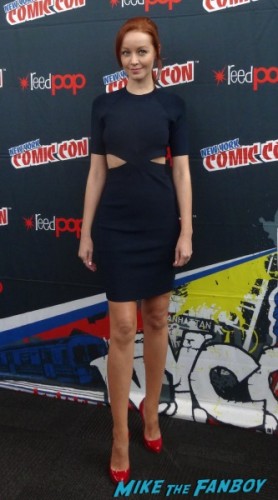 Even rascally Ezekiel (or as John Kim bluntly describes him “He’s a wanker. You can say it”), will grow with the “time loop episode where you’re going to see Ezekiel’s maturity and his leadership qualities come to play. It’s the first time he’s been given the steering wheel of the ship, sort of speak. You’re going to see how he navigates that and whether or not he does it well.” Rebecca teases: “We had a lot of fun shooting that one and there’s a great twist” so keep an eye out for this episode late in the season. 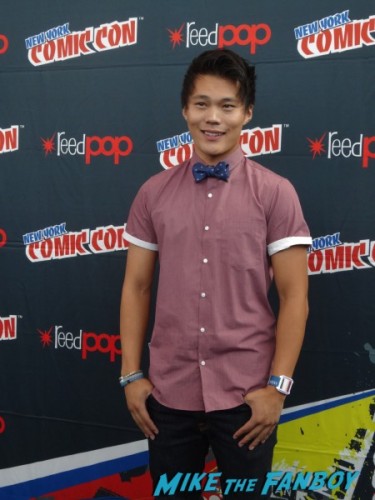 We’ll even learn more about crusty Jenkins since Larroquette had some conditions on the character when he first signed up last season: “I said to Dean when I was first offered this job, ‘I don’t want to become Alfred in the Batcave or John Hillerman in Magnum P.I.’” In fact, Jenkins will actually leave the Library grounds and take on some of the bad guys this season.

The villains this season will shift away from the Brotherhood of the Serpent and focus on “fictional characters that have come to life,” says Dean. “To some degree, they are confined to the narrative of the books they came from. When they start to break that narrative, the Librarians don’t know what to do because that shouldn’t happen. That becomes the dangerous part of it and the most intriguing part of it.”

The cast loved this turn since, according to Christian “there’s no rules and you never know who the bad guy is going to be there. So there’s a lot of fun to get into the script and find out which fictional characters we were fighting this week.”

A couple of those villains include Prospero (from The Tempest) and Moriarty from Sherlock Holmes. In fact, John Larroquette is pleased that “Jenkins goes head to head with them because he’s even older than they are. …. I figure he’s about 1200 or 1300 years old; he’s been around for a very, very long time. So much of reality washes over him without much trouble because he’s seen so much of what’s gone on in the world.” 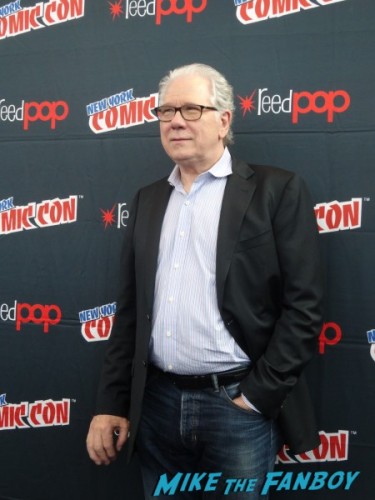 Should this season go as well as expected, Rebecca informs us that showrunner John Rogers has a “5 year plan.” While the cast doesn’t know the specifics, Christian believes that last year’s season finale with the alternate universes was a preview of the future: “If you saw the end of last year, that’s what would happen if were all the Librarian for 10 years. We know where we’re going. We’re going to get to those characters. So it’s fun because now we have a path.” 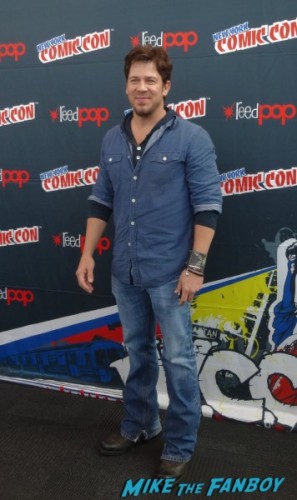 Until we hit those future seasons, we can enjoy the chemistry of the cast. Christian states: “In this season, we all have to come together as a family. It really is us having the most fun on screen and I think it bleeds out into living room and I think that’s why people enjoy the show. This year, honestly, even though I love last year, I think this year’s 10x better because we had such camaraderie and we had so much trust.” 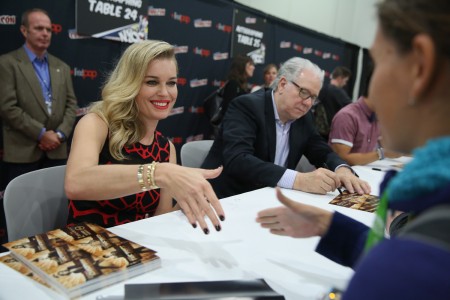 Yes, the cast still endlessly picks on John Kim since, as John agreeably states “that’s something that will never go away. I bring it on myself half the time.” But he agrees that they are quite close: “We have such great relationships off screen. Lindy and Rebecca have actually housed me for different periods of time. I’m a perennial couch surfer. Christian and I have a great relationship. John [Larroquette] and I get lunch from time to time. Noah and is just the greatest guy ever. We’re so lucky.”

Lindy also agrees and believes that “it shows in the work too. You get the sense that these people really do love each other and are able to figure each other out. It’s so much fun for us to play with, really.” 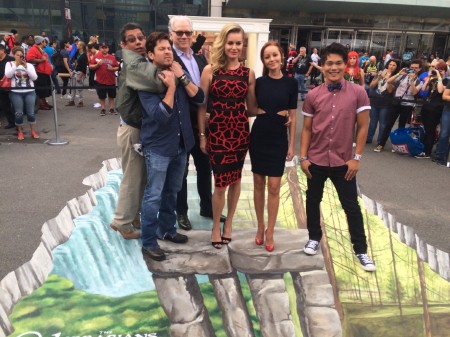 In fact, Dean professes: “Honestly, I’ve never had more fun making anything than The Librarians. If I could spend the rest of my career only doing The Librarians stuff, I’d be the happiest guy in the world.”

The second season of The Librarians begins on Sunday November 1st on TNT. 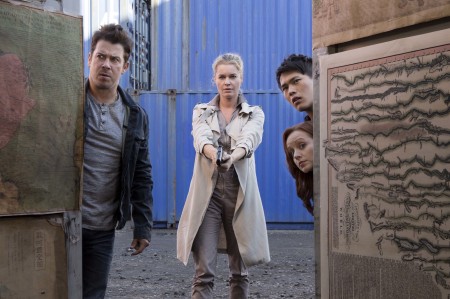