Home / Fanboying! / Two and a Half Men Star Ms. Holland Taylor is a Class Act to Our Man on the Streets of Texas, Chuck! 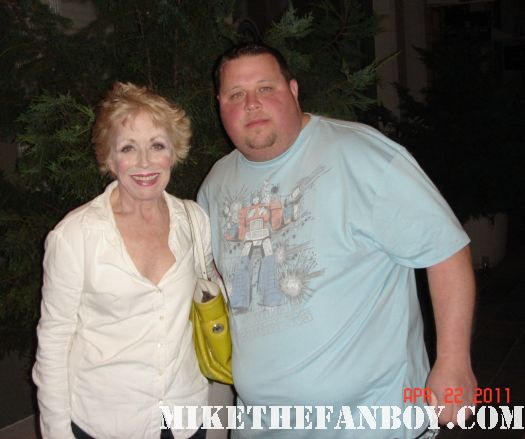 Character actors are so underrepresented by the world of fandom, and I really mean this. Personally, I love character actors so much; they can make a movie hysterical! Or when the case calls for it sad and perhaps poignant. One of my favorites is Holland Taylor. Now a lot of you know her from Two and a Half Men, and we know what drama is going on there with Charlie Sheen right now! Lol… I remember Holland Taylor from Bosom Buddies, and Legally Blonde… Oh, and this super short lived but awesome sitcom called the Powers That Be with John Forsythe. I have so much useless info in my brain, I just can’t help it!

Anyway, our main man on the streets of Texas, Chuck is a huge fan as well, and spent a whole evening trying to track down Holland Taylor!

I got to the venue around 9:45pm and waited for the show to be over.

Finally around 10:20pm people started leaving, so I got up by the stage door to wait. Well I waited until 11:15pm and nothing. Even people who worked at the venue were leaving. Finally a guy comes out and asked me if I was waiting on Taylor and I said I was. He told me she had left out another door, but offered to get my stuff signed and told me I could come back and pick it up.

Finally, she looked over my way and I asked her if she would sign for me. She said, “Sure.”

She really liked my 11×14 photo and said so. I also got her to sign a smaller photo for a buddy of mine.

Overall, I had to work for this one, but it was worth it.

Check out my photo with her.