As you all know I’m a huge fan of Vikings! Seriously, if you haven’t checked out the show do so now! It’s awesome. I’ve turned so many people onto it, I can’t even tell you, and now they’re like… I’m hooked!

Vikings is taking over SDCC. I just got this awesome list of events that they are doing, including a cast signing (if anyone goes, drop me a line cause you know I’m all over that!), swag, panels, etc…

Plus, this is the cover of the promo Vikings comic book being given out at the con! I need to pick up a few of these… 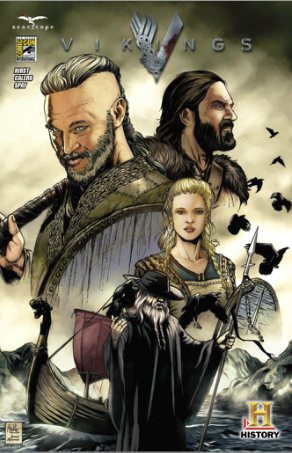 Check out all the info below guys!

·       VIKINGS COMIC BOOK – Check out the link below for a sneak peek of the first-ever VIKINGS comic book written by series creator/writer Michael Hirst. The comic book will be given to select fans attending the below VIKINGS events at Comic Con.

·       7/18-7/20, 11 a.m. – 8 p.m.  – VIKINGS INTERACTIVE WATERWAY – The experience includes miniature Vikings “ships” that fans can race on actual water, a Photo-Op area for keepsakes, and Lagertha-inspired shield maidens who will greet visitors. The waterway is located across the street from the Convention Center at 450 Second Ave., between 1st & 2nd Avenue.