‘Hakuna Matata. It means no worries!” Ah, who can forget that classic line right? I mean it’s ingrained in a generation of kids and adults alike… This could only be from the animated Walt Disney classic The Lion King! Now, it’s being rereleased in 3d! Now, I’m not a huge 3d conversion kind of guy, really… but a lot of time animation can really sparkle when it’s converted….

So, when the Walt Disney Co. invited Mike The Fanboy to check out the new Lion King in 3d we just had to check it out and see what this was all about!

Check out what our newest Mike The Fanboy contributor Cal has to say about the Lion King in 3d after the jump!

Watching The Lion King in 3D is a lot like watching anything I once loved in a new format — terrifying. And its not just the fear of visual changes but knowing that regardless of the “improvements”, it is impossible for me to enjoy things the way I did at 7. Which is one of the downsides to nostalgia. Some Most things don’t age well.

Especially since at a young age you just enjoy. There’s no analysis as to why and it doesn’t matter. At 7 all I knew is that Simba was my favorite character and the monkey was funny, and thats all I needed. And walking into the theatre I wondered what it was that I liked about the original, considering the media blitz it could’ve been anything. The story? The Happy Meal toys? Sitting on the couch eating cereal while watching the VHS for the 25th time? Maybe The Lion King really just represents a slice of my life where I simply enjoyed things. 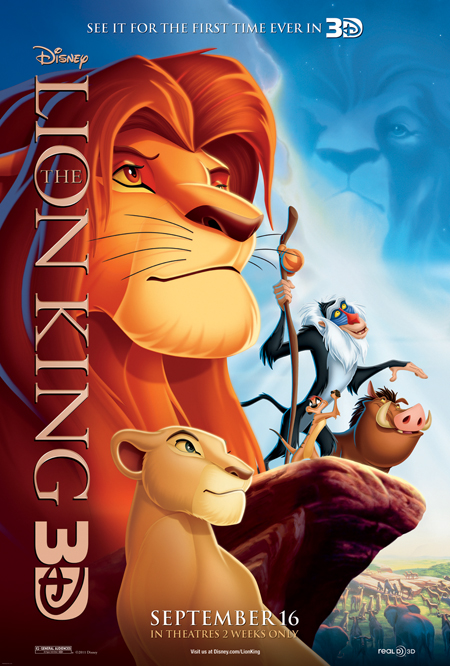 Fortunately, the movie is still great. The humor is still funny, probably funnier than I remember. The story is classic, I actually wanted to see a little more of Simba’s life after he left the Pridelands. They do the Hakuna-Matata scene and show him a little after he has matured but it seemed like immediately Nala shows up and then we have to watch Simba decide whether to be a man or to keep living the easy life. This internal struggle is probably my least favorite part of the movie. The last few scenes also seem to move really fast, but I may just be a bit jaded since each scene in a Co-Bros movie takes 25 mins. Honestly the real treat was watching this movie in a theatre. No cell phones, no window-glare, no competition for my attention. Pure Disney animation all up in my grill. Oh yeah, thats right, they did the whole 3D thing…

Visually, I’ve never seen the 3D format really blow me away. I think its great for a 20 minute theme-park attraction and I think there are some movies that pull it off well (at times). I wouldn’t call myself a hater.. but a skeptic. Anyway, although some scenes do look pretty good with the added 3D layering, it really just doesn’t work. The original did such a great job with musical sequences, changing camera angles, making the lions move and feel like lions that adding 3D just forced my eyes to focus on one part of the scene rather than take it in as a whole. Which sucks for a movie where animators did such a bang up job creating a visually appealing feature without the help of plastic glasses. Ultimately, if the 3D is something that 7 year olds enjoy then this movie is for them, as it should be.

Bottom line: A great excuse to take a kid to the movies and enjoy a little nostalgia but if your like me you might just want to pour a couple bowls of Froot Loops, turn off the phone and stream the original on Netflix.