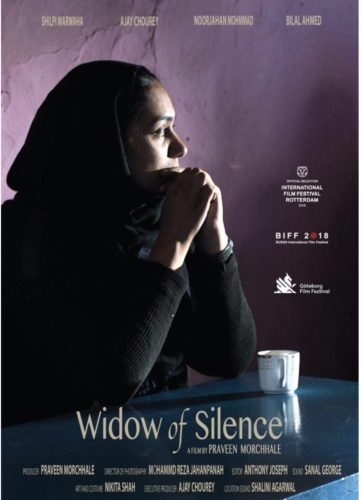 “Widow of Silence” is a stunning story about social injustice with breathtaking cinematography. Clear your conscience and be prepared to open your heart with Praveen Morchhale’s latest effort.

Death doesn’t come easy, especially for widows. Aasia’s (Shilpi Marwaha) husband disappeared several years ago in the Kashmir conflict, which has lasted three decades. Unfortunately, her excruciating experience has made her a half-widow, the bureaucratic name given to women who’ve “lost” their husbands, but have not been legally declared dead. In order for Aaisa to legally gain control of her husband’s estate and take care of her family, including a 11-year-old daughter and aging mother-in-law, she must face an uphill battle trying to acquire a death certificate from a corrupt, nightmarish local government to save her family.

“Widow of Silence” is the third film from award-winning filmmaker Praveen Morchhale (“Barefoot to Goa“ and “Walking with the Wind“). Morchhale’s moving and poignant picture paints a disturbing, distressing situation that goes mostly unnoticed that is devastating thousands in the volatile Kashmir region. Kashmiri half-widows regularly receive harassment, humiliation and are habitually forced into horrendous sexual situations in order to survive. “Widow of Silence” stuns with a remarkable realistic, yet repulsive reality many widows woefully experience. This film fantastically forces a spotlight on a profound plight and the constant contentious culture Kashmiri half-widows endure.

For the last 50 years, constant conflicts and corruption have consumed countless countries devastating millions. “Widow of Silence” is merely a microcosm of what’s regrettably happening in the world. It’s an intriguing, insightful perspective showing another facet of war without the tormenting terror normally depicted in film with blood and guts. The vicious vulnerability men, women and children endure in these constant conflicts create complete helplessness. Physical scars seem easy to identify, but what about the emotional scars and PTSD? The struggles shown in “Widow of Silence” linger long afterwards.

Unfortunately, there are cyclical conversations with the characters and occasionally the tedious dialogue dilutes the situation after already being explained with exposition. Nonetheless Praveen Morchhale manages to overcome obstacles and still shine through with being able to illustrate inconsistencies and incomprehensible predicaments to make them more accessible. The unsettling and deeply disturbing interactions with Aasia and the Register beautifully build the terrible tension and showcase the mounting frustrations of being pushed to your limit. The question is, how much can you bare?

For fans of international cinema, it’s an intriguing movie to experience. However, it’s an extremely heavy subject matter so be prepared. Nonetheless it was a wonderful surprise to discover and experience.