Oh rant time. I wasn’t going to say anything about the Wil Wheaton post he did about autograph “hounds” as he called them. Honestly, I agree with most of what he says. No one should yell at someone if they don’t sign an autograph (maybe the exception should be Natalie Portman because well… ), no one should attack, I could only imagine what it looks like on their end.

I’ve seen the madness, I’ve lived the madness, hell… sometimes I’m in the madness… I always think that people should ask for autographs in appropriate situations. I think outside a party at SDCC is somewhat appropriate. I mean, come on, it’s SDCC and people are everywhere.

However, no one should be attacked or afraid.

But this… This section is what I found fault with.
“Contrary to popular belief, sitting at a table signing hundreds of autographs for several hours without a break is hard. It’s not just mindlessly scrawling my name; It’s stopping and listening to the always excited, sometimes shaking, always sweating, sometimes scary dude who wants to know exactly why I did “X” on episode “Y” and would I please sign his picture in silver, because Marina signed it in gold and now he wants the men in silver and the women in gold, and I hated your character and here are 25 reasons why and I expect an answer for each one of them and I’m not leaving until I’m satisfied.”

Is that really hard? Is it hard listening to fans who paid $25 to $40 bucks for a 60 second swipe of time and a quick scribble? Maybe I’m jaded from my years of working hard (Busing tables, hauling ice, being a bar back, shoveling popcorn at movie theaters, teaching junior high, etc…) but sitting at a table hearing people tell you that they are fans, doesn’t seem like hard work.

Wait… Wait… I’m sorry, I forgot you have to change pens. That’s hard. Signing in silver and/or gold is hard. Check! $25 bucks please.

I’m not trying to minimize the experience he had, but I’m getting just a little sick of the convention mentality. I love cons! LOVE THEM! So much fun, panels, meting people, etc… But I’ve had people share their con experiences with Wil and people don’t necessarily leave with a warm fuzzy, unlike say Norman Reedus who goes above and beyond. 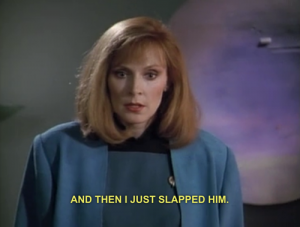 I think a lot of the “convention circuit people” get more jaded because they can pocket thousands in a day so they don’t like to sign for free. And I know a lot of people who do shows that WANT to meet fans, and love the interaction. I’ve seen it, I’ve experienced it. And that moment is what’s fun about a con and what I love about cons.

But hard work that’s a police officer, a technician, firemen, etc… I don’t think signing in the correct color qualifies.

Okay, I’m off my soapbox. Feel free to tell me how wrong I am.

On the way out of the Syfy party on Saturday night, a pretty horrible thing happened. I wasn’t going to talk about it in public, but I can’t stop thinking about it, and I think this needs to be said.

When I was a Teen Idol*, and I traveled to New York for publicity all the time, it was fairly common for a handful of super weird people to hang out all day in front of my hotel, or in the lobby of my hotel, so they could pounce on me whenever I tried to enter or leave, and demand as many autographs as they could. It was really creepy and awful, and I always hated it. It was more than a little scary. I mean, who in the world spends an entire day sitting in one place waiting for someone? Oh, I know: crazy people.

basically, if you camp out anywhere so you can shove a stack of 8x10s into my face when I’m trying to enter or leave a location, I’m not going to sign them, and I’m not going to be nice about it.

I refuse to reward or validate that kind of behavior, and I’m done being polite about it.

When we walked out of the SyFy party on Saturday night, a pack of people — probably 12 or 15, I’d guess — appeared out of nowhere, and surrounded me. They shoved pictures into my face, thrust pens at me, and made it so that I couldn’t even move. They separated me from my friends and my son, and, quite frankly, terrified me.

Let’s stop for a second and think about this: in what kind of world is it acceptable to surround a person you do not know, separate them from the people they are with, and essentially trap them? Maybe in crazy entitled psycho world, but not the world I live in.

I tried to scrawl my signature on a couple of things, just so some of those people would move and let me keep on walking, but whenever someone took something away, something new immediately took its place. Somehow, +Felicia Day saved me. She reached through the mob, grabbed my hand, and said, “Sorry, we have to go meet some of our friends,” before the literally pulled me away, to safety.

This is when the mob lost its shit. They yelled at me like I had done something wrong. They called me names, and they booed at me. (Seriously). A woman stormed up next to me and said, “If you don’t sign these things for me, I’m going to tell Twitter what an asshole you really are.”

I don’t respond well to threats like that. Though my instinct was to explode at her, I took a deep breath, looked her square in the eye, turned on my dad voice, and said, “Really? Are you serious? We’re done here.” I quickened my pace, and for the next two blocks she followed us, screaming and ranting and raving about how she’d waited there for hours, driven all the way from someplace far, and that I basically owed her as a result of her choice. I eventually tuned her out, and I guess she went back to the Syfy party to harass whoever else came out next.

The whole thing was really scary, made me feel like a sideshow freak, and made me really, really angry. I was just trying to walk out of a hotel and go meet up with my friends. I didn’t do anything wrong, and I’m not going to apologize forgetting upset about it.  This is important: I realize that just about anyone reading this on my blog isn’t one of Those Guys. Please don’t think the “you” here refers to, you know, you.

This is also important: When your motto is “don’t be a dick,” a certain kind of person is vigilantly looking for moments like this when you can be accused of violating your own motto, thereby proving to the entire world that you are, in fact, a giant lying pile of shit. I’m fairly certain that reasonable people can see who the dick was in this situation, and hopefully agree that it was not me. For everyone else: go fuck yourself.**

In Dancing Barefoot, I wrote about signing autographs at conventions:

Over the years, I’ve learned something from this experience: it’s never about the signature. It’s about that brief moment, that brief encounter with a Star Trek cast member, that is so important to the fans. That 30 seconds or so of hopefully undivided attention is what they’re really paying for, and I always do my best to make sure they get their money’s worth. Contrary to popular belief, sitting at a table signing hundreds of autographs for several hours without a break is hard. It’s not just mindlessly scrawling my name; It’s stopping and listening to the always excited, sometimes shaking, always sweating, sometimes scary dude who wants to know exactly why I did “X” on episode “Y” and would I please sign his picture in silver, because Marina signed it in gold and now he wants the men in silver and the women in gold, and I hated your character and here are 25 reasons why and I expect an answer for each one of them and I’m not leaving until I’m satisfied.

The crazy people who camp out don’t care about that brief moment, that brief encounter. The crazy people only care about taking a piece of $Celebrity.person and possibly selling it, or hording it, or … you know, I don’t even want to think about where that path leads.But that’s why they behave the way they do. It isn’t about our work, or about saying “thank you” or “high-five!” or anything about that. It’s about entitlement and being crazy, and I will not validate or condone that kind of behavior ever again.

I realize that a crazy person who thinks it’s entirely normal and not psycho to camp out in front of a hotel for hours and hours so they can trap a person isn’t going to understand why I will not validate that behavior, but I need to make this clear for the future: I’m a person. I am a  human being and if you cut me I will bleed. I’m happy to sign things and take pictures with people in appropriate situations, but if some dude violates my personal space or freaks me out, and then gets mad at me when I try to get away from him, I’m not going to do anything beyond telling that person to go fuck himself, and I’m not going to feel bad about it. To paraphrase Neil Gaiman, I am not your bitch.
Finally: In before the inevitable “you’re an actor and you chose this so you deserve what you get so suck it up because my life harder than yours because blah blah blah” comment (probably not here, but definitely at G+.)