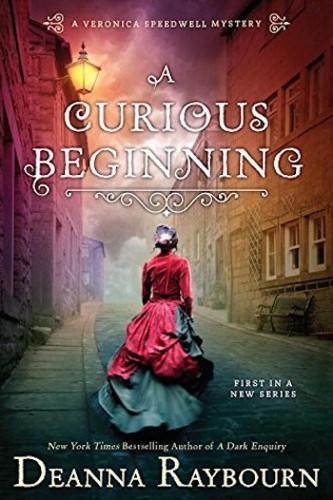 I didn’t know exactly what to expect from this novel but the description sounded intriguing. Set during Victorian London (yeah, yeah, yeah…I’m a sucker for Victorian Era reading) the novel follows Veronica Speedwell as she learns the truth about her heritage, which may just change the face of Europe and the world all together.

Veronica was raised by two ladies who took her in, since she’s an orphan. The last of them has just died and before she can set off for her next adventure in life, her house is broken into, she’s nearly kidnapped, and a mysteriously kind German Baron tells her he knew her mother and can shed some light onto her past. So, this stranger takes her to London, asks his friend – Stoker – to watch over her until he returns to reveal all. Then the Baron is killed, Stoker is blamed, they run off to join the circus, come back to London to discover the truth, find out secrets that can destroy the monarchy…and that’s just the first book. Phwew!

You can catch my thoughts on this book here:

1. Her ‘unconventional’ ways I found hard to swallow at times given the era. I’m all for ‘liberal’ women under that era’s constraints, but for some reason hers just seemed too out there under the circumstances. She had too much freedom, which sounds odd, but not for that time. Made the novel read too modern.
2. For such an amazingly smart woman – I mean she falls into that “Holmesian” vein of being able to figure things out at a glance – she can be incredibly stupid when it comes to her own safety and that drove me nuts. Why she could not accept that people were trying to kill her, or at least harm her, is beyond me.
3. Having said that, I do like her quirkiness. She’s a lepidopterist (studies butterflies) which is the most charming aspect of her character.
4. While there’s an undeniable chemistry between Veronica and Stoker, I like that they do not wind up falling into HEA with each other and the novel ends with them remaining friends without benefits and new business partners.
5. Why did we need the circus moments at all? I felt so much story/plot toward the mystery could’ve been written but instead we have to spend time in a carnival show that added nothing to the story in my opinion.

I would recommend the book for a fun/fast read and will probably pick up any sequels that may happen but my hope is that if we are setting Veronica up to be a female detective and Stoker as her companion in this, that the stories will be more cohesive. However, nothing was so bad that I had to put the book down and I finished it in one day, so obviously it was interesting enough to keep me going.

**I was given an eARC of this title for review by Penguin Group/Signet Romance through NetGalley!