There are cinematic greats, things that I call film, or you could say classics. Several films could be in this category, Ghandi, Citizen Kane, maybe even Titanic? Eh, maybe not.

However, one film this year would fit into that category. Not Birdman, Not Boyhood, Not American Sniper…

What could I be talking about? Hot Tub Time Machine 2. Yes, instant classic.

In all seriousness, I liked the first film a lot, the second, I’m not sure… No Jon Cusack. Eh…

Adam Scott is jumping in for Cusack. I arrived around 4-ish and there were about six people waiting. Doh. Scotty soon joined me and the barricade slowly filled up. When I say filled up… I mean the front row was one row deep for a couple barricades. LOL. Time started ticking by and finally the arrivals happened. People arrived but no one knew who they were. Okay, well besides the 100 things I have for Chevy Chase I got a Hot Tub Time Machine 2 mini poster, a Parks and Rec mini poster that Chris Pratt already signed and my Party Down mini poster as well.

The first to arrive was Clark Duke. He was super cool. Running over to sign. I got him on my mini poster. I should have printed a Greek cast photo or something. I loved that show! Then Rob Corddry arrived. He waved and said, “I might do it later.” I was like, Rob come on. Really? Really!?!? Then he ran over and signed for the few of us in the front and then bolted. Maybe 17 seconds at most.

Adam Scott then showed up and while he wasn’t super personable he came over and signed for the whole barricade. He wouldn’t switch to gold for the Parks and Rec poster that Scotty helped me with, and his autograph was… not the best, lol. But he was nice to sign and out of all the guys, he did the most. He also signed my Party Down and HTTM2 poster. Then Holy Crap… It’s Chris Pratt. He arrived and took a couple selfies and then bolted. I heard that someone yelled at him and told him that he made them drop their camera or something, but I dunno. How can you yell at Chris Pratt? Finally Craig Robinson showed up and he’s cool as hell. He signed up and down the line and was really awesome. And then we spotted Jim O’Heir from Parks and Rec! It’s Jerry! The nicest guy ever. He took photos down the line, signed my poster which he was impressed with it.

Then I got a quick photo with him as well.

So, all in all even without Chevy, it turned out okay…. For me at least. 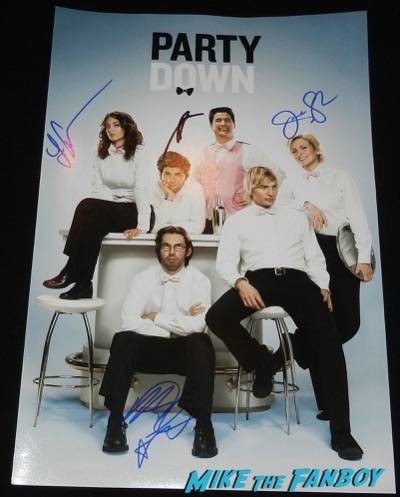