Raven is back with more of the top 31 horror movies for All Hallows Eve! The project was to watch 31 horror films leading up to Halloween! 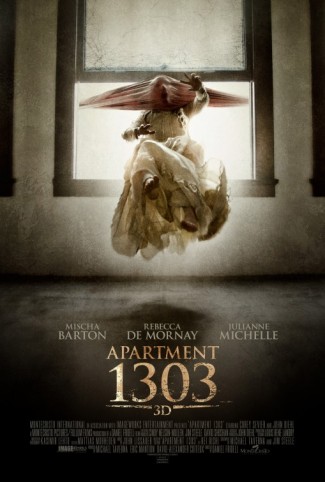 Attack on the Blondes

I read about Apartment 1303 after doing some digging on a pretty terrible Netflix horror movie that I watched a few months ago.  The reviews sounded pretty bad, but I was intrigued enough to take a go at it anyway.The 2012 version, that I watched, is yet another remake of a japanese horror movie by the same name.  It centers around an alcoholic and abusive mother (blond) and her two daughters, one of whom moves into a new apartment.  After experiencing a bit of paranoia and a few genuinely spooky incidents, the younger sister (very blond) , is thrown over the balcony to her death by the ghost.  The police want to rule it as suicide, but the older sister, Lara doesn’t believe it to be the case.  She decides to move into the apartment, despite her sister’s death.  The apartment’s ghost and the ghost of her sister manifest themselves to her on multiple occasions.  On top of that all of the other residents of the apartment building try to get her to move out.  Despite all of it, Lara (also blond) decides to stay and try to not become the apartment’s newest victim.  Bet everyone can guess how well that turned out…

Unfortunately this version took everything that would set it apart from every other haunted house or ghost-with-a-grudge movie and minimized it until it was barely a plot point at all.  Not only that, but every character was so under developed that you really didn’t care if any of them died.  In fact, the only decently developed character was the little sister’s boyfriend who also turned out to be an undercover cop (also the only brunette).  Honestly, I didn’t even really care when the ghost tried to send him off the balcony as well.

My biggest problem with this movie is the lack of consistency or explanation.  I knew a little of what the plot was supposed to be, going in, so it was a little easier for me to understand.  However, the creepy next-door neighbor girl’s occasionally cryptic comments about the original ghosts of the apartment did not leave enough evidence to explain their backstory nor why they were attacking new inhabitants.  Also the ghostly force broke form when it attacked the boyfriend when previously it had only gone after 20-somethings women.

Maybe they didn’t like the brunette presence and decided to retaliate.
This film’s one high point was the ghost placement in jump scare moments.  There were a few nicely placed moments, although they were quickly spoiled by the convoluted nature of the plot.  Also I like that they went for practical effects on the ghosts’ makeup.  I think bad CGI might have actually made me turn the movie off.

All in all, not that scary.  I give it one spook. 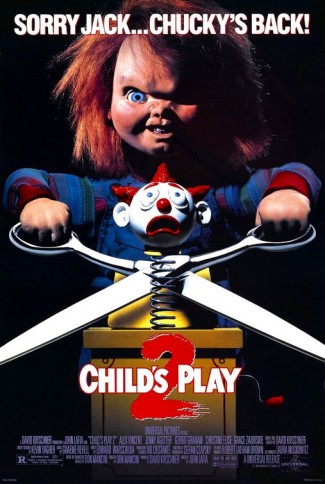 October 1st was such a glorious occurrence that I couldn’t sleep. LITERALLY.  So at 4:15am PST I decided to kick off October with something slightly ridiculous, and not at all on my list:  Child’s Play 2: Chucky’s Back.

Set two years after the first film leaves off, Child’s Play 2 opens with Andy Barclay in foster care and his mother in a mental institution.  The company that created Chucky’s doll is trying to reign in the bad publicity from the first set of murders by recreating the doll that all the fuss was about.  Surprise, surprise!  People start dying again.  From teachers being beaten to death with meter sticks to death my heavy duty machinery, this film is no less ridiculous in its murder methods than the first one.

While this film is not very scary, it is certainly has some fun moments.  Some of my favorites include the executive being held up in his car with a squirt gun, the asshole foster father being killed by Chucky, and the glass-eye replacement of the factory security guard.  Yes, my favorite moments happen to be “gruesome” deaths of characters who’s greatest flaw was not believing that a doll could commit horrendous murders, but in the world of horror that is, indeed, a sin punishable by death.  I swear I don’t just like them for the hilarity… >.>

Like many horror movies from this era, though, Child’s Play 2 has a rather large sin counter, as well.  Even with the theory running a little on the fantastical side, when deaths begin to be associated with the same kid as the toy that you’re trying to quash the bad press about, you’d think they’d take a second look at the Good Guy Doll with the knife.  Either that or maybe take the kid, himself, in for questioning.

That just seemed to be the symptom of the much larger problem that many movies with a child protagonist seem to suffer from – a severe lack of adult intelligence or empathy.  Even if you don’t believe a doll went on a killer rampage at this kid’s last house, it seems a little on the insensitive side that these new foster parents make him keep an exact replica of the very doll that haunts his nightmares.  How much of this film could have been prevented by tossing the Good Guy doll before Andy ever stepped foot in the house?  That way Chucky would not have had an innocent doll to pose as before going on his murder spree throughout the house.

However, my largest issue with this film as a whole lies with how easily humans die vs how hard it is to kill Chucky.  I get that he’s the big-bad that our protagonist needs to surmount (again), but if a two-foot tall doll can beat a grown woman to death with a meter stick, then Andy should be able to kill Chucky when he puts him in the doll oven and he comes out a charred pile of doll-parts. 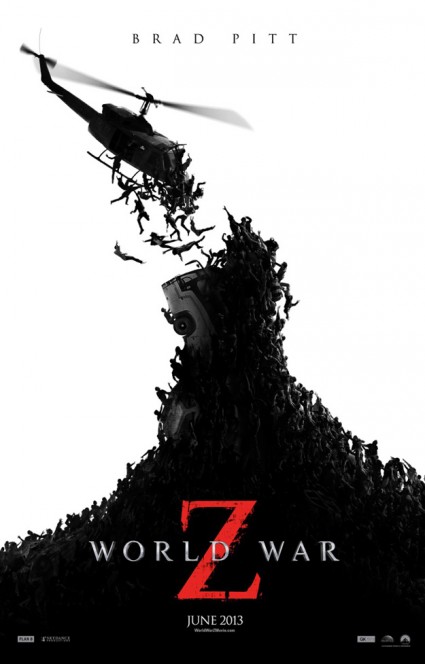 The Book Was Better

World War Z is very loosely based off of the book by the same name by Max Brooks.   The film follows Brad Pitt as Gerry Lane, a UN employee who is recruited to try to discover the origin of the zombie outbreak.  The films sets up in Pittsburg, PA as Lane, his wife, and two daughters get prepared to take a trip.  They never do quite make it wherever they were planning on going, as the road which started as a traffic jam, gets overrun with zombies.  The family makes it to New Jersey where they hole up for the night in an apartment building after their RV is stolen.  Meanwhile Lane has been in contact with a UN buddy of his who promises his family protection in exchange for Lane’s help on a mission.  Lane and family get rescued from the apartment complex just in time by his contact, and, after seeing to his family’s safety aboard the military ship, Lane takes off with a team to a South Korean base where it is rumored that the infection started from.

After the base turns out to be a dead end (and the doctor in the group shoots himself in the face) the two survivors of the original team head to Israel, where a wall was been built before the outbreak that keeps out the undead.  After an extremely stupid move by the populace, the zombies climb over the wall causing Lane and his new Israeli friends to flee onto a commercial airline that they re-direct to a WHO facility in Wales.  Not to be a-typical of a zombie film, there is a stowaway zombie that attacks passengers and causes the flight to crash.  Miraculously the sole survivors of the plane crash, Lane and his companion, Segen, manage to make it to the WHO facility.  They discover a few scientists who have managed to hole up in one wing while the zombies have taken over the rest of the building.  To not spoil the ending, Lane manages to save the world in a matter of days since the outbreak.  Go Brad Pitt.

For anyone who hasn’t read the book, World War Z was probably just a mediocre zombie movie that was much more action than suspense based.  For those of us who have read the book, we’re left wondering when director, Mike Forester decided to scrap the interlocking-short-story style for a linear version.  One of the best parts of the book is the almost analytical style in which it presents the “zombie war”.  While this element certainly sets the book apart from others in its genre, the same detachment from events doesn’t work as well on screen.  However, Forester could have easily gone for a Love Actually-style of storytelling and keep the core vision of the book of multiple perspectives on the event, rather than trying to incorporate multiple peoples’ experiences into one character.
My only major issues with this movie comes from having read the book.  While the book takes you to some really creepy settings, like the french catacombs and the dark recesses of the ocean, the film’s locations stay pretty above-ground, in both geography, and in trope-dom.  The film doesn’t explore any of the creeptastic or unique locations that have never been seen on screen before.  Instead it re-uses ones that have come before.  It goes to an infested apartment building (28 Days Later), an city that thinks it’s safe, only to find out it isn’t (Woodbury – The Walking Dead S3), a plane (Quarantine 2), and a research lab (Resident Evil).  Also the movie never touches on the two most terrifying aspects of World War Z, that zombies, frozen in winter, re-animate in the spring to attack in new hoards, and the underwater zombies that either crawl in from bodies of water into camps of unsuspecting victims, or pull people in that get too close.

There was also a tad bit more than slight issue with the timeline.  From start to finish, World War Z (the movie) takes no more than six days.  That includes the initial panic, facilities being over-run, and Brad Pitt saving the day.  Most other zombie apocalypse flicks have a more believable timeline of months to years between initial panic and infection to the solution being found and the world being saved.

That being said, I really liked that Forester was able to inject the underlying tension that is the lifeblood of a good zombie movie into most of the scenes.  While the audience knew that Brad Pitt was too pretty to die, there was always a chance that one of his less-pretty companions might get the axe (or the bite, in this case).

While not the scariest zombie movie I’ve seen in recent years, it did manage to have the underlying tension that is integral to a good zombie movie.  I give this action attempt at a zombie flick 3 spooks.