Hatchet 3! Who knew right! Man, I feel like this is debate weekend here at MTF.

Needless to say, the awesome Ace headed over to the premiere and met a much of horror icons including Zach Galligan from Gremlins. I should have gone. Ah well…

I’m not going to babble. Check out Ace’s recap below!

What’s up autograph fanatics! Ace here with a partial recap of the HATCHET lll premiere! As you all know, I went to the True Blood premiere and did fairly well…  After I left True Blood, I went for the exits of Hatchet lll. I did amazing considering I didn’t get anyone on the way in!

Moz, Mr. C, Alex, and I ran to the car as fast as we could… We were meeting up with DVD Dave and we thought maybe we could get them in the lobby before they entered the event… We had just missed them in the lobby… Luckily, it worked out for the better because the event coordinator allowed us to have some official movie posters…

The set up was very fan friendly so we basically just walked into the premiere… Jokes fly as time passes. After asking several people, and several attempts later, the event coordinator revealed the left over Hatchet posters were in a box. Unfortunately, since there are so many people walking around, everyone thinks you are stealing a poster they give out for free…Regardless; it was worth the unneeded attention because the posters are amazing.

The film finished within an hour, and I will save the spoilers because I want you to go watch the movie. There was a brief intermission where you saw all the invited guests rush to the restroom and concession stands. Then, after ten minutes or so, a Q & A commenced. It was probably the best Q & A I have ever seen… It was long, but everyone had a chance to speak as the moderator asked questions down the line…

After the Q & A, we walked up carefully to the platform to ask for their autographs…

Zach Galligan was the first person I approached. I have never seen Zach do an event in Los Angeles so I needed to add his signature on my Gremlins pieces. He was so cool. Just a class act! 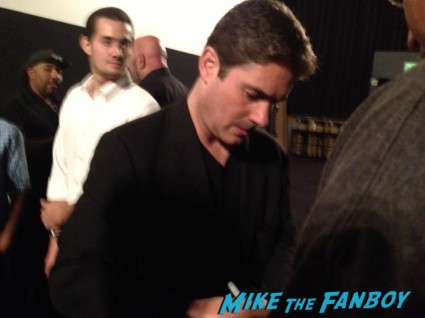 It just makes the films even more iconic as he was so cool about signing. I am pretty sure everyone has seen Gremlins, and could understand that. I got his signature a couple more times throughout the night as well as a picture. 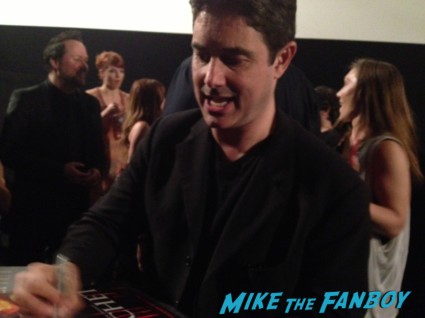 I also added him to a few Hatchet pieces. I regret not bringing my Gizmo action figures, but I am sure Zach will be back eventually. In the meantime, I will get Joe Dante on them. 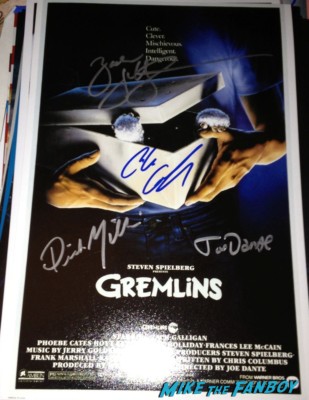 Danielle Harris was the second person we approached… Now, I was so excited to finally get her on my Halloween 4 poster… By the time she signed it, I just wish I handed her the money at a convention to get it signed. She gave me an abbreviated signature along with the others, but mine looked really bad… Leave it to your imagination. She might have not been feeling well, or thought all the fans were dealers… who knows… regardless she is a horror icon… 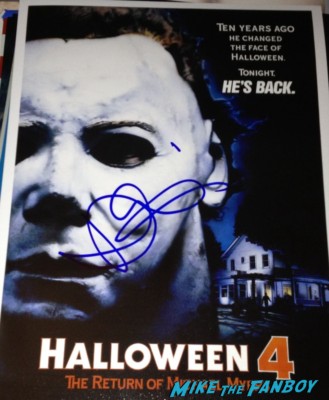 I will add that most of these people do conventions and charge for their autographs across the world… When you ask for autographs for free in person, you either get a shortened graph like Danielle or a flat out NO from Bill Moseley, or you get some that don’t care and just love the fan interaction…

Derek Mears was a class act! We approached him and he was the coolest person you would ever meet. He talked to us, signed whatever we had and talked up a storm with us. I only wish I would have brought my Jason Mask and poster. It was awesome to meet such a cool star such as he in the horror industry. 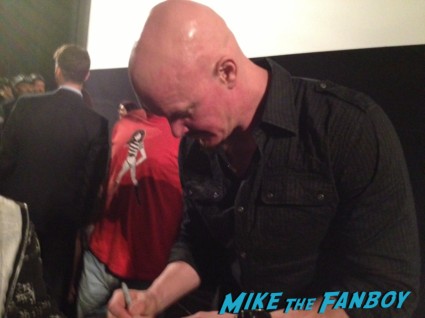 BJ McDonnell signed and signed away. Gladly added him to my hatchet poster. If we couldn’t get Adam Green to sign it, then surely he was definitely the next best addition. He thanked us many times for coming out to support the film.

Sid Haig was definitely a winner that night… You saw a different side to Sid. Usually during his conventions, there isn’t much interaction. It is more of a business transaction when going to a convention. If you have read the Days of the Dead article, I was really disappointed in meeting the horror icon… Instead, he revived himself and signed whatever you had. Talked to us as much as he could… and signed a lot more than Bill Moseley that night, so he is a star in my book.

Jason Trost was pretty cool! Signed whatever you had and made a great addition to the Hatchet collection.

Kane Hodder was another class act! My brother and I have watched his work for a very long time. If you have ever seen Celebrity Ghost Hunters, he is one of the investigators. I just wish they would do it more often. He is always one of the best in person… Once again, I wish I had my Jason mask. He is among the best that have played Jason. It only makes it better that he is good to his fans. He signed whatever I had, and it just made us like him even more. 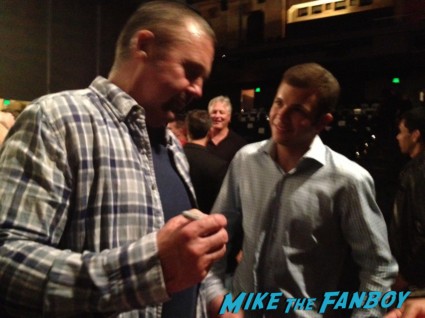 Caroline Williams was a spitfire! She was ultimately just a doll! Signed whatever we had and still stuck around although her ride showed up. 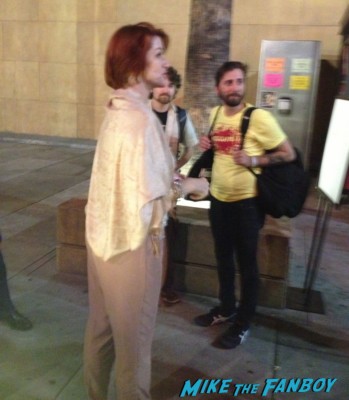 Regardless, this in addition to the event before just made an awesome night. Always cool to have an amazing day in Hollywood.
That is it for today! Hope you guys enjoyed! 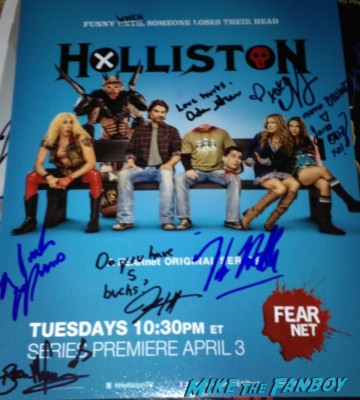 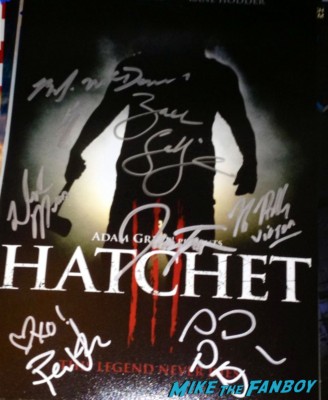