Home / Ace • Fanboying! • Horror • Stars of the 1980's and 1990's / Ace Goes Bowling For Boobies At Dark Delicacies And Checks Out The Killer Klowns From Outerspace! Autographs! Klowns! Craziness!

I’ll tell you, I think Ace should have a Dark Delicacies fan page! He is clearly their biggest fan ever! This time he’s writing in about a couple different events that they have done. The first is… Ahem… The Bowling For Boobies Signing and the second event is the Killer Klowns From Outerspace DVD signing.

I think it’s awesome that Dark Delicacies takes to time to do signings for smaller cult movies. I mean seriously, when do you have the opportunity to meet the Chiodo brothers?

Anyway, check out Ace’s report after the jump!

What’s up autograph addicts?! I am going to do a Dark Del Fusion of events. I am going to be completely honest. I love this place. Maybe… You could tell? It seems like that’s all I do. I will say…it is the easiest place to get the small but vital actors/directors in a variety of horror films. I love starting a new horror movie mini-poster! It is truly empowering! I know it isn’t the greatest event to show you, but it’s a small addition to the Fanboy Madness!

The first event would be the Bowling for Boobies Charity 8 x 10 event.

Now… I must say…I was debating on whether or not to attend the event. A friend of mine really liked the horror actresses, but I was not really going to get any “extras”. I figured, what the hay… It is a charity event. I was absolutely dreading attending an event filled with beautiful women. O, Woe is me! What was I to do? O, Woe is me! 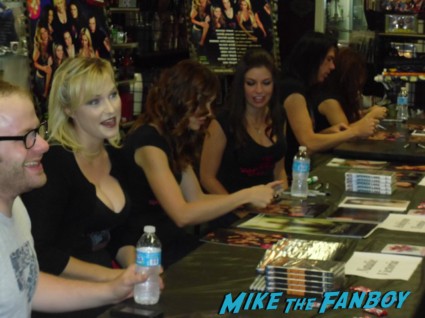 Cerina Vincent signed the photo prior to the event… Off to a great start! All the girls were lovely. It was an honor to meet them all. I was super excited to meet Ashyln Yennie! If you have seen the Human Centipede, you would know why…

The Second event was the Killer Klowns from Outerspace DVD signing. I must say, it is a childhood piece. I watched this film when I was five! It brought back some tremendous memories! The Chiodo brothers have done many special effects in many different films… They are most notably credited with the design of Critters!

1:50- Picked up my Killer Klowns DVD! I really love the look of DVD sleeves signed… Not as much as mini-posters… Mostly because, who the hell wants to become DVD Dave? Just joshing….

1:59- Stephen Chiodo is the first to show! Director of Killer Klowns!

2:05- Edward Chiodo shows up next! Brings the crazy popcorn! I believe he brought the prop gun from the film! Just a crazy flashback to my childhood! 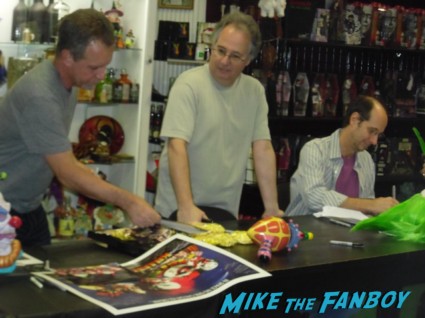 2:15- Charles Chiodo shows up last! KLOWNZILLA… I was super excited to meet him… Within this time, they reveal plans for the return of Killer Klowns… They also reveal secrets about their copyright battles for some of the nicknames of the clowns.

I had 5 movie posters with me: Critters, Critters 2, and, Killer Klowns from Outerspace. I handed Stephen Critters 2 first… Mick and Cynthia Garris already signed it… 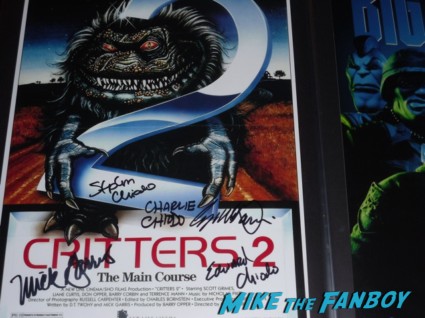 Unfortunately, I got this vibe to not push it but I gave him the Killer Klown mini-poster. 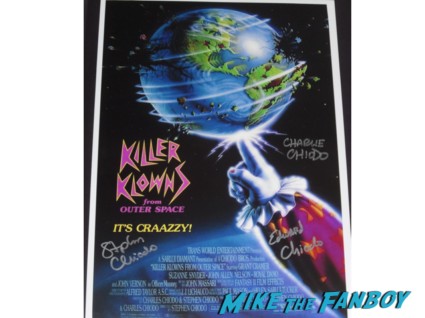 Then I really felt it… So, I would not dare hand them Critters…. Overall, I was happy… Two Mini-Posters and a DVD. 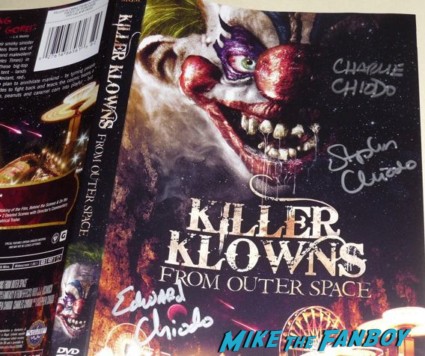