JM is back with another great review, this time American Horror Story: The Complete Second Season. The anthology series is back with some members of the cast returning and everyone playing a new role. I love that aspect of the series, having the same ensemble playing different parts. More shows should do that. It allows the creators to craft singular stories with a beginning middle and end.

Ryan Murphy masterfully assembles another awesome edition for his horror anthology, “American Horror Story: Asylum” and fans will be clamoring for more after checking out the home video release fort season two. Once again, Ryan Murphy demonstrates an impressive insight in delivering a spectacular second series for his highly acclaimed hit TV show. “American Horror Story: Asylum” is a unique, unrelenting modern day masterpiece and a prime example how to make a great “mini-series.” 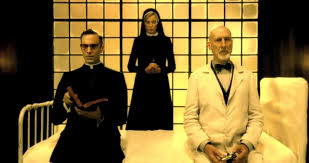 Possessing a nostalgic throwback to classic filmmakers, Ryan Murphy continues casting and expanding an impressive stable of dependable actors lead by Emmy and Academy Award winner Jessica Lange. Along with Zachary Quinto, James Cromwell (who won an Emmy for his performance), Sarah Paulson, and Joseph Fiennes, Lange headlines a captivating, yet creepy cast in this provocative breathtaking series. This critically acclaimed series received an astonishing 17 Emmy nominations, more than any other show and proves that there is nothing wrong with making some scary entertainment. 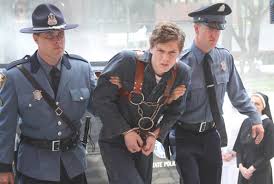 “Asylum” takes places at the Briarcliff Mental Institution and intersplices the story of patients, doctors and nuns with various events from the past and present. Sister Jude (Lange) and Sister Mary Eunice (Lily Rabe) maintain the Massachusetts to help house and cure the criminally insane. Trying to help cure these unfortunate souls are psychiatrist Dr. Oliver Thredson (Zachary Quinto) and scientist Dr. Arthur Arden (James Cromwell), but many of the patients believe they’re unfairly institutionalized including a lesbian journalist, an accused serial killer and alleged murderer. 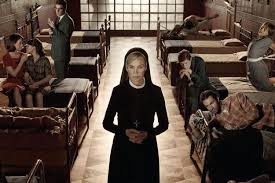 This detailed-oriented and disturbing incarnation of “American Horror Story” is a wonderful piece of TV that will leave you with plenty of chills. The creative staff behind the series deserves a ton of credit for continuing an impressive, no holds bar approach with a wonderful horror anthology that leaves fans demanding more episodes. The idea of utilizing the same cast over and over again with a new storyline each year is a fantastic treat for fans. Not only does the series haunt our dreams, but the anticipation for each subsequent series/season consumes us. Great shows makes that happen and the creative team behind this amazing and awesome show deserves a lot of credit. 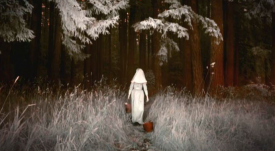 Even the special features included on this Blu-ray and DVD release are well worth watching after finishing these 13 blood-curdling episodes. Seeing so many deleted scenes and featurettes included on a great show like this is why owning a TV show is worth it. Once again, Fox delivers the goods on a terrific home video market release and I strongly suggest you pick up your copy ASAP!

American Horror Story: The Complete Second Season is out now on blu-ray! 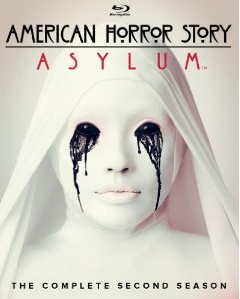