Every King has their preferred place of contemplation. Ragnar ponders about life and death while taking a hot bath. It seems like he has moved pass the glances and graduated into having an actual conversation with Yidu, the new servant girl. They find common ground in regards to death; killing themselves or everyone around them. Yikes! Aslaug notices Ragnar’s interest in Yidu and offers him time alone with her. Wow, either she is still feeling guilty about Harbard or she really doesn’t care anymore. Ragnar continues to punish Aslaug for her one indiscretion, but meanwhile freely enjoys other women’s company; double standards much? 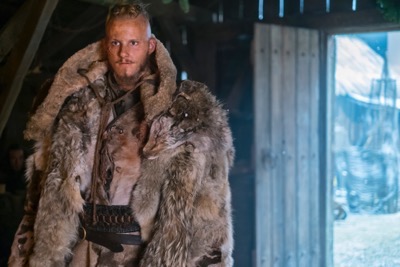 After Queen Kwenthrith’s rescue, trouble starts to brew again in Wessex. Wessex and North Umbrian armies need to come together to regain control over Mercia. However, King Aelle isn’t pleased about Magnus becoming the heir to the Kingdom of Mercia; Magnus being the bastard son of his archenemy, Ragnar Lothbrok. A Northman having birth rights to English lands is probably extremely hard to digest. Threats against Queen Kwenthrith continue to build, but I’m sure Aethelwulf will come to her aid. To further his anger and disgust, King Aelle notices the “friendliness” between Judith and King Ecbert. He confronts her daughter, but Judith snaps back claiming that she is not any man’s property, but a free woman able to make her own choices.

Yol celebrations are on full motion back in Kattegat. It’s great to see Helga and Floki back at the village, but they are still alienated by the villagers. Ragnar hates seeing Ivar getting babied by Aslaug. He believes she is enabling him, but Ragnar’s attempt to make Ivar part of the celebration with the rest of the boys backfires on him. We might have mixed feeling about Aslaug, but when it comes to kids, she is the best. She takes all the “unwanted” under her protection. 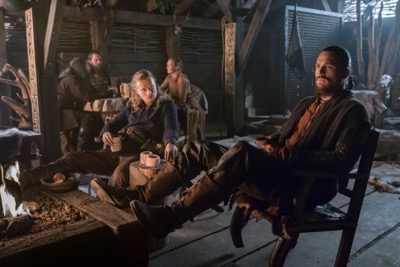 Aslaug takes Ivar to Floki and Helga. She Asks Floki to teach Ivar the ways of a true Viking, the true Gods and to despise the Christian Gods. With the passing of their own daughter, it’ll be nice to have another child around them. However, Ivar might come as a mixed blessing since Ragnar is in the shadows about the new arrangement. Maybe that’s the reason behind Queen Aslaug’s blessing towards Yidu and Ragnar; a mere distraction to keep him in the dark. Aslaug believes Ivar to be her son and hers alone. 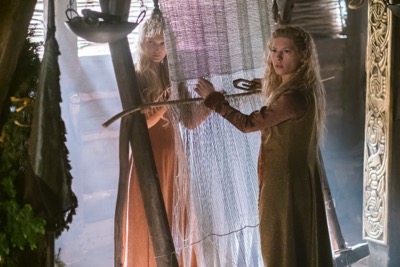 OMG! I never thought I’d see the day. Floki finally goes to the Seer after hitting rock bottom. He must be so desperate and confused. Is he starting to question his connection to the Gods? Floki walks in drowned with uncertainty, but the vibe instantly changes with the Seer’s unexpected reaction; “So you finally came. I waited a long time.” At first Floki was baffled, but things take turn once the Seer asks him to “show me who you are”; instead of licking the Seer’s hand, Floki presents his to be licked by the Seer. What??? Is Floki the new Seer??? OMG!!! The infamous laugh says it all; Floki is back people!!! He knows who he is now more than ever.

Back in France, Princess Gisla and Rollo are in the middle of getting their marriage annulled. Just when everyone assumed Rollo was standing there without any knowledge of what’s going on, Rollo speaks up surprising them all. Princess Gisla is shocked and quite impressed by his commitment to the marriage. She asks everyone to leave the room giving her and Rollo the privacy to finally talk; now that the gap has been bridged. Still not completely convinced by his intentions, Princess Gisla interrogates him further and Rollo of course passes her test with flying colors. Rollo renounced his loyalties to the Vikings absolutely the moment he took off the arm band given to him by Ragnar. Let’s just say that it totally paid off; Rollo and Princess Gisla are officially married now.

Speaking of bedroom antics, Ragnar is having his own fun with Yidu. He sure loves his foreign toys. Yes, he is such a manwhore, but his curiosity trumps all other desires. Ragnar’s thirst for knowledge always keeps him on the hunt. He enjoys his talks with Yidu; the very talks that lead him to believe that she is more than just a slave. Her past is a mystery Ragnar wishes to uncover. Now that he is well aware of Europe, it’s time to move further down to Asia. Ragnar invites her claiming, “I want to show you something.” Yidu is beyond terrified sensing she might not be interested in what he has to show. 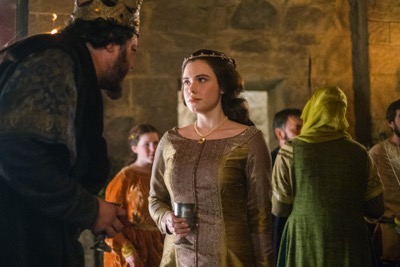 Ragnar takes Yidu into his secret man cave and grants her access to come and go as she pleases. Confused by his offer, she questions him; Ragnar frees her of her slave duties. And just like that Yidu is a free woman once again. It’s nice to have King Ragnar on your side. Yidu offers a Chinese remedy for Ragnar’s unseen sicknesses. Yup, you guessed it right; they get high as kites. Magic mushrooms are so last season. Ragnar just found his new best friend.

Feeling like a champ after taking down the big bear, Bjorn not only added on to his scars, but also to his body art. You know he is Ragnar’s son the moment he started to understand a map he stole from France. Even though it looked insignificant, he knew it was something of considerable value. This might be his means of extending his raids to lands beyond France.

Bjorn makes his journey back to Kattegat, but his travels turn much more challenging when he comes across an unwelcomed guest. The massive berserker hired by Kalf and Erlendur attacks Bjorn and for a man of his girth, his vanishing skills are pretty impressive. Nevertheless, he is no match for Bjorn Ironside. He outsmarts the berserker by beating him at his own vanishing game. Bjorn finds King Horik’s ring and tries to find out who sent the hitman. With no success in getting a word out of him, Bjorn guts him like a fish. Ouch! Who else clenched? 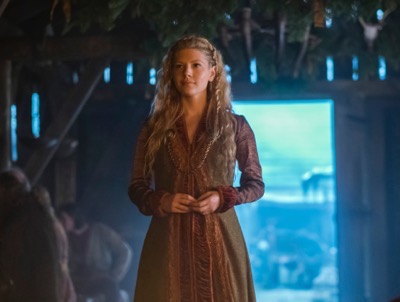 Instead of going to Kattegat, Bjorn heads straight to Hedeby. He makes his grand entrance making Kalf and Erlendur pale from the sight of him. I guess he has a good idea about who is behind the assassination attempt. Even though Bjorn doesn’t confront them in front of Lagertha, he takes his revenge through Torvi. Bjorn asks her to come with him leaving Erlendur behind. Unfortunately, Erlendur wouldn’t release her of her marriage vows unless she leaves their child behind. Torvi breakdown torn between the decisions. Lagertha comes to her rescue by promising her to take care of her child and encourages Torvi to follow her heart. This is just a small preview of what’s in store for Erlendur. He hasn’t seen the last of Bjorn Ironside. Watch out little dude, you have no idea what you’ve stirred.

On a much happier note, we are taken back to France with yet another feast inside the castle walls. The formal dinner gets quickly interrupted by Princess Gisla, requesting her husband for a moment alone. Is it me, or is she glowing? I doubt we’ve ever seen her so light and happy. Rollo is already winning at his duties as a husband. Princess Gisla has finally found her match. She runs away with him into the kitchen and pounces on him like a hungry cat. The princess couldn’t have gotten into his pants any quicker. Princess Gisla and Rollo added their own tunes to the dinner music. They were so loud that even the stone walls in the huge castle failed to hide their mourns. She is totally smitten by Rollo; but seriously, who wouldn’t? 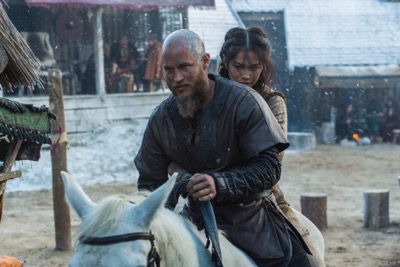 Yidu has really made quite an impression on Ragnar. At the Yol celebration, you’ll notice how Ragnar’s face paint is influenced by Chinese art. It closely resembled face pain done by Chinese dancers. The following day, Kattegat gets a visit from another Viking King. He already smells like trouble. King Finehair introduces himself to Queen Aslaug and she welcomes them all to Kattegat. The stories of Ragnar’s ventures into England and France have reached every corner and King Finehair has come to finally meet the famous warrior King. Aslaug is not so gullible. Not convinced by his answers, she continues to push King Finehair to find out his hidden agenda. Apparently he is on a quest to win a girl’s heart by being the one sole King of Norway. Good Luck with that buddy.

Bjorn returns to Kattegat right in the midst of the welcoming feast. Ragnar is always late to the party. He walks in not too thrilled to see a stranger in his spot with his children. After many silent stares, Ragnar finally breaks the silence; “And you are?” Smooth Ragnar, very smooth. I’m sure he won’t simply “step aside”. I’m excited to see the showdown next week. Now that Bjorn is back stronger than ever, Ragnar is cured of all his sicknesses, and Floki finding his way back to the Gods, the team is back together. Of course we miss Rollo, but he is making some epic waves at French court himself. I can’t wait!!!