Nowadays naming brands after yourself seems so commonplace. Regardless of the level of celebrity or name recognition, everything exudes narcissism with wild products probably too trendy to succeed and will usually fade into obscurity. On the really rare occasion, could an unsuccessful product permeate through time and actually become a pop culture icon itself? The documentary “Framing John DeLorean” makes its case with the DeLorean’s legacy.

“Framing John DeLorean” persists as a beautiful blend of documentary and reenactments to create an exhilarating, entertaining and enriching piece of cinema. Almost acting as the perfect personification of Icarus soaring too close to the sun, the incredulous insight with the scandalous saga of John DeLorean’s dream car needs to be witnessed. DeLorean’s determination shifts swiftly from essentially creating the muscle car demand with the Pontiac GTO at General Motors and becomes the “IT” auto magnate maverick recognizing demands before trends take place. 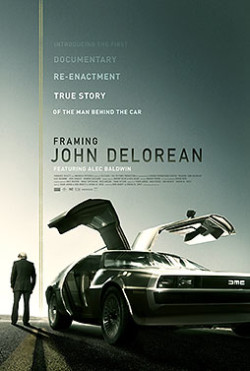 DeLorean’s remarkable rise through the ranks at GM made him a name in the auto industry, but thanks to a dubious drug bust and the heinous hatred conducted made him infamous before “Back To The Future” resurrected his name. The film focuses primarily on his career-defining moments and has re-enactments spliced throughout to create an unique yet ubiquitous feeling.

“Framing John DeLorean” drives back n’ forth focusing on the car-crazy decade dominated by bold risks to his ultimate downfall. Dominating the auto industry his flashiness flustered contemporaries, but consumers couldn’t get enough so naturally creating a new car company and a flashy, futuristic stainless-steel coupe seemed like a logical idea for DeLorean.

Shifting swiftly from scripted segments to tenacious, fascinating and fresh interviews creates a blistering biopic about the infamous carmaker. Over the past three decades, dozens of unproduced scripts seem to disappear and no one could capture the DeLorean story until now. John DeLorean’s heyday had Hollywood clamoring for a fantastic film so it’s completely mesmerizing there hadn’t been a film until now. 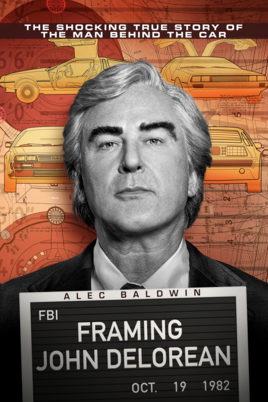 Considering his legendary, larger than life personality I’m still stunned nothing came into fruition. The simply, stellar cast of Alec Baldwin (John DeLorean), Josh Charles (Bill Collins) and Morena Baccarin (Christina Ferrare) should suffice for a film of it’s own, but feels more of an interruption with their re-enactments disrupting interesting interviews. These intriguing, individual segments would work on their own accord instead of detailed distractions. Luckily, they only account for a small portion of the film. However, they’re impactful with Alec Baldwin’s meta moments making for fascinating commentaries and raise poignant questions about DeLorean’s legacy.

“Back To The Future” certainly cemented DeLorean’s name into the history books and new generations of fans will seek him out for the rest of eternity. Although disgraced, DeLorean dedicated the remainder of his life trying to recapture his former glory. The entertaining entrepreneur’s rise and fall with “Framing John DeLorean” delivers a delightful documentary and feverously stays with you long afterwards. Much like their ambitious subject, directors Don Argott and Sheena M. Joyce joyfully fly too close to the sun, but receptively right the course just in time. Baldwin’s megalomaniac manifestation of DeLorean demonstrates his dedication to risk it all and accept the consequences of his actions despite hurting everyone around him.

Viewers will eat and enjoy every moment of this fascinating, fun documentary. Whether you’re a huge fan of “Back To The Future,” remember the infamous drug bust or none of the above, “Framing John DeLorean” definitely resonates and reels you in with every frame. Just remember where we’re going there are no roads and the sky is the limit.