The final Paleyfest panel of the year was American Horror Story: Coven. The AHS fanbase is huge and I think this year it’s grown even bigger. This season seemed to be bigger and better than ever.

At Paleyfest many of the cast showed up included Emma Roberts, Evan Peters, Kathy Bates, Angela Bassett, Denis O’Hare and more! Chloe was able to attend the event and even asked a question!

The other night, I got to see the cast and crew of my favorite show up close and personal. It was none other than American Horror Story, and let me say that it was one of the most amazing nights of my life. I’m writing this review now, and I’m still in complete disbelief of what happened.

When I arrived at the Dolby Theater, there was a short line of people there (this was about two hours before the event). My sister and I waited for about twenty minutes before we were let in, so we waited patiently and counted how many Tom Cruise lookalikes passed by. On the inside, there were several booths selling programs and DVD’s from previous Paleyfests. The programs were $8 each, which to me seemed a little bit expensive considering the fact they used to be given away for free! Finally, we all gathered around a railing where we could catch glimpses of the cast walking into the “red carpet”. We spotted Jamie Brewer and Emma Roberts before security asked us all to take our seats. 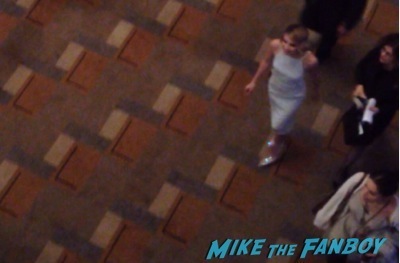 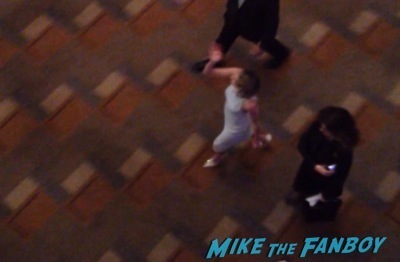 I was lucky enough to have snagged a seat in the 5th row, and had a pretty good view. I quickly made friends with the people sitting next to me, who had gone to all the other Paleyfest panels this year. After gushing to them about my love for Evan Peters (and the knitted bear hat I brought to give him) and Emma Roberts, we met the moderator, who proceeded to show us “Burn Witch Burn”, an episode of Coven. After that was over, he brought out the cast members! They all looked stunning, and Angela Bassett entered the stage holding Kathy Bate’s character’s head on a silver platter! It was a truly wonderful fandom moment. 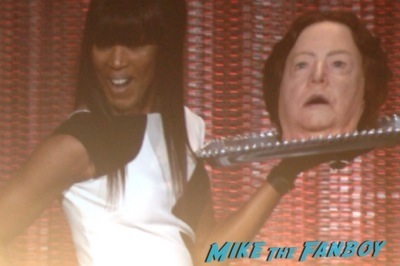 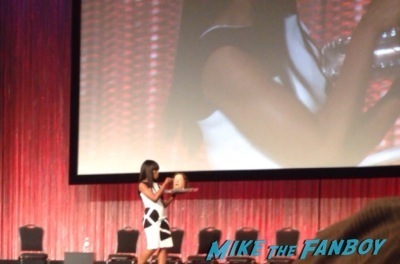 The moderator was funny (although a little rude at times), and got the cast talking about some hilarious stuff! Kathy Bates and Gabourey Sidibe joked about their characters in Coven having a spinoff called “Queenie and The Head”, and the hilarious Sarah Paulson sipped away at her drink while telling stories of Jessica Lange, who she said is a huge Klepto. Kathy Bates said she met the president (and prayed that he hadn’t seen the show!), and Gabi and Sarah told us about the bar fight they got into. No moment went by where you couldn’t see the amazing chemistry between all the cast members. Also. A new cast member, Michael Chiklis, was announced to be joining the show! 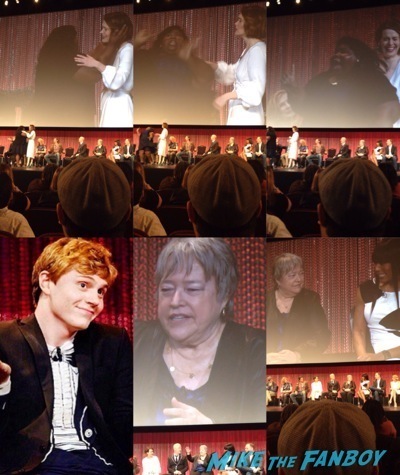 The most fun part of the night was the fan Q&A. There were a ton of fan interactions! You could really see how ardent and passionate the fanbase is. First off a woman asked if she could have a job, which was, well, awkward. The cast laughed it off. Next, a group of fans who had come from Mexico told Sarah that she had tweeted them, and they printed it on a shirt. Sarah called them up to the front, signed their shirt, and gave them all a hug! After that, two girls confessed how much they love Sarah, and asked if they could meet her. She gladly said yes, and they greeted her at the stage with hugs and a letter. Then, I shot up out of my seat, ready to ask an awesome question. My mind was racing when I was handed the microphone, knowing these people I had dedicated my life to were watching me. I realized I would never get the change again, and I took a huge chance. I asked Evan Peters for a hug. He looked at Emma for approval, who nodded and smiled. I then made my way up to the stage, where I hugged my idol and gave him the cute little panda bear hat. He put it on immediately, and wore it for the rest of the night. Yes, I understand it was annoying to ask that, but I had the chance and I went for it! Denis O’ Hare even took a picture of Evan wearing it, and then tweeted about it. 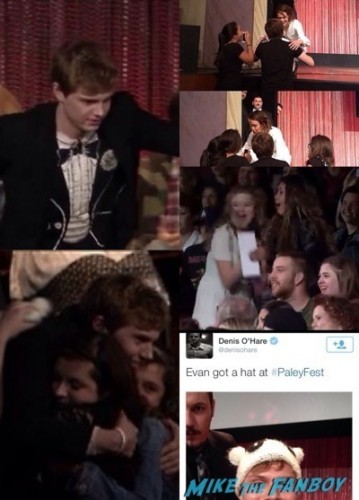 Following this was the great autograph mob. It was completely insane, but the cast was happy to sign! They took pictures, signed, and talked to fans. It was beautiful. In the end, I got a picture signed by Emma Roberts, Sarah Paulson (she signed it twice), Kathy Bates, Angela Bassett, and Evan Peters! And also, my sister got Emma to sign her program. It was a night I’ll never forget, with such an amazing cast. Here’s to a successful Paleyfest!