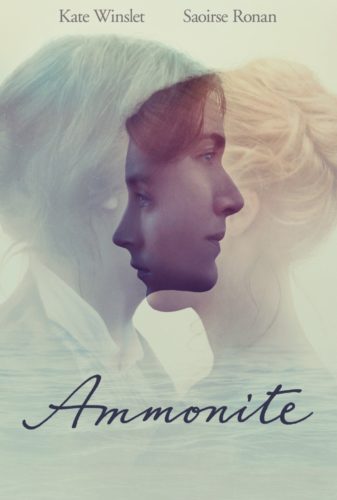 Certain celebrities are always amazing, no matter what movie they’re involved in, which is exactly why I wanted to watch “Ammonite.” Kate Winslet works wonders once again in arguably her finest film performance to date and has a stunning scene partner with the sensational Saoirse Ronan.

In the 1840s, Mary Anning (Kate Winslet) was making a name for herself in the Southern English coastline of Lyme Regis as a self-taught paleontologist. Despite her reputation and past acclaim, Mary struggles to make a living and support her widowed mother by selling fossils to tourists. While visiting the area, admirer Roderick Murhison (James McArdle) and his young wife Charlotte (Saoirse Ronan) visit Mary to learn more about fossils. Unable to continue traveling, Roderick requests Mary to take care of his wife Charlotte and pays for her services. Struggling to make ends meet, Mary reluctantly agrees and struggles to teach the same passion about her work to Charlotte. Despite their initial differences and perspectives, the two soon see similarities and eventually succumb to their urges before beginning a passionate love affair. 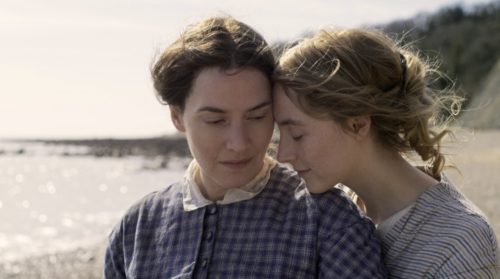 It’s only fitting Kate Winslet and Saoirse Ronan finally work together considering their parallel careers. They’re both extremely different, yet strangely similar. In the span of 13 years, Kate Winslet had (5) Academy Award nominations by the time she was 33. In the past 12 years, Saoirse Ronan has been nominated (4) times for an Academy Award and just turned 26. “Ammonite” is a rare instance where two terrifically talented actresses are at the peak of their careers while still simultaneously feeling like a passing of the torch. Both actresses are amazing and at peak form providing two of their finest film performances to date.

Repression and desire definitely dictate your behavior more than you’re willing to admit. Amazingly both Saoirse Ronan and Kate Winslet wonderfully exhibit the struggles and suffocation of a patriarchal society during the 19th century. Thanks to sparse dialogue, Winslet wonderfully and heartbreakingly portrays her emotions mostly non-verbally, resulting in easily one of her top tier performances. The evolution of Mary magnificently transforms from chaperone to caretaker before blossoming into Charlotte’s lover. Much like the fossils she discovers, Winslet whittles down the hard exterior to uncover something beautiful from the inside. 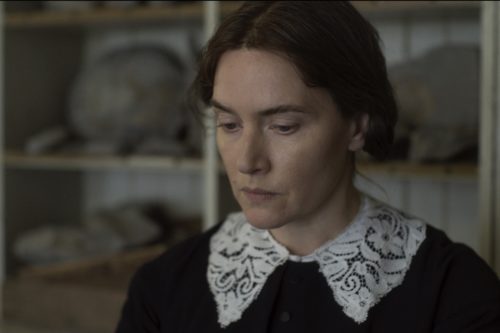 Matching her, Ronan remarkably compliments Winslet with a polar opposite demeanor- prim & proper versus poor & proud. Although they’re drastically different, Ronan reels you in slowly and slyly with her playful nature prodding Winslet’s Mary sensing there’s more than Mary wants to publicly display. These two titans and heavyweights handsomely portray an exhilarating evolution of how a forbidden romance releases each other from the dreadful doldrums of everyday life. Sure period pieces aren’t always everyone’s cup of tea, but Winslet and Ronan are absolutely well worth watching. The final act is one of the most incredible, intense and passionate performances I’ve seen all year long.

Both Kate Winslet and Saoirse Ronan definitely deserve serious awards consideration while both provide Top 5 performances in the Best Actress and Best Supporting Actress categories. However, beyond Winslet and Ronan the film feels less desirable as a whole. Unfortunately, most of the blame belongs to writer/director Francis Lee recycling a similar storyline from his directorial debut, “God’s Own Country.” Francis Lee went back to the well way too quickly and if it weren’t for his two leading ladies, it’s a bare bones LGBTQ period piece. However, “Portrait of a Lady on Fire” not only possesses a similar style and tone, but it’s a more passionate period piece that’s sensually and stylistically stimulating. Neither actress really impressed me in “Portrait” despite being a well-made movie, it was vice versa with “Ammonite” having two great performances anchor an otherwise okay period piece film. When the passion erupts for the lovemaking scene, it’s arguably on par with “Blue is the Warmest Colour,” but those type of beautifully bursts really don’t exist anywhere else. The story stumbles around and you could counterargue it reflects the “Victorian virtues” of the day. However, if it weren’t for cinematographer Stephane Fontaine’s phenomenal eye elevating another period piece and the leading ladies making it enjoyable, “Ammonite” would be just another period piece with a LGBTQ twist. Needless to say without Winslet and Ronan, “Ammonite” would have certainly been a forgettable film.