I was talking to none other than Mr. Billy Beer last night and he was telling me what a hard time he was having with Amy Poehler. I was like, “What!” She’s so nice. He said… Well… not so much anymore!

Now, there are a few people I’ll take at face value and Billy Beer is one of them. So, with that in mind I was like… Man, it might be a good time to do a recap of my first experience meeting Amy Poehler for this weeks Jekyll Or Hyde.

She was really nice, I will say but she wouldn’t do photos and said that she would come back to do photos and ducked out. Doh! That’s okay, as long as someone comes over and signs for everyone I’m cool with that.

Jordana Brewster from Fast & Furious was also a guest on the talk show Amy was appearing on.

check it out after the jump!

As anyone who has read my column before knows, I am trying to finish my Mean Girls poster. Yes, the Lindsey Lohan classic that will be this generations answer to The Breakfast Club (and yes I stand by that last statement). The very talented  Ms. Amy Poehler is going to be taping a television appearance today along with The Fast and the Furious star Jordana Brewster.

4:20 p.m. – I arrived on the scene. I didn’t really expect a lot of people to be here yet, but there are about 4-5 collectors. I brought my Mean Girls poster and my Baby Mama mini poster with me to get signed along with my Faculty DVD for Jordana.

4:38 p.m. – There are a few more people here now, I am very shocked actually at the crowd. I only expected a few people, but there are a number of fans here. Most of them are for Jordana because the Fast and the Furious is opening I think next week.

4:57 p.m. – Hopefully, I can catch Amy going in, if I miss Jordana so be it, I have loved Amy Poehler for such a long time it will be a real treat to get her. I was told she is super nice, and hopefully today will not be an exception.

5:23 p.m. – I have never seen so many cast shots from the Fast and the Furious in all my life! it’s almost comical.

5:31 p.m. – Security is making us wait on the other end of the alley because they are lining up the audience on this side today. I like the other side better, but now comes the mad dash along the alley. I really think the security people do this on purpose so everyone has to run to the other side. Sigh.. Hey man, whatever makes people happy right? Every time this happens I think of Chariots of Fire and the Running Man… “I’ll be back!…. Only in a Rerun.” Classic! Let’s give Richard Dawson a shot out cause he rocks in that movie… ah Richard!

5:44 p.m. – Amy should be coming in at any time. I have my Mean Girls poster at the ready. This is one of my favorite things I have signed. My good friend, who at her request (Well, probably her request but for the sake of argument let’s just say it’s at her request) got Tina Fey and Lindsey on it for me. check out the fun inscription Tina Fey wrote! 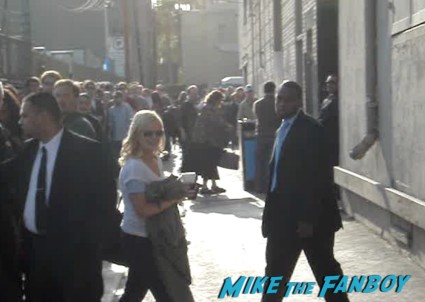 She is so cute in person. She is coming over and signing things for everyone. 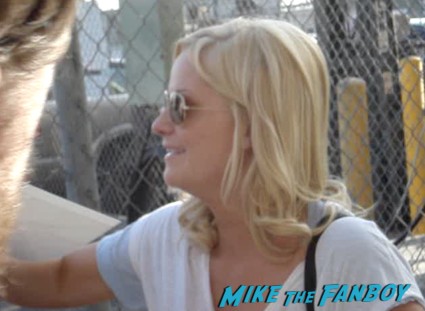 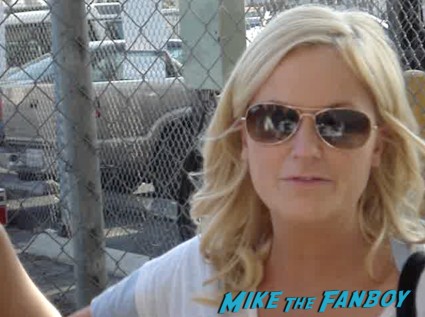 I got her on my Baby Mama poster, but she signed right over her face! Sigh…. 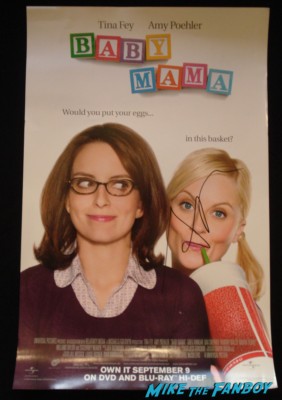 I then asked her if she would sign my Mean Girls poster and I asked her to dedicate it to Mike. 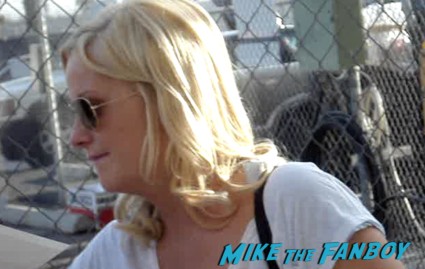 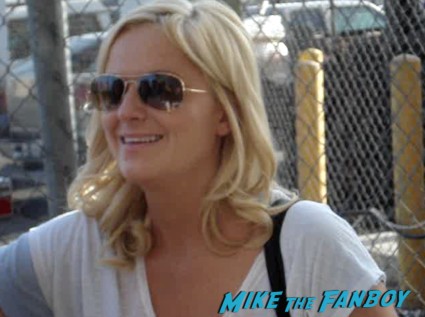 She said, “I love to make it out to someone cause then I know you’re not going to sell it!” 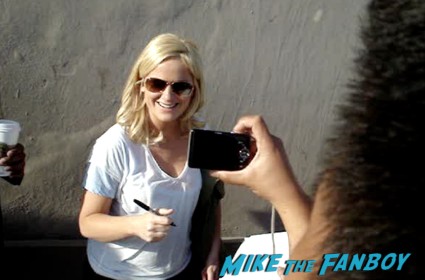 I then asked for a picture, but she said she would do it after the show cause she was in a rush. She signed quite a bit. 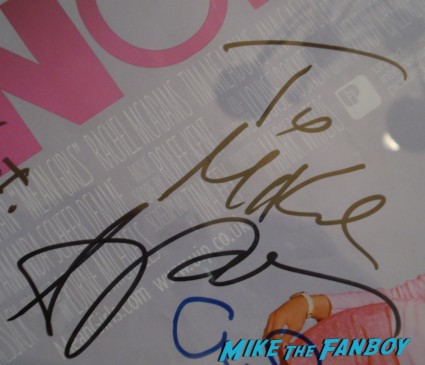 6:44 p.m. – There are a lot of people lined up for the audience today. I have never been to this particular taping so I wonder how many people this theatre holds.

8:25 p.m. – Oh, a blonde girl just walked out and away, it looked like Amy but I’m not sure if it was her or not… This might have screwed my photo opportunity…

8:32 p.m. – Jordana just came out, it’s like a feeding frenzy, I mean there are like 30 people here now and they are just going insane. 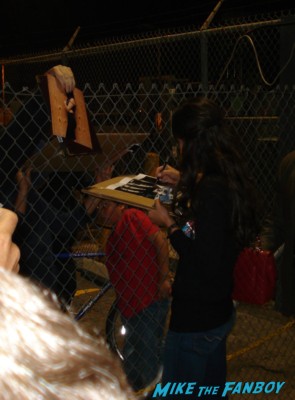 It’s only cause that movie is coming out and personally, it’s really annoying. Sigh, I’m going to have to deal with all these people all week. People are pushing and shoving, you would think that Jordana was Tom Cruise! 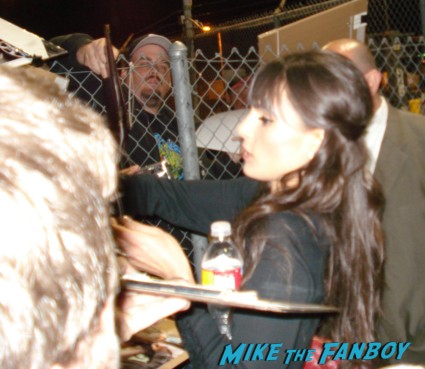 I got her on my Faculty DVD and I asked her for a photo, she was like “… uh yeah” and the security guard took it. 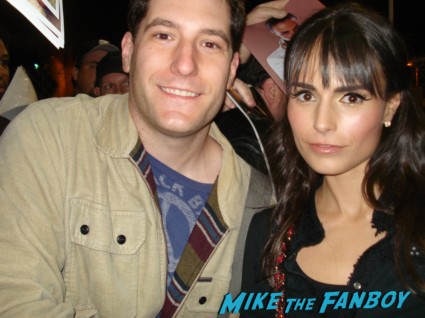 You can see how it came out… She was very nice. 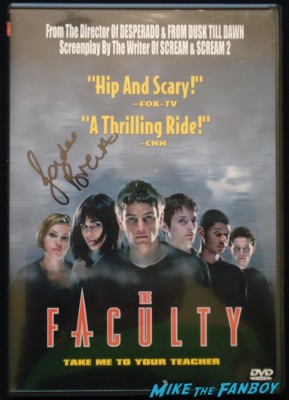 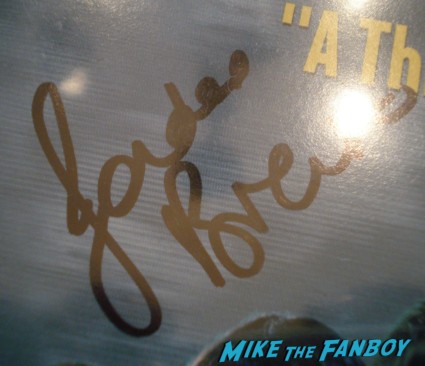 Overall a nice night, even though I didn’t get my pic with Amy. One of the security people confirmed she left… sad times, but there will be another opportunity! 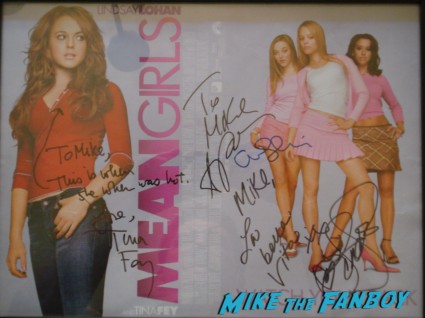 For being awesome, Amy Poehler gets the Happy Theo Award!