We have so many fans of Arrested Development here on MTF and I have to tell you how much crap I got from half of the MTF gang about not being able to attend this awesome event.

Karalee was lucky enough to attend the Arrested Development press conference where the entire cast was there to talk about the new season!

I’m going to let her take it away! Check out her full recap below!

As fans of the resurrected “Arrested Development” count down the days to May 26 — the blessed date when Netflix will release 15 new episodes!

The dysfunction is back in full-effect, with a bit of a darker tone and edge, yet still sprinkled with moments of heart. (One scene in particular actually had me tear up.)

One thing I want to note: This cast sincerely enjoys one another. They teased each other, laughed with ease and truly seemed to relish being in each other’s company again. They genuinely appear to have missed these characters as much as the fans — and it makes the long-awaited return that much sweeter.

Season 4 features a strong roster of guest stars, including John Slattery, Kristen Wiig, Seth Rogen, and John Krasinski. Oh, and there are some feathered friends, as well — specifically a vulture and an ostrich. “The vulture was real and he smelled surprisingly good,” Bateman said. “As far as smell and hitting one’s mark — tip-top.” 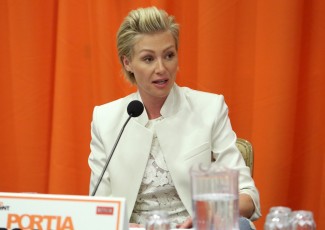 On the flip side, de Rossi had less than favorable reviews of working with the ostrich. “It was terrifying. I was very scared of it. They’re not friendly…but they have nice eyelashes!”

When asked about his writing and producing credits this season, Cera started to modestly explain how he got to “write in the writer’s room this year…” at which point Bateman teasingly interjected: “Mostly lunch orders.” 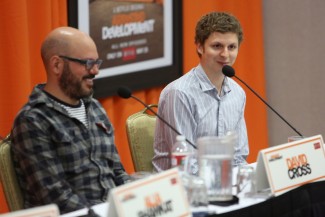 One of the sweetest and funniest moments of the afternoon was when Walter, who plays Lucille with such wonderful zest, was listening to others respond to a question about the role of Orange County in the show. All of the sudden, she shouted, “Orange! For O.C.! I just got it! That’s why everything’s orange (the backdrop, marketing pieces, etc.)!” 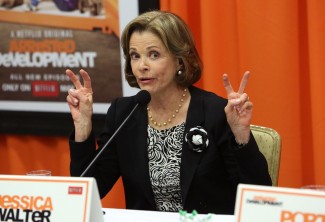 To which de Rossi, seated to Walter’s left, responded, placing her hand on top of Walter’s: “Also, for me, I think the orange represents prison.”

The Season 4 format is different than previous seasons, with each episode focused primarily on one character. SPOILER ALERT: Walter said there are only two scenes all season that feature the nine main characters together. “It took us 30 minutes to calm down, we were so excited to all be together,” in the penthouse, which was “recreated down to the nails in the walls.” 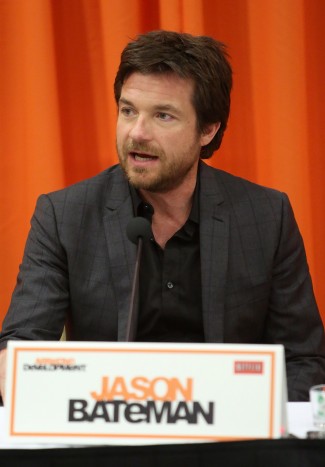 All the episodes are woven so deeply and densely, packaged as part of a three-act saga, that a joke can start in episode one and have a payoff in episodes six and nine. As Bateman pointed out, “It’s not easy, but I hope it will be something appreciated by the fans of the show,” adding that the same scene can pop up in multiple episodes but be told from varying vantage points.

Cera expanded, saying the actors had to play/deliver a line that makes sense “in multiple, different contexts that actually play against each other, and you have to deliver in a way that actually tries to work for all of those. And then you see an episode and you have different information and it means something totally different. That was really confusing.” 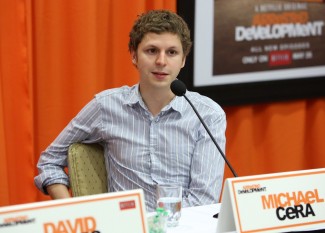 Cross chimed in, saying he’s excited for fans to learn how to expand beyond passive viewing. “With the structure, I think there’s going to be a sense of discovery to it that’s going to be really exciting and kind of redefine what TV can be.”

Here are a few snippets about what each cast member shared about missing their beloved Bluths and one another:

Walter: “I missed the clothes and the juiciness of the writing.”

De Rossi: “I love Lindsay. She’s so earnest, yet so vapid and self-centered. It’s always fun to play the innocent…I definitely missed not having a conscience.”

Bateman: “Michael Bluth’s pretty close to me. I never really left him.…I just like being with everyone again.”

Shawkat: “It was always fun to see what weird thing I was going to do with whom next.”

Cross: “Tobias is a fun, goofy, deluded guy…It’s so much fun to hang out (with the cast).” 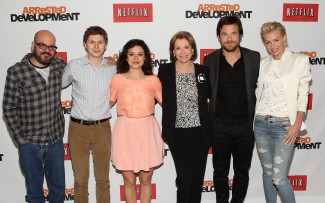 Cera said his character, George-Michael, is “less of a daddy’s boy and kind of trying to take a step back.” Though he predicts that perhaps G-M is “actually turning into Michael, inadvertently — in terms of hairstyle and looks.”

“The Maeby thread is still going,” Cera said. “I don’t know how much to say about that without totally blowing the whole thing.” 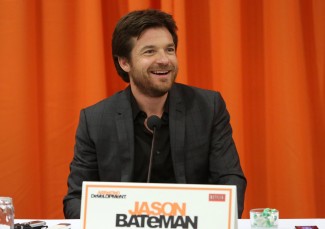 Bateman joked: “I mean, they’ve got kids now if that’s what you’re wondering. There are one, two children I think.”

Back and better, not bitter

When asked about any feelings of validation, having the show come back from the dead, Bateman said, “No bitterness…the emotions when it went down, we just felt grateful we got that far.”
For Cross, though, it wasn’t so Kumbaya. “I was a little pissed it was cancelled…It’s certainly satisfying (to be back).” 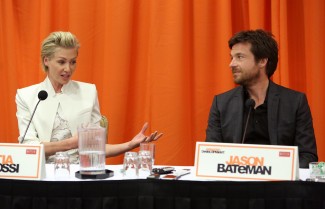 De Rossi said she views it as “a gift that we got to go back and resurrect something that we all really loved, than an audience is anticipating and excited about. I mean, there’s really nothing better.”

Will Tobias be in cut-offs? Will anyone be swathed in blue paint? Inquiring minds want to know! “There are a couple of characters who get blue,” Cross said. “That’s all I’ll say.” He did admit that fans often yell “Blue yourself! or some variation” to him while whizzing by “in a passing car.”

Speaking of things yelled at them by fans, Shawkat noted that when she attended her home school graduation ceremony, which meant there were a lot of “pregnant teens and gang members,” there were “five students who stood up and yelled ‘Marry me!’” 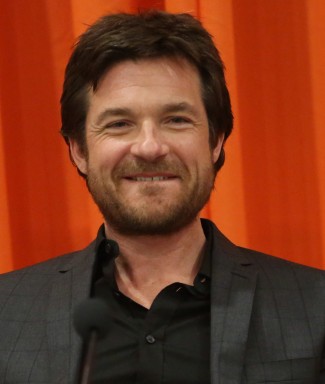 Bateman’s take on his favorite memory from the first three seasons: “Jeffrey Tambor was the first person with any dialogue the first day of shooting the pilot. It was the scene on the boat where he’s getting an award and he has this monologue, this acceptance speech for the award, and we as a family are all assembled there and watching, so we as actors are also sitting there, watching this actor that we all love and respect and are all lucky to work with and watch him do his take on this character. (The cast had not had a table read.) To watch him play his character was so informative to me about what the tone of the show was going to be. As you know, watching him play this character now, there’s no winking, and it’s deadly serious. That was a whole different kind of comedy for me…it established a tone of comedy for the show that I tried to hold onto and follow. 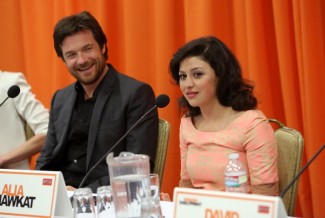 An “Arrested Development” film is still being considered, something de Rossi hopes will come to fruition. “I think we all would love to be part of this crazy family as long as we can,” she said. 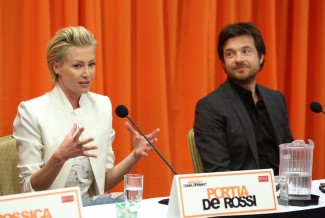 Again, the twist to the upcoming 15 episodes is the structure. By working with Netflix, Hurwitz was able to craft “the first act” of a story, which leaves room for additional storytelling. Now whether that’s executed on the big screen or in future TV episodes is to be determined. Either way, fans of the show can rejoice with the May 26 return. The Frozen Banana is back in business! 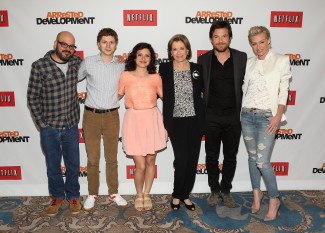