When it comes to the CW superhero series there are four different shows the moral superiority of Supergirl, the zany time tripping of Legends Of Tomorrow and the mainstream Scooby-ness of The Flash. The dark anti-hero of the bunch is Arrow which is just about to start its sixth season. The series has always been rooted in the dark mythos like Batman, with its band of supporting characters like Robin and Batgirl. 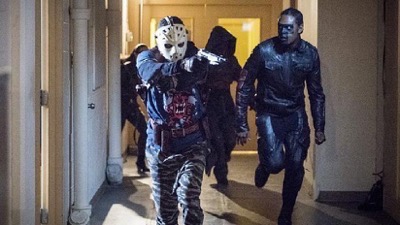 Arrow: The Complete Fifth Season is out now on Blu-ray and the series takes a different turn with Oliver Queen (Stephen Amell) taking over the Mayoral duties of Star City. This newfound turn into public service isn’t a selfless act to pass a new health care law, Oliver tells his new Chief of Staff, Thea (Willa Holland) that this is just a strategy to help the city.

Thea is not just Oliver’s Chief of Staff but also a partner in Team Arrow, her alter ego is Speedy and this season Oliver enlists more help to join up. The new team, including Mr. Terrific (Echo Kellum), helps reignite the spark that Team Arrow needed. The new tensions in the team and the inherent conflict work in the shows favor, Arrow’s squabbling with Wild Dog (Rick Gonzalez) being particularly effective. 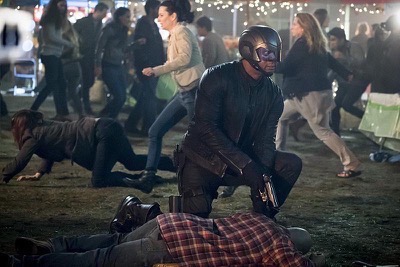 The flashbacks this season, which has always been a staple of Arrow’s storytelling are starting to feel a little bit old and rote. While it’s a nice touch that the other DC Superhero shows have never utilized, after five seasons it might be time to give it up. It’s not as effective as it once was and it feels like the writers are stretching to find things to flashback to at this point.

The dark brooding anti-hero aspect of Arrow has been its calling card for years now but in comparison to the other DC series, Arrow is starting to show it’s ago. Its especially apparent in the crossover episodes. Supergirl, Legends of Tomorrow, The Flash and Arrow all got together for one giant crossover event. The other shows have a lightness and levity that Arrow is sorely missing. It’s like the series has so much excess baggage, it really weighs it down. 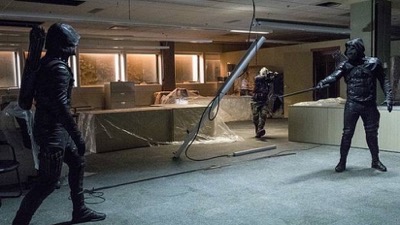 That’s not to say, there’s not still fun to be had in Star City, The fight sequences are still stellar and it is fun to see Oliver in his role as Mayor. I also feel like he should hang up his bow and just continue in this role, letting the sidekicks take over from now on. That would actually be a nice twist, but then there would probably have to be flashbacks to season one when Arrow wasn’t the Green Arrow and then we’re all stuck in a vicious loop. 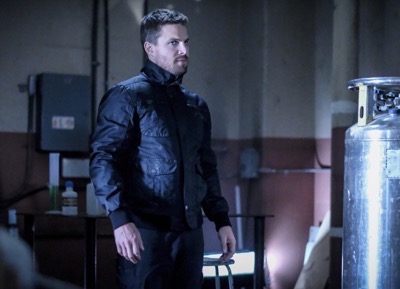 Arrow: The Complete Fifth Season heads to Blu-ray in a find transfer thanks to Warner Bros Home Video. The transfer is solid and most definitely ahead of the broadcast version of the series. The tone of the show is very dark and this doesn’t help the picture fallout, there are some sequences that are barely lit and they don’t make the transition very well. They are few and far between but still worth mentioning. When the series is actually lit, the details are excellent and the exterior scenes look great as well. 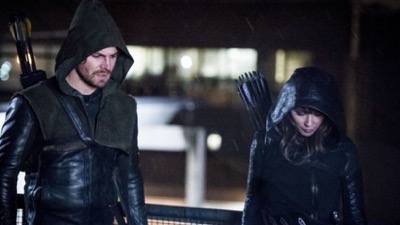 Deleted scenes on all four discs

The New Team Arrow – This is a spotlight on the new characters joining up.

Allied: The Invasion Complex – This is a look at the cross over episode.

Arrow 2016 Comic-Con Panel – This is the SDCC panel that you don’t have to camp out all night to see.

Returning to the Roots of Arrow: Prometheus – This is a look at the big bad of the season. 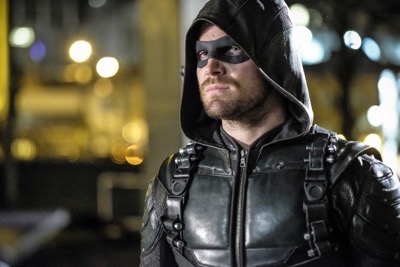 Overall, While Arrow is starting to show it’s age, the series is taking steps in the right direction to correct itself. I’m not sure if it’s enough to correct the course of the series, but it’s enough to make me tune in next season. The fight sequences are stellar and Stephen Amell and his raspy Arrow voice are in fine form once again. Even with the flaws mentioned, Arrow is still worth checking out!

Arrow: The Complete Fifth Season is out now on Blu-ray!