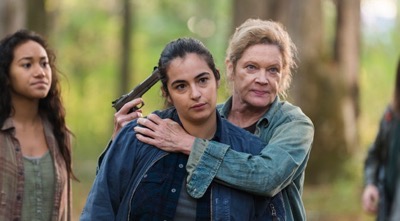 So that moment I’ve been predicting since way back is here as Tara (Alana Masterson) spilled the beans to Rick (Andrew Lincoln) last week and now our Alexandrian group is off to the Oceanside ladies to get the much needed guns they have to appease The Scavengers to help them fight the Saviors. They set off some dynamite to scare the residents and then like cattle they coral them all into one spot and Rick speaks in a plea for them to join their fight against the Saviors. If not then they’re just going to take their guns anyways. They had sent Tara in to talk to Natania (Deborah May) first but, big surprise that didn’t work at all and she is nothing but strongly opposed to her people being put in danger. It’s understandable that she is too scared for what might happen to her people but at the same time it’s a lot less interesting for the show for them to not get involved. Now the part that threw me off was while they were having this little chat a small herd of barnacle covered sea walkers comes out of the woods and they quickly team up to take them out. Watching the scene as they gun or stab down the slimy sea creatures I imagined was the perfect scenario to get them to join forces. But that old biddy Natania still won’t have it and in the end our Alexandrians take all of their guns with an apology but still are robbing them of their defenses. I can’t believe they took ALL their guns! C’mon now how are they supposed to defend themselves not only from another possible threat but if the Saviors do win they’re gonna need them. Not cool Rick. 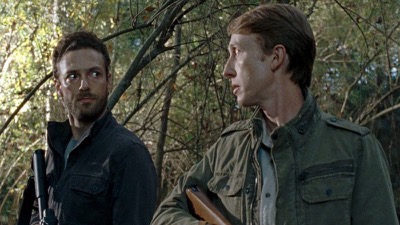 And speaking of offers, the Oceanside people didn’t accept Rick’s to join the fight but, over with the Saviors Negan (Jeffrey Dean Morgan) is trying to recruit Sasha (Sonequa Martin-Green) to join his merry bunch of asshats. Well even though she didn’t get killed it seems she didn’t have any success in ending Negan’s life either. While I understand that generally these episodes are only an hour and there are only so many in a season, I am bummed we didn’t get to see how much damage she did in her one woman assault. That being said after Negan saves Sasha from being raped by Savior Dave (Martinez) he pitches her to come over to his side. His mind is so all over that he has no problem killing a man without a second thought but he will make sure to protect the woman who tried to kill him from being harmed. It’s so weird that Negan’s arrogance is so large that even though Sasha came in guns blazing that he still has enough trust in her to join his group. I guess it’s been working well for him thus far so he just thinks he’s that awesome of a boss. In the end she agrees to join his ranks but as we see later on when she talks to Eugene (Josh McDermitt) through a closed door that she’s playing possum and just trying to find another chance to take him out. She tries to convince him that she can’t see bringing any harm to their friends so she asks if he can help her take her life by getting her a weapon. Unfortunately what Eugene brings her is the famous pill back from a few episodes ago that was meant for one of the girls of Negan’ harem. The fact that they even bothered to bring this pill back into the story means that I have no idea for who but it has all the signs to be one persons’ demise in the near future. Interesting revelation I saw someone bring up online is that this proves Eugene has indeed switched sides. If he was being an undercover agent he would’ve confessed his plan to Sasha when she talked about taking her own life. Sad but true fact. I still feel when the actual moment comes for him to harm one his former friends he won’t do it but for now his loyalties are clear. We’re left just with Sasha getting the pill and showing her frustration with this predicament so we’ll have to wait to see what happens. 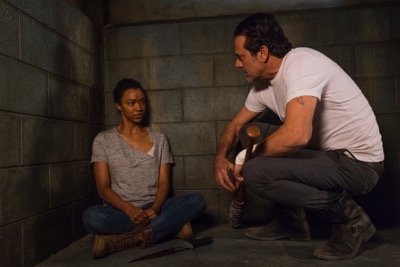 Back at the Hilltop we have one brief scene with Maggie (Lauren Cohan) and Gregory (Xander Berkeley) outside of the walls where we find out Gregory is more of a pussy than we had even previously thought. He tells Maggie when asked that he HAS killed a walker before but when a couple of random ones stray in from the forest he can’t defend himself and Maggie has to rescue him. To which she deduces and he does not argue that he hasn’t in fact killed one before. We’re given a small moment where he stands over an unsuspecting Maggie holding his knife and we can see the thoughts of stabbing her are going on in his head because she is a threat to his leadership but if he can’t kill a mindless zombie how is he going to kill someone who actually has a mind and soul? Sometimes it baffles the hell out of me how this guy ever became the leader of this community! But I guess he must have strengths somewhere else. 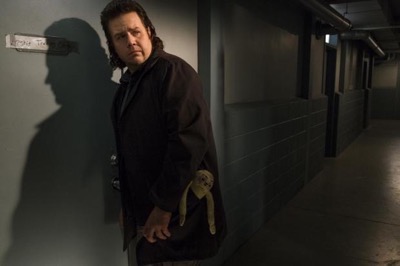 Finally in the closing moments of the episode we have the group returning to Alexandria and not only is Rosita (Christian Serratos) back but she brought someone with her. It turns out our man in the shadows at the end of last week was none other than damn Dwight (Austin Amelio) himself and apparently he wants to help them. I’m not falling for this BS. Negan had previously told Sasha that he knows Rick is up to something so this coincides with that way too nicely. I think this is part of his plan and if I’m right it’s just going to give me all the more reason to hate Dwight more. This guy has been nothing but bad news the whole time he’s been on the show. 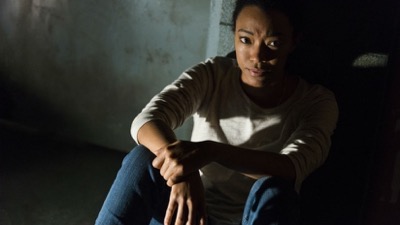 Next week it’s all going down! Let’s hope for a good season finale!