Sweet right? Billy met pretty much everyone in the cast minus one. Can you guess which on? Can you? I can. LOL… Sigh…

Check out Billy Beer’s report from the Revenge cast event after the jump!

(Editor’s Note: Captain America was awesome! You are crazy! M-)

I met Emily right before Revenge was aired for the first time. She was on a talk show, and there was only 3 of us there to greet her. She was a sweetheart, and took pictures with me and Travo. 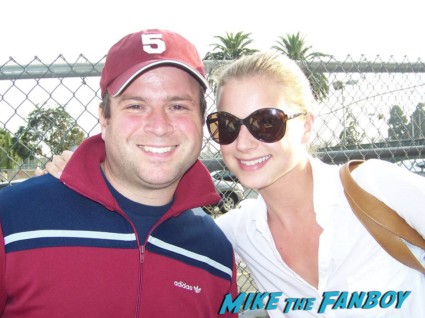 I’ve actually watched the first few episodes of Revenge. It was good, but it’s hard to keep up with those shows that require you to see every episode to know what going on.

So, I’ve slipped a whole lot and really don’t know what’s going on with the show, but every time I’ve seen cast members, they’ve been super nice. So I bring a couple of cast pictures, and a sexy pic of Emily to get done today. Let the adventures begin.

I decided to go to the premiere right after work. C.B. is supposed to be saving me a spot, but while I’m on my way, I find out he’s not even close. It was alright. By the time I get there, nobody was even there. I ask security where I should stand, and he points me to the spot. My buddy graphers get there, and we’re pretty much set. Then another security guard tells us we have to go somewhere else while they rope off the area. Understandable. After waiting a while, I finally go back and ask the guard if it’s OK to come back. He says yes and then we make our way back to our spots. The same places we started. Well about 45 minutes later, a guard then tells us we need to stand someplace else. We calmly make our way over a few feet, only to have a family run and take the best spots. REALLY! We’ve been all calm and then you decide to dick us over? I tell them sorry, but we’ve been there hours before they even got there, and I get a “too bad” response. REALLY! Great lessons to teach your kids that are there to get you autographs while they probably should be doing homework, actually in school or actually enjoying being a kid. 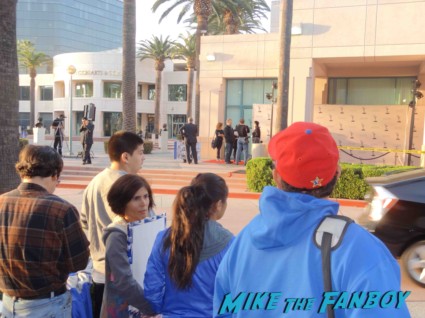 Time to get to the arrivals.

First cast member to arrive is Henry Czerny. By now the crowd has gotten a bit bigger. Still not a huge crowd. At MOST it’s about 2 deep. Of course people are impatient, and run over to the first place he stands. He’s stuck in that first place. Finally the publicist takes him down the line. He’s taking his sweet time with his graph, but he finally signs my cast piece. By now they were saying only one each. So looks like I’ll have a cast picture left over. I’m not going to force anything. There are a number ladies with posters and camera on the other end of the line which includes the lovely Ms Pinky. He finally makes his way down there, and all is happy. 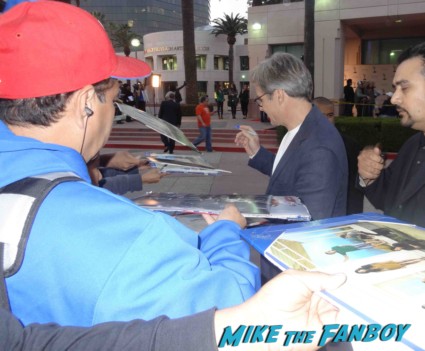 Nick Wechsler is the next person to arrive, and it’s almost a carbon copy of what happened with Henry. The people on the other end are starting to get a little upset cause they are spending more time on our end and not theirs. Which is understandable since a bunch of the people don’t even know who these people are. I get my one graph from Nick, and he makes his way down. 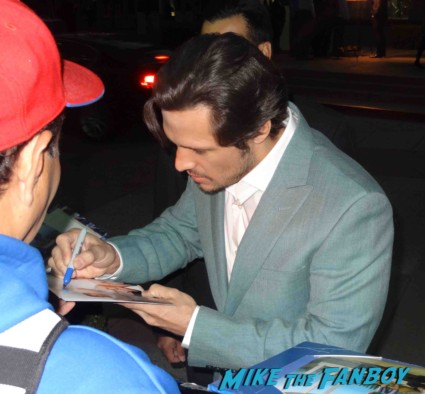 Gabe Mann follows. He actually goes down to the end of the fans, and stays there a while. A lot of the graphers go running to that side. I wait, but someone then tells me they heard he was only going to sign on that side. I make my way over there, and stand behind Ms. Pinky. I tell her that it’s me behind her and not to worry. I’m was pretty much then given death threats not to put my pictures over top from other people trying to get a picture with everyone. WOW! Then I was called out for all the graphs I had already gotten…..WRONG! Hadn’t gotten Gabe yet, and only was getting one each. Believe it or not, there are some respectful fanboys out there, but I do understand their frustration.  Half the time I’m in the front, it looks like I’m wear a hat made out of 100 boarded pictures. After the fact, I explained myself and we all hugged it out. Ms. Pinky put a good word in for me too. 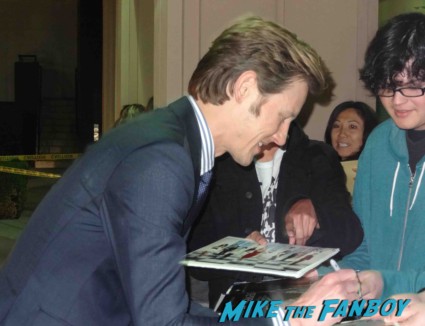 Madeleine Stowe is next to arrive. She comes from the other side and goes straight to the carpet. We yell for her and get a half hearted wave. The best part was the security guard was warning us not to yell to them? WHAT!? The how the heck are they going to come over. It’s a fan pit. Are we supposed to just sit there and be in amazement that there are TV actors and actresses in front of us?

While we are calling for Madeleine, the chants turn into chants for Josh Bowman who just arrived. The fans start singing him Happy Birthday. He goes to the interview line instead, so now we are quietly yelling for both. That’s when Christa B. Allen arrives. Since the interview area and red carpet were being used, Christa B headed over to the fan side. While she was over there, Josh then made his way to us. It was nice, cause a lot of the graphers were focusing on Christa B. they didn’t even notice he was there. 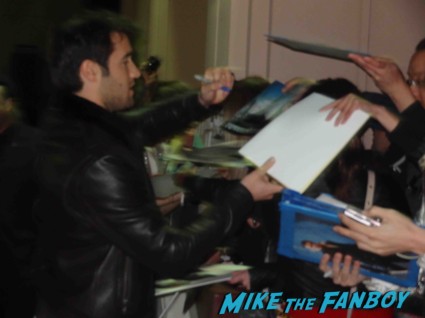 I got my cast piece signed, and then waited for Christa B.

She was looking super cute, so I asked for a picture too after she signed. 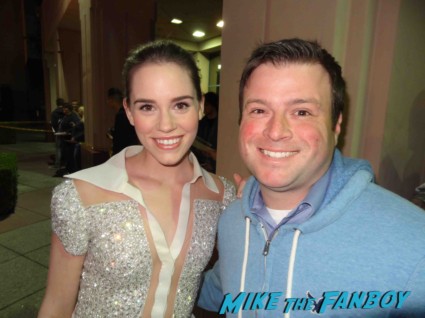 Next we see Connor Paolo arriving. He comes straight over to us, and makes his way down the line. This whole cast except for Madeleine is being really good about taking care of their fans. 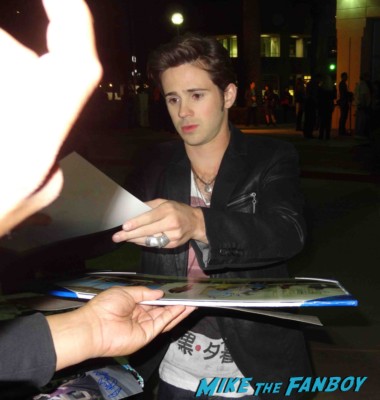 Now for some reason there’s a little down time. Still no Ashley, Madeline or Emily VanCamp. What sucks is the later they are, the less chance they’ll sign cause they have to get in. Ashley was the first of them to arrive, and as I guessed, they are rushing her through the lines. She doesn’t come over. Finally Emily arrives, and the same thing. She waves a bunch, but no graphs. Everyone starts packing up. I stick around just in case there’s a chance she comes over after everything. She makes her way inside. Then like 30 seconds later as I’m starting to walk away, here comes a tall blonde making her way to the fan section! NO WAY! I go running over, and she’s signing away. I knew she was still on the light side! I get my cast piece done, and then she signs my sexy pick.  She personalized it, which is fine by me, 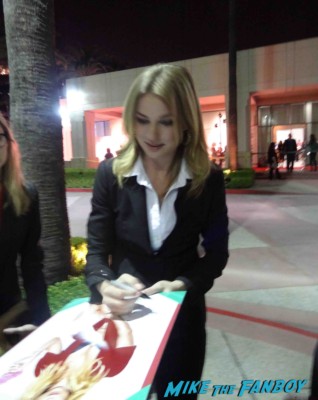 and then I’m lucky enough to get a picture too. 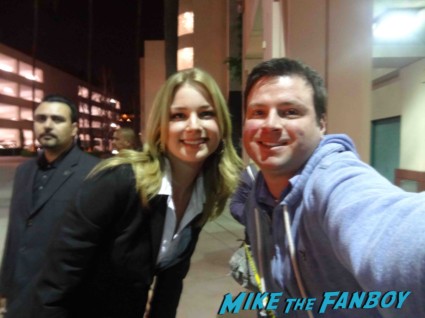 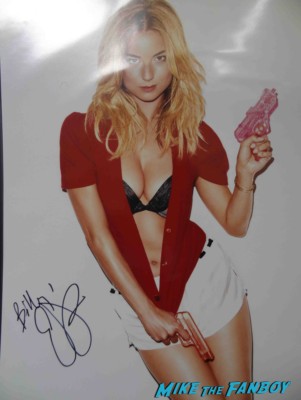 I decide to stick around for exits, and after seeing things I never want to see again done by C.B.,

(Editor’s Note: Ummmmm Billy… That was disturbing and I don’t even know what you were talking about and I’m… Just ewwwww! M-)

the cast starts to exit. They are all hurrying out. Luckily, the one person that did come over was Ashley. We kinda guilted her cause almost everyone else did it. Love her accent by the way! I actually had her start my second cast piece too, just cause she was signing a bunch. 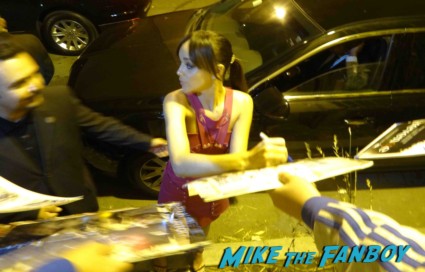 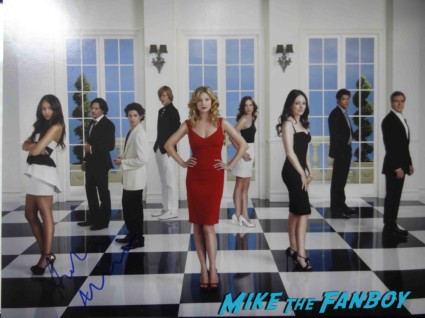 Well, another good adventure. Time to find myself some Happy Hour specials, and start moving Madeleine up my worst signers list. And yes I’m sure some of you have gotten her before, I don’t need to hear the stories. It just amazes me that a whole cast but 1 person would sign. Well I’m off Happy Hour somewhere. 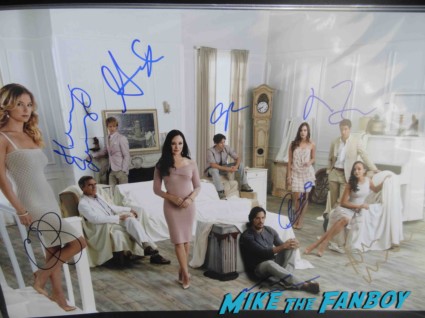