This dress was used on the TV series Don’t Trust The B- In Apt. 23, at least that’s what Billy SAYS. I haven’t seen the screen matched proof yet, like my Courteney Cox signed Scream 2 outfit. But still.. I give Billy the benefit of the doubt.

He also had an awesome photo for Aaron Paul!

Welcome back to Billy Beer’s bar stool. Today we are off to try and get Arron Paul and Krysten Ritter who oddly enough were boyfriend and girlfriend on Breaking Bad. Aaron was out promoting Exodus, and Krysten was promoting Big Eyes. Let the adventure begin.

Now when I say adventure, I usually mean just driving form Oceanside to LA in time to get there. Usually I’m able to catch rush hour traffic the whole, and today was no different. Luckily I’m still able to make it with about 15 minutes to spare. When I get there, there is no barricade set up. It’s literally 3 row of people standing there. This is going to be interesting!

Krysten was the first to exit. I have been a big fan of hers since she was on The B**** in Apt. 23. I’m a HUGE fan of that show. Sad it only lasted 2 seasons. I actually have a screen worn dress for her to sign We call for her, and she comes right over. People are being somewhat civil, but being three rows back, I decide to go a little bit to the side. The only problem was she wasn’t moving. UGH! Then as she finally made her way over to my side, security decided it was time for her to leave. I try to blurt out that I had something from the show for her to sign, but she was already walking away. I decided to run to where her car would exit for one last try. It almost never works though.

I run over there, and as the car gets close, the driver motions for us to get out of the way. He picks up speed, but then at the last minute, the car stops. By this time 2 other girls made their way to the cars. I yell to her, and she rolls down. I explain to her what I had, and she tries to sign it. Clothing is not the easiest thing to sign. She does her best, and then I ask her to put Chloe on it to (Her character name). She was like “Sure, and I’ll give you an XO” Yay! 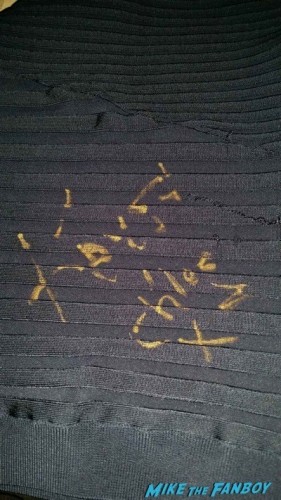 The girls then say they don’t have anything for her to sign, they just wanted a picture. She then gets out of the car and takes pictures with all of us and the rushes off. I really didn’t care if I missed Aaron, I was happy getting the dress signed! 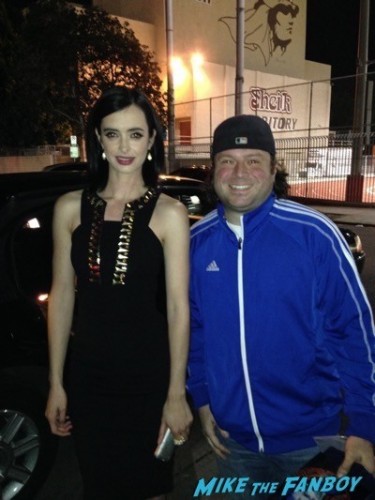 When I get back, I found out Aaron hadn’t left yet. He’s been a little tough of late, but I’m keeping my fingers crossed. When he finally leaves, he’s with his wife. We call for him, at first it looked like he was leaving, but then he finally made his way over. He was in good spirit today. Paps of course ask him the SAME OLD OVERUSEDED questions about the word Bitch. 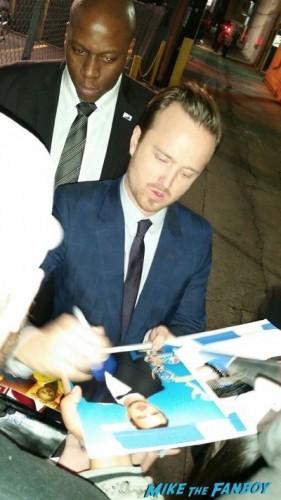 I reach out and ask him if he could sign the Terry Richardson photo. He grabs the board and proceeds to sign it. It’s taking a little longer than usual though. I’ve heard of him righting “$50” on photos and telling people that’s what it’s worth on ebay (which actually cracks me up!) I thank him, and he smiles. I turn it around, and he had drawn glasses and a smile over his face. I actually found it quite hilarious, and now have the picture hanging in my cubicle at work. 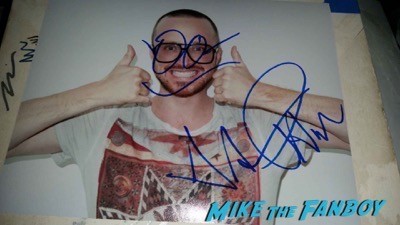 I didn’t bother trying for a photo-op, it started getting a little crazy. I was happy with what I got. Now if I run, I can still get Happy Hour at B-Dubs! Till next time.