Any time a new Marie Lu book is out in the world, we have a cause for celebration! Warcross kicks off a terrific new futuristic series. I also have a look at Laini Taylor’s novella, Night of Cake and Puppets, will be available for the first as a physical book and (bonus!) it’s filled with lavish illustrations. 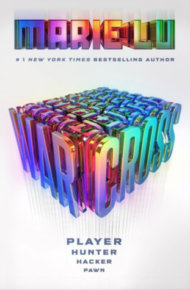 Pitch: A science fiction thriller where a girl is hired to spy on other contestants in a global virtual reality game

Story: “For the millions who log in every day, Warcross isn’t just a game—it’s a way of life. The obsession started ten years ago and its fan base now spans the globe, some eager to escape from reality and others hoping to make a profit. Struggling to make ends meet, teenage hacker Emika Chen works as a bounty hunter, tracking down players who bet on the game illegally. But the bounty hunting world is a competitive one, and survival has not been easy. Needing to make some quick cash, Emika takes a risk and hacks into the opening game of the international Warcross Championships—only to accidentally glitch herself into the action and become an overnight sensation.

Convinced she’s going to be arrested, Emika is shocked when instead she gets a call from the game’s creator, the elusive young billionaire Hideo Tanaka, with an irresistible offer. He needs a spy on the inside of this year’s tournament in order to uncover a security problem . . . and he wants Emika for the job. With no time to lose, Emika’s whisked off to Tokyo and thrust into a world of fame and fortune that she’s only dreamed of. But soon her investigation uncovers a sinister plot, with major consequences for the entire Warcross empire.”

Quick take: My new favorite Marie Lu book! Warcross is filled with action, mystery, great world-building and a little romance. The pace is brisk and there are plenty of twists and turns as this book sets up a terrific new series. So much fun! 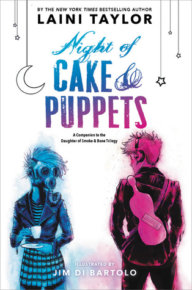 Pitch: A perfect confection of a magical first date

Petite though she may be, Zuzana is not known for timidity. Her best friend, Karou, calls her “rabid fairy,” her “voodoo eyes” are said to freeze blood, and even her older brother fears her wrath. But when it comes to the simple matter of talking to Mik, or “Violin Boy,” her courage deserts her. Now, enough is enough. Zuzana is determined to make the first move, and she has a fistful of magic and a plan. It’s a wonderfully elaborate treasure hunt of a plan that will take Mik all over Prague on a cold winter’s night before leading him to the treasure: herself! Violin Boy is not going to know what hit him.

New York Times bestselling author Laini Taylor brings to life a night only hinted at in the Daughter of Smoke & Bone trilogy—the magical first date of fan-favorites Zuzana and Mik. Originally published as an ebook, this new print edition will include breathtaking black and white illustrations, plus bonus content in a gorgeous package perfect for new and current fans of the series.”

Quick take: So I must confess I haven’t read Daughter of Smoke and Bone and the good news is you really don’t need to in order to enjoy this novella. There are certainly references to major incidents in that series, but this is really about a magical and dreamy first date between two people who have barely spoken to each other. It’s so charming and wonderfully illustrated that I kept smiling as I read it. 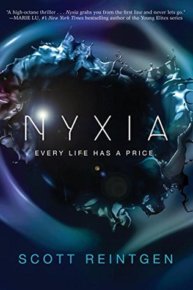 Story: “Emmett Atwater isn’t just leaving Detroit; he’s leaving Earth. Why the Babel Corporation recruited him is a mystery, but the number of zeroes on their contract has him boarding their lightship and hoping to return to Earth with enough money to take care of his family.

Before long, Emmett discovers that he is one of ten recruits, all of whom have troubled pasts and are a long way from home. Now each recruit must earn the right to travel down to the planet of Eden–a planet that Babel has kept hidden–where they will mine a substance called Nyxia that has quietly become the most valuable material in the universe.

But Babel’s ship is full of secrets. And Emmett will face the ultimate choice: win the fortune at any cost, or find a way to fight that won’t forever compromise what it means to be human.”

Quick take: This is strongly influenced by The Hunger Games and Ender’s Game so if you liked those books, you’ll probably like this. (I hope the next book in the series provides more separation.) Nyxia is a breezy read with lots of action and a diverse group of characters. There’s some suspenseful plotting and a fun bunch of misfits so a lot of good things here. 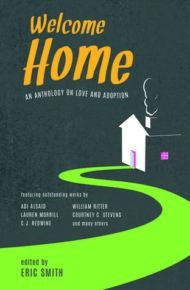 Pitch: 29 authors contribute snapshots of all different kinds of families

Quick take: I love this theme about presenting families in all its many, many variations. Since there are so many stories, they are short. Very short. This collection is great at showcasing a critical and often sad. It’s like a series of bites, but not a full snack. Still, there are some great moments here with my favorite by William Ritter.

Girls Made of Glass and Snow by Melissa Bashardoust 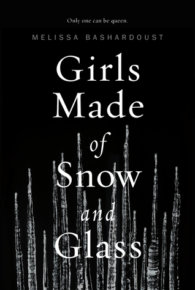 Story: “Frozen meets The Bloody Chamber in this feminist fantasy reimagining of the Snow White fairytale

At sixteen, Mina’s mother is dead, her magician father is vicious, and her silent heart has never beat with love for anyone—has never beat at all, in fact, but she’d always thought that fact normal. She never guessed that her father cut out her heart and replaced it with one of glass. When she moves to Whitespring Castle and sees its king for the first time, Mina forms a plan: win the king’s heart with her beauty, become queen, and finally know love. The only catch is that she’ll have to become a stepmother.

Fifteen-year-old Lynet looks just like her late mother, and one day she discovers why: a magician created her out of snow in the dead queen’s image, at her father’s order. But despite being the dead queen made flesh, Lynet would rather be like her fierce and regal stepmother, Mina. She gets her wish when her father makes Lynet queen of the southern territories, displacing Mina. Now Mina is starting to look at Lynet with something like hatred, and Lynet must decide what to do—and who to be—to win back the only mother she’s ever known…or else defeat her once and for all.

Entwining the stories of both Lynet and Mina in the past and present, Girls Made of Snow and Glass traces the relationship of two young women doomed to be rivals from the start. Only one can win all, while the other must lose everything—unless both can find a way to reshape themselves and their story.”

Quick take: I liked some of the ideas and the empathy built around the evil stepmother, but I wish the character motivations were less muddled. Overall, it wasn’t entirely successful for me, but others who relish anti-heroes may like it more.

Thanks to Penguin Teen (Warcross), Little, Brown (Night of Cake and Puppets), Random House (Nyxia), Fluxx (Welcome Home) and Macmillan (Girls Made of Snow and Glass) for providing the books for review. Want more details on my impression of these and other books? Check out my ratings and full reviews at Goodreads. 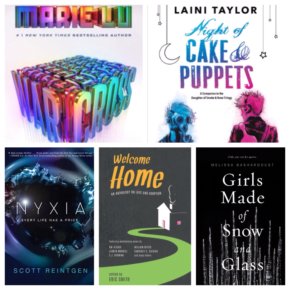