I debated on whether or not I would read the script for Harry Potter and the Cursed Child. I hate being spoiled so I felt my dilemma boiled down to: do I want to spoil the play by reading the script or do I hope no one spoils it before I can see the play? Since Broadway has yet to announce a date and I was already seeing spoilers, it was time to read it. So does it re-capture the magic? Well, here’s my (non-spoiler) quick take on the 8th Harry Potter story as well as several other new books in a series! 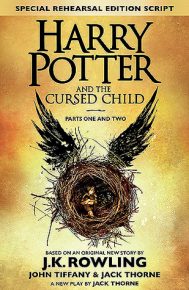 Pitch: The closest we’re going to get to another Harry Potter book

Story: “Based on an original new story by J.K. Rowling, Jack Thorne and John Tiffany, a new play by Jack Thorne, Harry Potter and the Cursed Child is the eighth story in the Harry Potter series and the first official Harry Potter story to be presented on stage. The play will receive its world premiere in London’s West End on July 30, 2016.

It was always difficult being Harry Potter and it isn’t much easier now that he is an overworked employee of the Ministry of Magic, a husband and father of three school-age children.

While Harry grapples with a past that refuses to stay where it belongs, his youngest son Albus must struggle with the weight of a family legacy he never wanted. As past and present fuse ominously, both father and son learn the uncomfortable truth: sometimes, darkness comes from unexpected places.”

Quick take: It’s a fine story, but isn’t quite up to snuff with the previous books (which is an admittedly a high bar). The Cursed Child seems like it was written to answer a lot of the fandom’s theories and favorite ships. The result feels like we’re re-treading familiar ground and not getting a fresh and new experience. Still, it was great coming back to Hogwarts and seeing so many beloved characters, and I’m sure the stage experience will have some stunning images. I enjoyed some of the big plot twists, but it doesn’t feel like it’s on the same scale as the original books.

A Torch Against the Night by Sabaa Tahir 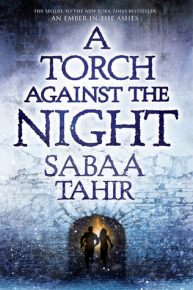 Pitch: The second book in the popular and critically acclaimed YA fantasy series An Ember in the Ashes

Story: “A Torch Against the Night takes readers into the heart of the Empire as Laia and Elias fight their way north to liberate Laia’s brother from the horrors of Kauf Prison. Hunted by Empire soldiers, manipulated by the Commandant, and haunted by their pasts, Laia and Elias must outfox their enemies and confront the treacherousness of their own hearts.

In the city of Serra, Helene Aquilla finds herself bound to the will of the Empire’s twisted new leader, Marcus. When her loyalty is questioned, Helene finds herself taking on a mission to prove herself—a mission that might destroy her, instead.

Quick take: This is one of the top tier YA series so pick up these books! Like An Ember in the Ashes, this is well-written with great characterizations, lots of action and unique world-building. The story moves quickly and we get a peek at a lot more layers to this world with some surprising new twists and turns. A terrific entry in this series which just keeps getting bigger so I’m hoping for lots more to come.

The Beauty of Darkness by Mary Pearson 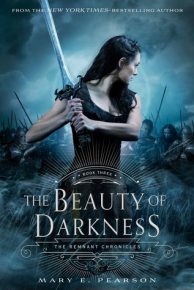 Pitch: The conclusion to The Remnant Chronicles – a YA high fantasy political and romantic saga

Story: “Lia and Rafe have escaped Venda and the path before them is winding and dangerous – what will happen now? This third and final book in The Remnant Chronicles is not to be missed.

Quick take: This final book is almost twice the length of a normal YA novel so you know there’s a lot of story left to end this big fantasy series. This is a really satisfying ending with resolution and heartache as loyalties, responsibilities and love is tested. 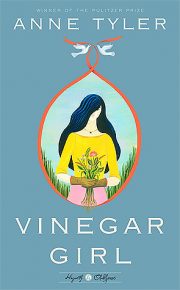 Pitch: A modern take on Shakespeare’s Taming of the Shrew

Story: “Pulitzer Prize winner and American master Anne Tyler brings us an inspired, witty and irresistible contemporary take on one of Shakespeare’s most beloved comedies

Kate Battista feels stuck. How did she end up running house and home for her eccentric scientist father and uppity, pretty younger sister Bunny? Plus, she’s always in trouble at work – her pre-school charges adore her, but their parents don’t always appreciate her unusual opinions and forthright manner.

Dr. Battista has other problems. After years out in the academic wilderness, he is on the verge of a breakthrough. His research could help millions. There’s only one problem: his brilliant young lab assistant, Pyotr, is about to be deported. And without Pyotr, all would be lost.

When Dr. Battista cooks up an outrageous plan that will enable Pyotr to stay in the country, he’s relying – as usual – on Kate to help him. Kate is furious: this time he’s really asking too much. But will she be able to resist the two men’s touchingly ludicrous campaign to bring her around?”

Quick take:. Pyotr doesn’t quite clash with Kate in a charged battle of wills like you might expect from Taming of the Shrew. Anne Tyler focused on some of the bigger themes of change and self-identity so this is a refreshing, if unexpected, take on the story.

The Thousandth Floor by Katherine McGee 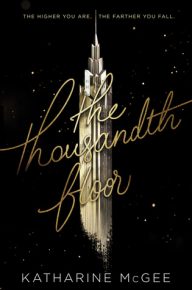 Story: “New York City as you’ve never seen it before. A thousand-story tower stretching into the sky. A glittering vision of the future, where anything is possible—if you want it enough.

A hundred years in the future, New York is a city of innovation and dreams. But people never change: everyone here wants something…and everyone has something to lose.

Rylin Myers’s job on one of the highest floors sweeps her into a world—and a romance—she never imagined…but will her new life cost Rylin her old one?

Watt Bakradi is a tech genius with a secret: he knows everything about everyone. But when he’s hired to spy by an upper-floor girl, he finds himself caught up in a complicated web of lies.

And living above everyone else on the thousandth floor is Avery Fuller, the girl genetically designed to be perfect. The girl who seems to have it all—yet is tormented by the one thing she can never have.

Debut author Katharine McGee has created a breathtakingly original series filled with high-tech luxury and futuristic glamour, where the impossible feels just within reach. But in this world, the higher you go, the farther there is to fall….”

Quick take: The story’s focus is on the soap opera between the teenagers, but the world is really the star of this book. Author Katherine McGee has tons of fun ideas about life in the future and there’s a lot of thoughtful construction on how society would function in this new environment. It’s recently been optioned for a TV show which is a good fit for exploring this new world. 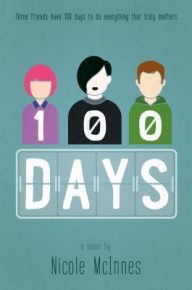 Pitch: Contemporary YA about 3 friends, one of which is dying

Story: “Agnes doesn’t know it, but she only has one hundred days left to live. When she was just a baby, she was diagnosed with Progeria, a rare disease that causes her body to age at roughly ten times the normal rate. Now nearly sixteen years old, Agnes has already exceeded her life expectancy.

Moira has been Agnes’s best friend and protector since they were in elementary school. Due to her disorder, Agnes is still physically small, but Moira is big. Too big for her own liking. So big that people call her names. With her goth makeup and all-black clothes, Moira acts like she doesn’t care. But she does.

Boone was friends with both girls in the past, but that was a long time ago—before he did the thing that turned Agnes and Moira against him, before his dad died, before his mom got too sad to leave the house.

An unexpected event brings Agnes and Moira back together with Boone, but when romantic feelings start to develop, the trio’s friendship is put to the test.”

Quick take: Three different people and three very different points of view. Extra points for featuring some diverse characters and an unusual medical condition. I liked this book, but the flow is a bit jumbled and some of the emotions and plot turns seemed rather abrupt to me.

Thanks to Penguin Teen (A Torch Against the Night), Macmillan (100 Days), HarperTeen (The Thousandth Floor) and Crown (Vinegar Girl) for providing the books for review. Want more details on my impression of these and other books? Check out my ratings and full reviews at Goodreads.