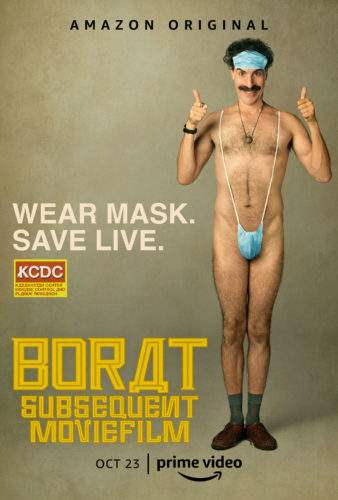 Some surprises are just too good to keep hidden, but Borat’s most glorious return during this perplexing pandemic proves the right remedy. Sacha Baron Cohen brilliantly delivers another disturbing, dedicated and devastatingly hilarious performance in “Borat Subsequent Moviefilm: Delivery of Prodigious Bribe to American Regime For Make Benefit Once Glorious Nation of Kazakhstan.”

After disgracing Kazakhstan 14 years ago with his American movie, Borat Sagadeiv (Sacha Baron Cohen) has been wasting away working in a laborious prison. Borat is soon summoned and rescued for an important mission to restore greatness to Kazakhstan. He must help the country align with premier powerhouses like Russia and North Korea by giving the United States a most gracious gift. Following up his first trip since 2006, Borat’s new amazing American adventures hope to bring back greatness once again. 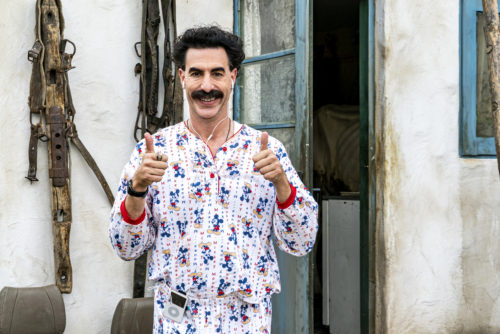 Filmed in secret, Sacha Baron Cohen hilariously makes American audiences laugh once again, but depicts the dangerous sides of overt racism and authoritarianism running rampant in our country. Back in 2006, Borat’s bewildering personality of a misogynistic, anti-Semitic “foreigner” caught unsuspecting individuals off-guard. Sadly, those same type of prejudiced people now proudly boast of their racism and embrace the hate. The film’s anti-fascist agenda showcases the silliness of everyday people in countless scenes and demonstrates how ordinary people are corrupted by lies instead of power like some politicians, which are only heightened during polarized political times.

“Borat Subsequent Moviefilm: Delivery of Prodigious Bribe to American Regime For Make Benefit Once Glorious Nation of Kazakhstan” persists as another, stellar satire in Cohen’s filmography. Cohen’s confidence is in tip top form when performing as Borat. As a series of sequences showcase, Borat’s distinct look is universally recognizable and truly a zeitgeist pop-culture figure everyone will remember as depicted within the film when countless random strangers and fans follow the character incessantly wanting autographs and pictures. Despite depicting him for two decades, Borat’s brilliant, clever comedy still soundly resonates and continues to provide exhilarating entertainment with every interaction. The sophisticated subtleties and nuances sprinkled throughout the film demonstrate how consistently committed Cohen is to his character. How he has not been truly rewarded beyond a Golden Globe for his acting abilities astounds me. Sacha Baron Cohen definitely deserves awards attention for this spellbinding, satirical performance. 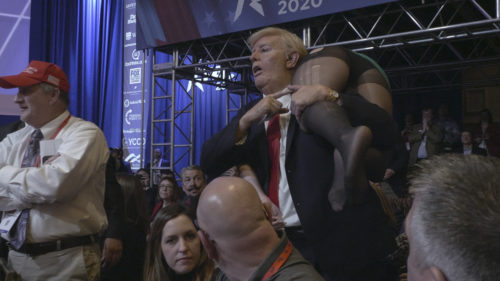 Much like Billy (Jackson Nicoll) in “Jackass Presents: Bad Grandpa” and Azamat (Ken Davitian) in “Borat: Cultural Learnings of America for Make Benefit Glorious Nation of Kazakhstan,” Sandra Jessica Parker Sagdiyev’s (Irina Novak) scene-stealing abilities amazingly compliment Cohen. Irina Novak is one of the year’s best breakthrough performers and is an absolute revelation. She steals your heart from the get-go and goes the distance delivering constant comedic laughs equaling “her father figure” with the funniest film appearance since Melissa McCarthy in “Bridesmaids.” “Borat Subsequent Moviefilm” is without a doubt one of the most magnificent mockumentaries of all time and a stellar sequel. Eric Andre’s “Bad Trip,” Tim Heidecker’s “Mister America” and  Zach Galifianakis’ “Between Two Ferns: The Movie” are other mockumentary movies in the same vein, but tonally and quality it’s definitely in the “Jackass” movie wheelhouse with “Borat Subsequent Moviefilm” closely resembling “Bad Grandpa.” You could argue it’s on bar with the first film and at times surpasses the classic comedy.

Sacha Baron Cohen continues his clever comedic antics, which we first witnessed on the “Da Ali G Show” before eventually taking it to another amazing level with “Who is America?” For those that watched the limited series (and currently only season), Sacha Baron Cohen creatively and fantastically fools unsuspecting political people with his outrageously, outlandish characters pushing people to their limits with what is acceptable behavior and at what point, can you no longer dismiss the skepticism. His excruciating endurance tests terrifically illustrate the vanity and weaknesses of his subjects with seductively savage satire. Cohen continues pushing the envelope and has truly carried the torch of Mel Brooks with exhibiting, entertaining ways of making fun of everything. Sacha Baron Cohen magnificently mocks racism, sexism, and taboo topics not for shock value, but to provide a staggering self-reflection and commentary of how our society seems to turn a blind eye with hypocrisy. There will be those absolutely offended by the movie, but what great comedy isn’t offensive? 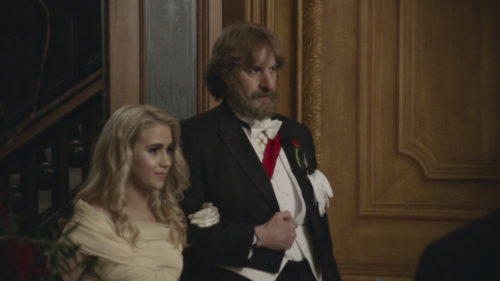 Followed by first ever live Q&A and Dance Party with Borat. To RSVP for the Borat Subsequent Moviefilm Global Watch Party, click here.