Rutger Hauer haunting from beyond the grave sounds stunning. However, remember pressure points can create a beautiful tone when properly controlling an instrument, but without the proper technique the music will be inconsistent. Sadly, such is the case with the stylized horror thriller “The Sonata.”

Upon killing himself, a prestigious composer Richard Marlowe (Rutger Hauer) has left his mansion and life’s work to his virtuoso violinist daughter Rose (Freya Tingley). Despite a non-existent relationship, Rose eagerly directs her attention to the newly inherited estate, which includes her father’s final mysterious music score with the help of her manager Charles (Simon Abkarian). Upon first glance, the stunning sonata contains curious and strange symbols making it difficult to decipher. Slowly, Rose and Charles soon discover the dark secrets of her father’s fanatical life and realize they may be triggering something scary.

Andrew Desmond directed an interesting movie, “The Sonata” which feels like a Hammer movie meets a classic 1970s gothic horror film. It’s a slow-burn genre film with the final 30 minutes intriguing, but wastes too much effort not feeling finalized and fully-flushed out. Overall, the clustered characters aren’t completely developed with one of Rutger Hauer’s final performances seemingly wasted. Maybe I expected and imagined he would have a badass violinist persona similar to his role as Lothos in “Buffy The Vampire Slayer,” but realize his role is more or less an extended-cameo.

Let me be clear, first-time feature filmmaker Andrew Desmond made a scary supernatural thriller. Unfortunately, it doesn’t quite hit the right notes to justify the pacing for “The Sonata.” The filmmakers approached the material with the right mindset, yet somehow skipped fine-tuning “The Sonata” to properly entertain the audience throughout. The film opens up with an awesome and spellbinding scary first-person death to create a killer opener. However, the “chorus” and majority of the film fret too much for concise consistency skipping notes making the audience ask, what’s missing? Imagine enjoying a good melody, but without any real substance. 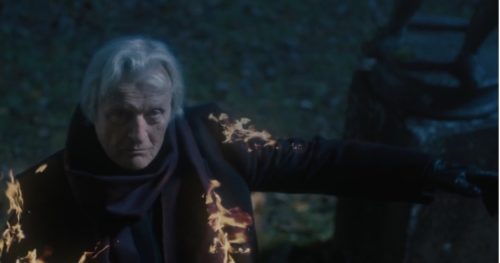 Stylistically, its reminiscent of the old Hammer films and recent gothics like “The Beguiled” and “Crimson Peak.” Those movies might be the most comparable for framing, shot styles and the elegance excused by the sets, especially with the French mansion, where the majority of the film takes place. You don’t necessarily need a perfect percentage to serenade someone, but just need to naturally find the sweet spot. “The Sonata” struggles to find its footing throughout much like a musician trying to catch up after playing too many wrong notes. Do you skip or hastily hunker down to catch up? The constant squeaks and scratches screw up the rhythm of  “The Sonata” despite a solid storyline. In the end, it maintains enough to justify watching despite the highly computerized cheesy special effects.

Overall, the film could be best described as “The Ninth Gate” meets “Crimson Peak” with a hint of “The Phantom of The Opera.” It’s phenomenally short and allows an amazing atmosphere to flourish with a cool concept. “The Sonata” is like a catchy chorus filled song. Sure, there is an element you absolutely adore, but is it something you will go out of your way to enjoy? Still, this is a fun film worth discovering like you would grab when looking for new horror movie in your local video store on Friday night.