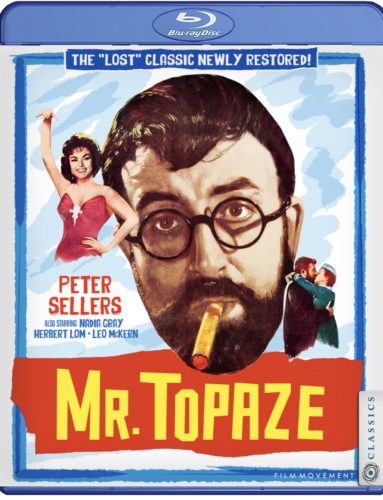 From the iconic comedian’s vault, Peter Sellers’ long lost directorial debut “Mr. Topaze” has been newly restored from a lone surviving 35mm print and arrives on Blu-ray for the very first time in North America! Peter Sellers’ amazing acting abilities are on full display and an essential experience for Sellers’ fans.

Poor, proud French schoolmaster Auguste Topaze (Peter Sellers) is a man of principle. After being fired for refusing to change a failing student’s grade, Topaze is left looking for a new career. Hoping to take advantage of his honesty, social climber Suzy Courtois (Nadia Gray) convinces her corrupt city council lover Castel Benac (Herbert Lom) to hire Topaze to oversee one of his shady business ventures. By exploiting Topaze’s terrific reputation, Benac benefits greatly, but will Topaze allow himself to be corrupted?

Considering Peter Sellers immense popularity at the time, the film failed both commercially and critically before his international stardom with “The Pink Panther.” During its original release, it took 18 months for “Mr. Topaze” then rebranded as “I Like Money” to arrive in the United States, but fared no better. Rumor has it, Peter Sellers was so angered and appalled by the reception he requested all prints to be destroyed earning a long “lost” classic moniker for decades. Fortunately, the last surviving 35mm print was rediscovered in the BFI National Archive before being digitally restored in 2K and re-released earlier this year.

Considering Sellers never officially directed another movie, “Mr. Topaze” highlights his unique sensibilities and qualities as a performer with glimpses of later Charlie Chaplin (think “Limelight”). However, Sellers’ stubbornness and bitterness robbed him of much deserved adulation he would’ve received if the film was re-released during his lifetime. Reassessing “Mr. Topaze” now is a pretty perplexing quandary, is the movie great because of Peter Sellers involvement or can you judge it on its own merit? The problem lies in the unevenness of the role as most anticipate a comedic, fun performance, but instead we’re treated to a serious Sellers, something fans would appreciate in his later years like “Being There.” Sellers’ versatility, especially when utilized with master filmmakers like Stanley Kubrick, Blake Edwards and Hal Ashby, was spellbinding. It’s surprising he didn’t want to pursue filmmaking like a Charlie Chaplin, Buster Keaton or even a Jerry Lewis. He could’ve captured a generation as a triple or dual threat, but probably Sellers the director would have difficulty wrangling in Sellers’ the performer.

As later noted in “The Life and Death of Peter Sellers” and “The Ghost of Peter Sellers,” Sellers was a tormented soul and a comedic genius at the same time. Throughout his life, Sellers constantly struggled with an identity crisis. Certainly his aversions and superstitious behavior impacted Sellers’ career. Considering his chameleon-like characterizations allowed him to maintain a considerable career, Sellers’ serious roles are usually downplayed as they didn’t possess the pizzazz one would expect.

Marcel Pagnol’s 1928 play about morality had been remade several times already by the time Peter Sellers tackled his film version. Extremely well cast with Herbert Lom (“The Pink Panther” series, “The Dead Zone,” and “Spartacus”), Nadia Gray (“La Dolce Vita”), Leo McKern (“Rumpole of the Bailey” and “Ryan’s Daughter”), Billie Whitelaw (“Hot Fuzz” and “The Omen”) and Michael Gough (“Batman,” “Sleepy Hollow,” and “The Age of Innocence”), Peter Sellers’ stumbling problem was not focusing enough on his own performance and might have been better suited with a different performer in the titular role. Not everyone can direct themselves to an Oscar-winning performance like Roberto Benigni, but the entertaining and eccentric characters we’ve grown to expect from Peter Sellers is lacking here. As the titular character, Sellers certainly conveys honesty, but other than that it’s a rather unremarkable and forgettable film performance. There are certainly flashes of Sellers’ greatness, but it’s nothing more than a blip on a rather distinguished career.

As a director, Peter Sellers lacked confidence, which clearly hindered him from making something more memorable here. Still, Sellers’ fans will rejoice seeing a different side to the legendary performer. For the Blu-ray release, there’s an amazing assortment of special features including a short film “Let’s Go Crazy” with his “Goon Show” co-star Spike Milligan, a video essay on playwright Marcel Pagnol and an interview with Abigail McKern, Leo McKern’s daughter, discussing her father’s life and career.  Film Movement Classics has once again delivered a wonderful home video release.