Home / Fanboying! / CB Heads Out To See Emilio Estevez and Martin Sheen’s The Way With A Special Q and A! Wow… That Rhymed… Autographs! Photos! and More! Breakfast Club Baby!

Oh Emilio Estevez! When I heard about this I just knew there were going to be several people who were super stoked for it! 1980’s icons are my personal favorites, so even though I couldn’t be there, I share CB’s enthusiasm! Emilio Estevez and Martin Sheen are doing a series of Q and A’s across the country to promote their indie film The Way.

CB headed over with the dashing Ms. Pinky from Pretty in Pinky fame. CB loves The Mighty Ducks… (Sigh…) and while he may hate The Breakfast Club at least he has some taste as far as 1980’s and 1990’s icons go!

Check out this full report on meeting Emilio Estevez and Martin Sheen after the jump!

Today I am writing about my awesome experience meeting legendary actors Martin Sheen and Emilio Estevez. Let me just start off by saying, this is the event that Mike mentioned in the Jim Parsons dissing everyone and Taylor Kitsch being super amazing post. I didn’t want to go because I really wanted to meet Taylor Kitsch, because he was Gambit in Wolverine: Origins and Tim Riggins from Friday Night Lights, but my friend really wanted to meet Emilio. The story goes that he didn’t get the RSVP and I did, and he needed me to go inside to meet his favorite actor ever. So after much deliberation, and much much heartache (LOL), I say “I know how important this is to you, lets go”.

Martin and Emilio are out promoting their movie “The Way” and were doing a Q & A after the movie. Emilio Estevez is one of my favorite childhood actors, and from what movies you may ask? Well, The Mighty Ducks and D2. Emilio has been in legendary films including Breakfast Club, Young Guns and Men at Work and in my friend’s defense, never out.

Martin Sheen is from a great show I enjoyed watching, The West Wing. SO I leave my chance to meet the amazing Taylor Kitsch and we head over for a chance to meet Emilio. Hoping for the best.

6:00: We arrive to the theater and register. We are joined by Pinky from Pinkylovejoy.com AKA Pretty In Pinky and Lindsay from IAMNOTASTALKER.com. (I need to thank Pinky for my amazing Paul Walker refrigerator magnet. THANKS PINKY!) 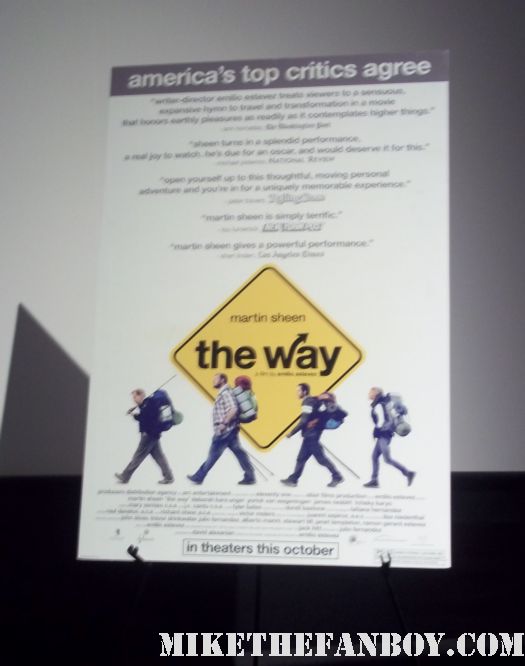 9:00: The movie ends and I can’t stop saying how great it is. It is so well directed and Martin Sheen delivers an amazing performance. 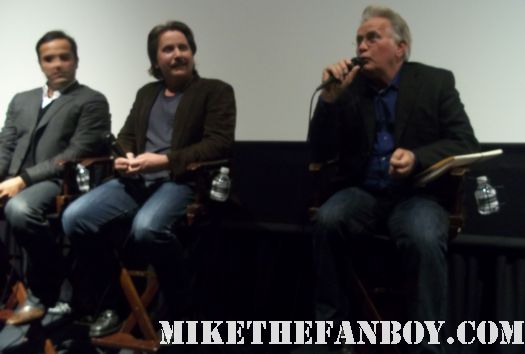 They talk about the movie and difficulty making the movie in Spain and on a budget. Martin is very engaging with the crowd and makes several jokes. 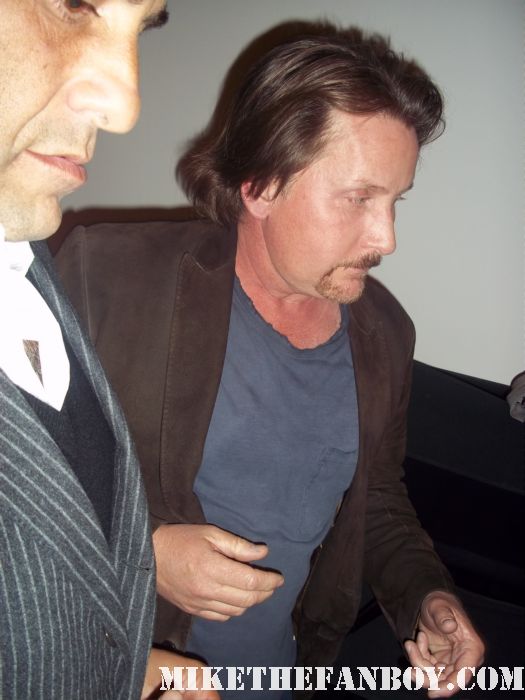 9:30: The Q & A ends and we approach Emilio and Martin who could not be any nicer. I have Emilio sign my Young Guns photo and then I take a photo with him. 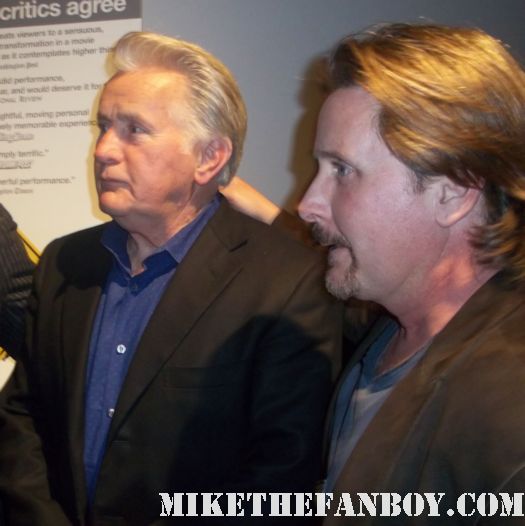 Pinky and Lindsay follow suit and get photos with Emilio too. Martin is to the side and is talking with people. When he finishes, we ask him for a photo and he obliges. 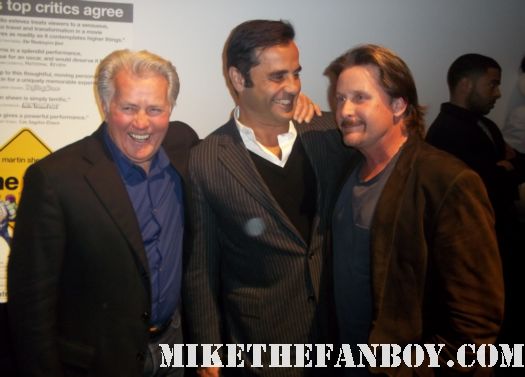 I then ask him to sign a photo with him and Emilio, and after he signs it, he says to Emilio, “Sign this Emilio” and he does. Martin Sheen is that really cool granddad we all wish we had! 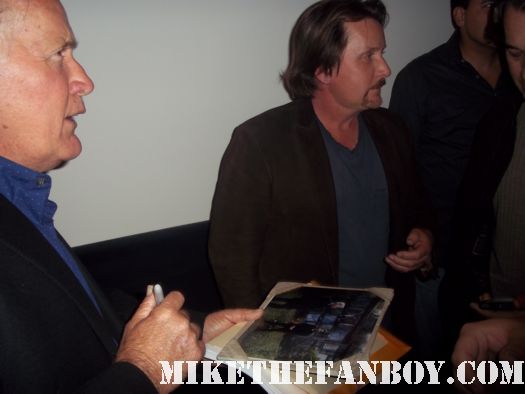 Both were great taking their time with people who came up to them. What made things better was the movie was amazing, one of the best I’ve seen this year. I recommend everyone go out and see it. Until next time, take care everyone! 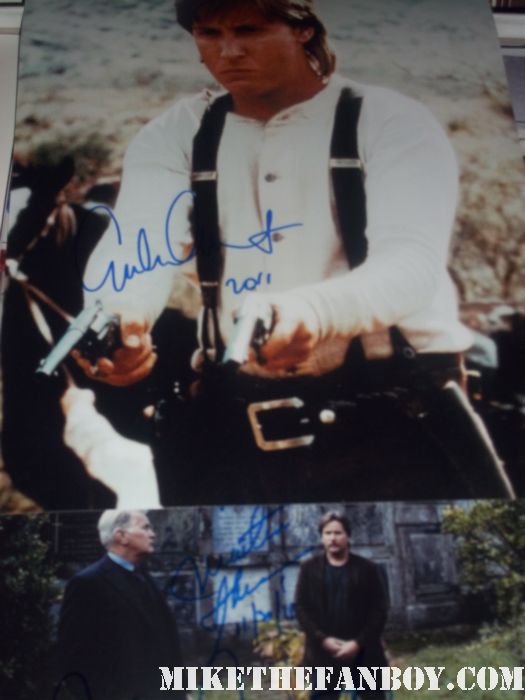 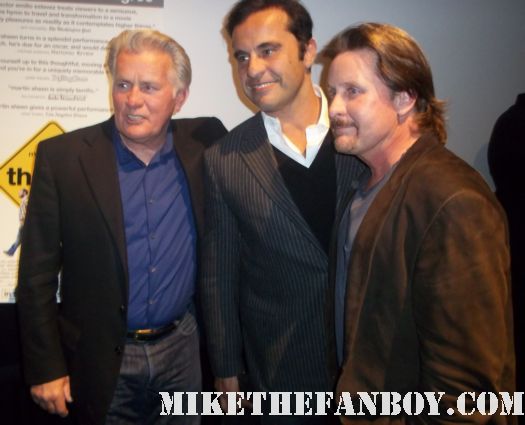