I was so going to come to this. However, as things turn out I wasn’t able to… Oh well, what can you do. There is a great Q and A roundtable with some stars of different Emmy award winning television shows on the air right now downtown Los Angeles! Since I couldn’t make it, I gave Mr. CB my Raising Hope promo items and my Six Feet Under promo poster for Peter Krause. I’ve tried in vain to get Peter Krause for years. Sigh… But I figure if anyone can get him, it’s CB!

Scotty, and Anushika are out today as well. And again thanks to Anushika for sending over a few pics!

Take it away guys!

NANANANANANA, CB, CB CB! Wow, today I am very excited because I’m going from two leading ladies from two of my favorite shows. WOO! I love Dexter and Sons of Anarchy ( SAMCRO!) so when I heard that Katey Sagal and Jennifer Carpenter where doing a Q and A I donned my bat cape and threw grappling hooks on buildings in excitement. I love, LOVE Katey, I grew up on Married with Children and Futurama and love Sons of Anarchy. Also on the Q and A was Emmy Rossum, Cloris Leachman, Peter Krause and probably more, but I really came for Katey, Jennifer and Emmy. I had one photo for Katey, the photo for Emmy from last time I met her( she didn’t sign for me) and a Dexter poster for Jennifer….some dorkus handed me his Cloris Leachman items and Six Feet Under promo….dorkus!

(Editor’s Note: The Dorkus in question entrusted you with three highly rare and valuable pieces of memorabilia. M-)

6:30: Me and Big A just arrive. We were somewhere else and luckily for us traffic, was light and we got here quickly.

6:45: Its starting to get cold, really cold…sigh

7:00: I see a tall lady walking with a group and a security guard… I run over and its Jennifer Carpenter WOOO!! I ask if she could sign my poster and she does. I then ask if I can take a photo with her and she obliges. The funny thing is security tells me, “she’s only signing one, she’s late”….and I’m the only one here….sigh 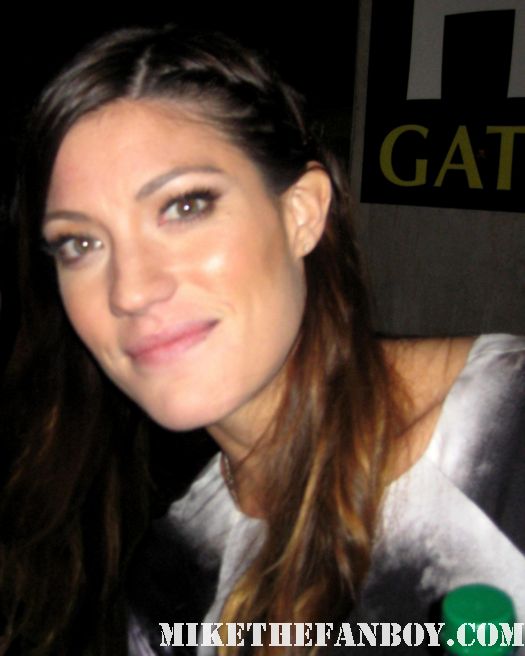 7:05 I meet up with Big A and she tells me Katey Sagal already went in and signed… DAMN IT!

7:20: Peter Krause arrives and doesn’t even look at us…hooray; I’m here for a dorkus. 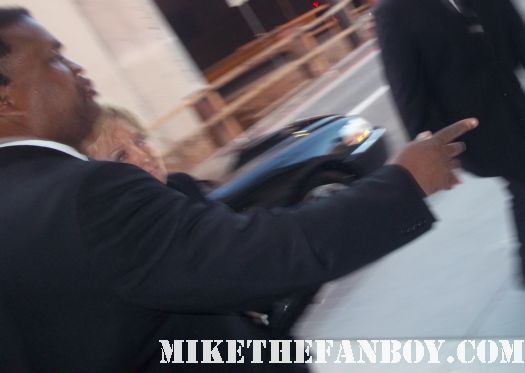 She’s late, but we ask her to sign and she says on the way out…

8:00: Its freezing…Scotty and I are trying to find a warm place to hide.

9:30: I see Cloris Leachman leave, then Katey Sagal, then Emmy Rossum, then Jennifer Carpenter… OMG they are ALL LEAVING at the same time. I have Cloris Leachman sign Mike’s promo cube and poster, Cloris Leachman smears the poster with her hand. Next she signs Scotty’s DVD cover. The second she finishes, I take the pen from her hands and get Katey Sagal to sign. 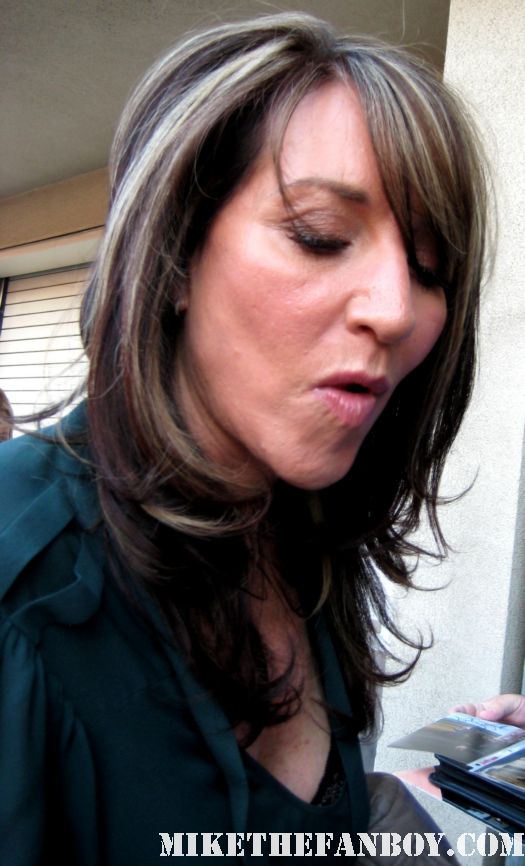 I’m sorry Scotty, but I only had one pen on me! Then take the same pen back and get Emmy Rossum. 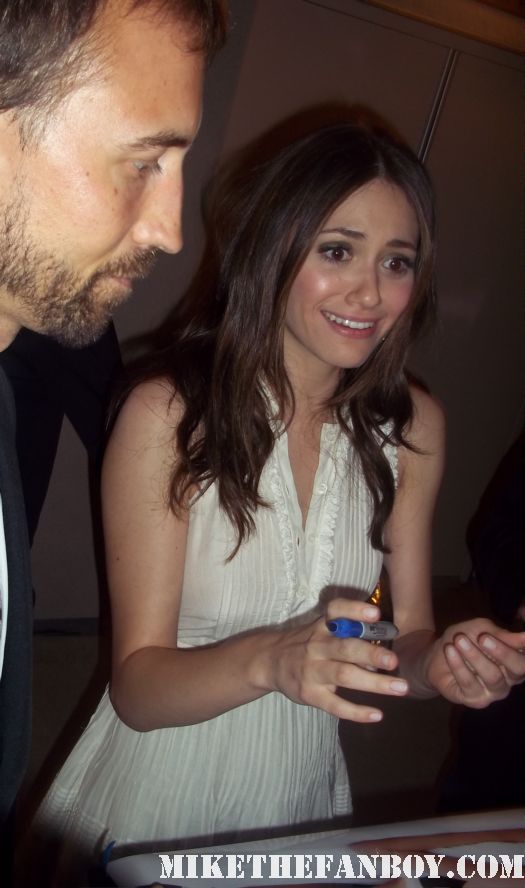 Did no one else have a pen? Really? YES! NO ONE HAD A PEN BUT ME! 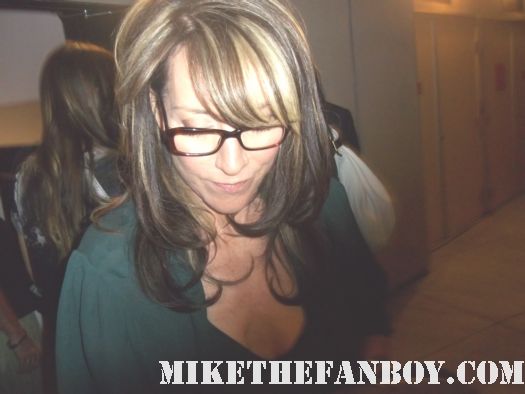 9:35: Scotty tells me, that’s Peter Krause and I whip out Mike’s Six Feet Under promo and ask him to sign it. 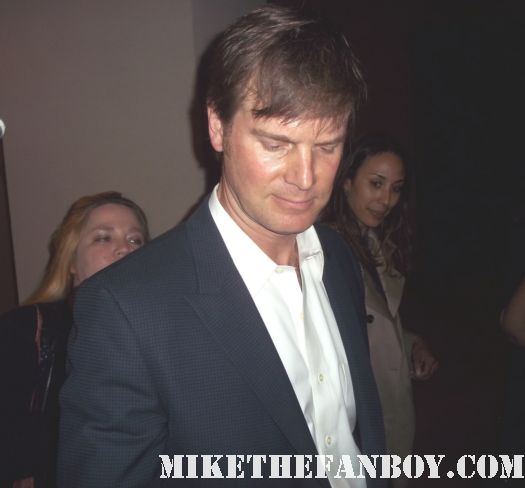 He’s so nice, gives me a great graph and asks if I have another item, I say no, just one.

(Editor’s Note: The five times I have tried for Peter Krause he has not been nice! Harrumph! M-)

9:37: Before Jennifer Carpenter leaves I ask her to sign a photo for Tara, and she personalizes it. Its cool because Big A and her where mainly here for her, but didn’t get her autograph. 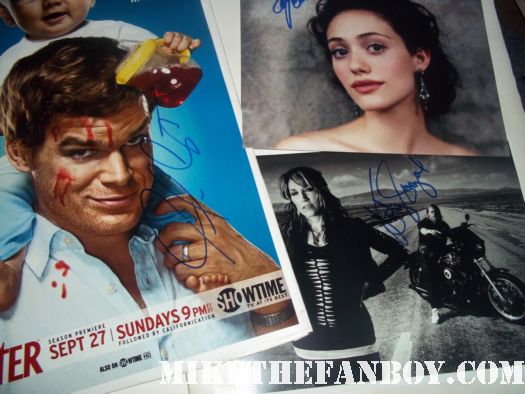 It was a fan freaking tastic night. I did start to freak out because I thought I lost Mike’s promo piece,

(Editors Note: Which CB knew would mean I would have had to dig that shallow grave and pull my wood chipper out of storage to dispose of the body. I’m not above it. M-)

But I called him to make sure he only gave me one piece. I got all three ladies I came for, and the best part is I can rub it Mike’s face I got Peter Krause…

(Editor’s Note: See the comment above about the wood chipper. M-) 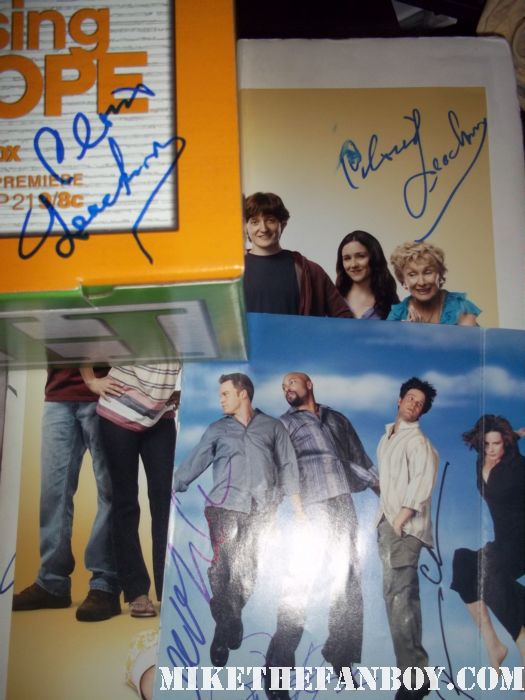