Beauty both bewilders and attracts us in many fascinating ways whether or not we acknowledge it. “Chained For Life” is an aesthetically ambitious and awe-inspiring inventive movie exploring our fascination with beauty brilliantly.

“Chained For Life” tells a behind the scenes story of making a movie with unusual characters. Mabel (Jess Weixler) is an actress struggling with her horror role in the English debut of eccentric European auteur Herr Director (Charlie Korsmo), who supposedly grew up with the circus. The director’s devilishly art-horror film focuses on Mabel’s character, a blind German woman, seeking radical treatment by a doctor, played by Max (Stephen Plunkett). The doctor’s extreme experiments are attempting to “eradicate aberrations” and improve the lives of his unusual, unique set of patients. 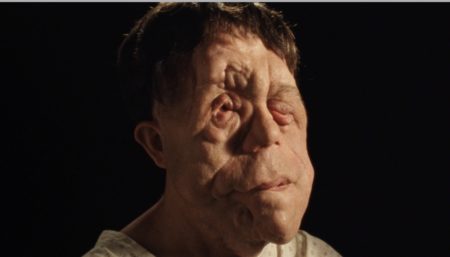 Most of the cast, especially Mabel and Max, are anxiously and eagerly awaiting the arrival of their curious co-stars consisting primarily of sideshow performers. Amongst the interesting individuals is Rosenthal (Adam Pierson), who suffers from facial deformities causing a protruding and misshapen oversized head. Despite this, Rosenthal’s genuine, gentle demeanor attracts the attention of Mabel both on and off-screen. Considering the obvious obstructions facing the cast, can this movie be finished without being seen as exploitative? 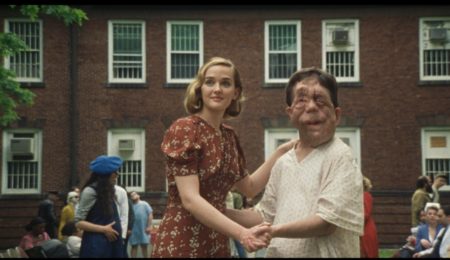 “Chained For Life” opens up with a quote from highly-regarded film critic Pauline Kael commenting on why we want our entertainers attractive and poses the question, “Why should we be deprived of beauty?” The unusual, unique characteristics of the supporting cast proves both beautiful and bold for the casting choices without overwhelming you as exploitative. The impressive lineup with 7’7” Daniel Gilchrist (Demby), twins Miranda & Rebecca Gruss (Miriam & Eva), William Huntley (Aristotle), Alison Midstokke (Stella), Diana Tenney (Nora), Tiffany Manning (Phrosa), and Sammy Mena (Brutto) plus Adam Pierson raise provocative questions about the standards of beauty in Aaron Schimberg’s sensational, surrealist movie.

As one character points out, “If everything was ideal, nothing would be ideal,” but fortunately the brilliant casting choices don’t come across as exploitative. Throughout the film various characters comment on questionable or rather infamous “casting scandals” throughout film history, most notably Orson Welles in “Othello” and “Touch of Evil.” Considering the eccentricities of Herr Director, it allows audience members to wrap your mind around this impressive lineup of featured performers and appreciate the visual medium of our fascination with appearance. The production design, specifically the color scheme, certainly captures our mind and pulls at our heart. 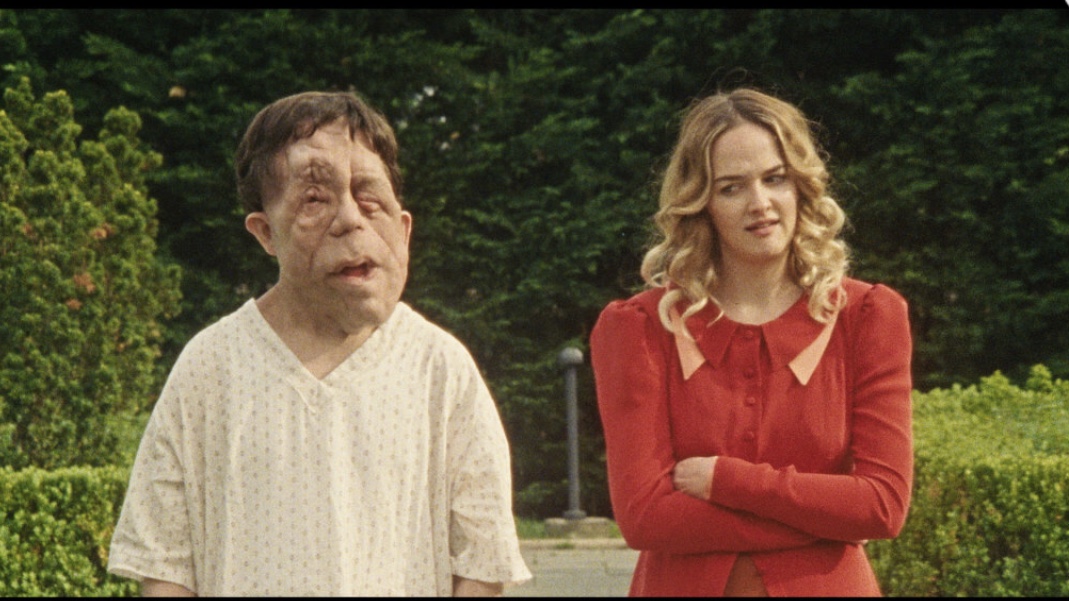 The color palette protrudes and almost lunges out with its prominent usage of yellow and red. Considering tope is supposedly soothing, the other yellow layers create cheerful energy and expose the emotional strength of the characters both in front and behind the camera. The enlightened communication creates an almost intelligent and joyful experience despite “distorted imagery” presented in front of us. However, at the same time the duality of irrationality, jealousy, anxiety and fear causes increased mental activity and awareness to create an almost ideal yellow yin & yang effect with analyzing beauty standards.

Jess Weixler is almost always dressed in red realistically showing strength, perseverance and passion towards all of her co-stars with the exception of Max. Since red is minimally presented, almost entirely with the character of Mabel, it also allows audience members to experience the caution and fear when dealing with the unknown as Mabel interacts with her new friends. Initially, Mabel has difficulty looking Rosenthal in the eyes, which is a cinematically cute way of presenting how we want to look at the extraordinary, but not connect on a meaningful way. However, humor propels their interaction and allows Mabel to drop her guard generating genuine curiosity to learn more about her new friend. Max on the other hand overcompensates commenting Rosenthal is “gifted” and delivers a barrage of compliments confusing comradery with masked insecurity and narcissism representing the awkwardness we endure when we’re uncomfortable. Often times we make an extraordinary effort to make an uneasy situation comfortable. Sadly, Max’s imprudent attempts prove foolish and that’s pure jealousy as both the character Rosenthal & actor Adam Pearson truly steal the movie. Without a doubt, Pearson can carry a movie and be a strong supporting actor. 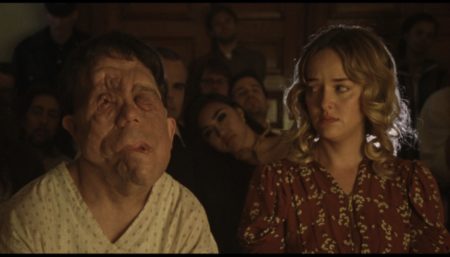 Jess Weixler’s wonderful performance perfectly complements Pearson’s pitch-perfect Rosenthal. Often times, society states we’re not “beautiful enough” because of the unrealistic notions of beauty relentlessly shoved down our throats through various visual mediums. Through this organic, oddball magnificent movie we’re able to appreciate, albeit cliché saying, “beauty is only skin deep.” Aaron Schimberg definitely delivers one of the most original entertaining movies of the year. I can’t wait to see this movie again!

Mabel’s film character is “blind in the movie,” but believes she sees beauty all around stating to Rosenthal “I see your beauty and if others don’t, they’re blind.” Some individuals might have the right look, but you can always tell how beautiful someone is by their heart and actions. “Chained For Life” is an exceptionally entertaining movie filled with humorous heart and almost feels like a hybrid of David Lynch lovingly intertwined with Tod Browning’s “Freaks.” Throughout the film there are nuggets like the iconic “One of us!” phrase repeated and an image of John Merrick (a.k.a. The Elephant Man) referenced creating a deeply funny film addressing appearances head on without hesitation. The provocative perceptions of beauty and quintessential questions raised resonate immediately forcing us to realize the blindness we readily accept as the status quo, instead of abnormal. We’re certainly blind to the truth.

Aaron Schimberg’s contemplative characters carefully address and accept the standards of beauty are drastically different for everyone. Nobody is perfect, so why sweat the small stuff? “Chained For Life” is one of the most must see movies of the year and a Top 10 contender. You haven’t seen anything yet.