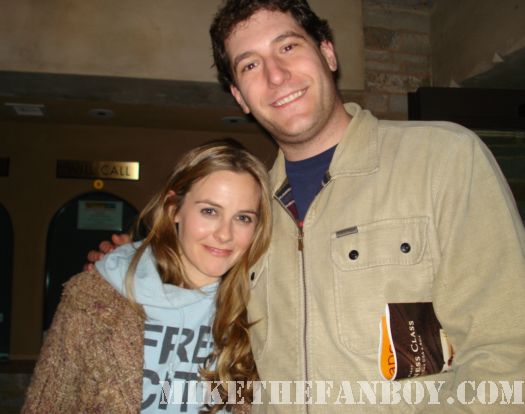 Today is Erica’s last day in Los Angeles, at least for this month, and consequently this is our last excursion out and about. Tonight we are trying to get Cher… I mean Alicia Silverstone (who of course was Cher in Clueless…Hello! As if!) who I personally love to death. Clueless is a personal favorite of mine, and I’ve been meaning to try and get her for a while now. She is in play called Time Stands Still at the Geffen Theatre in Westwood, and since Erica is the theatre expert (ask her about any play in the past couple of decades, I dare you!) I figure this will be a fun outing for us.

9:22 p.m. – We just arrived in Westwood. Shockingly, we found decent parking for a friday evening. Erica is the theatre master so I am leaving everything in he hands this evening. We have heard from multiple sources that Alicia is very shy, and not being especially friendly after her show so I don’t have high hopes for this one.

9:31 p.m. – Erica went to the box office and got the skinny on the Vall party, I mean play (I plan on throwing as many Clueless references as I can into this report so bear with me) so we know it ends shortly after 10.

9:33 p.m. – We’re both getting a tad bit famished and since standing for forty minutes is hardly aerobically effective we’re heading over to the BK Lounge. Plus, I doubt we’ve worked off the calories in a stick of Carefree gum. 😉

9:39 p.m – Erica was not prepared for this signing so I gave her my Clueless DVD insert and I have this kick ass UK Quad mini poster. We were also warned that Alicia doesn’t sign in blue and hates collectors/paparazzi. Again, we are not feeling terribly optomistic about tonight, but I told Erica she needs to show a little skin, this reminds people of being naked, and then they think of sex which makes them happy. (okay, that was more of a paraphrase but you get the idea)

9:44 p.m. – We tried those mini slider burgers for a snack, and I’ll be damned… they were not half bad… Ah, the BK lounge… I really hope Alicia does not act like an evil troll from the math department…

9:53 p.m. – We’re in front of the Geffen now. It is a very cute theatre and if anyone out there is in Los Angeles you should really check it out if you like theatre.

9:59 p.m. – I’m starting to get nervous. I know this is wierd, cause I have had such wonderful opportunities with such huge stars, but meeting someone who played such an iconic character to me is an even bigger thrill. Like if I met Sarah Michelle Gellar, I like her, but I LOVE Buffy, and meeting SMG is the closest thing I could get to meeting Buffy considering Buffy is just a character. You dig?

10:11 p.m. – Oh, the play is over and here come the patrons exiting the theatre. We are really the only people waiting for Alicia to come out, and I always tend to hang back and let Erica do the approaching since she is smaller and therefore less of a giant than myself. Some of these actresses are so small I feel like I might step on them…

10:22 p.m. – And there she is, Erica really goes for it, and just kind of walks over to her. I trail behind. She approaches Alicia with caution because we have heard she is quite skiddish like I said. They talked for a few minutes, and Erica asks her if the play is going to go to Broadway. (Erica said it way more technical than I ever could with all these fancy names and Lord knows I can’t remember exactly what her quote was, I put this in here so I don’t get an email with the exact thing she said later, even though I know I still will… whew…) Alicia said they don’t know yet, and then Erica asks her if she would mind signing her Clueless insert. Alicia goes to sign it, and then I come up. She really looks me over and is kind of very wary of me. I pulled out my poster, and she really has her guard up. I ask her if she would mind signing my poster, and she is about to sign it, when I ask her if she would mind signing it in purple (I LOVE PAINT PENS!) was said okay, and then I ask her to make it out to Mike. When I asked her to make it out to me her whole demeanor changed. She asked me if I was Mike, and I was like… YES! and then I dorked out… I started babbaling about how I had this poster for years, and I really wanted to get it signed, and blah blah blah… Yep, I’m a dork. After she signed my poster, at the risk of getting brutally rebuffed, I asked her for a picture. She paused and then said sure. To my suprise, she put her arm around me and really kinda snuggled up. I was in heaven! She was very sweet, and I’m really happy cause I have wanted her for a long time. This was a perfect capper to a fun week with Erica. Now she has to come by next month cause there might be a Marcia Cross sighting and Erica’s good luck! 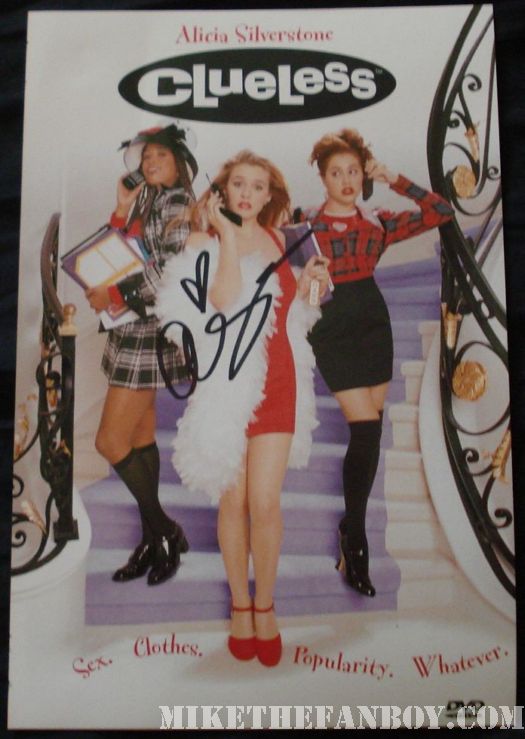 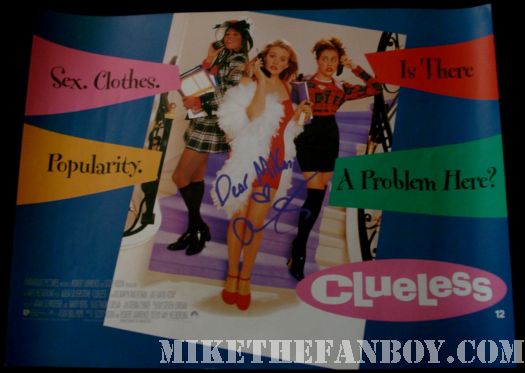 Originally Published as Mike Gets Around by Mike Sametz on www.mishmashmagazine.com