I have to tell you, it’s rare when I hear anyone complain about meeting Gerard Butler. I mean, he’s so cool to his fans, it’s just crazy. I know I posted by recent experience with Gerry and now Suddenly Susan is sharing her moment with the 300 star.

She went to a different talk show taping and was in a mob of 40 plus people. you would think that would be a deterrent but it worked out great for her! Score!

Check out Suddenly Susan’s report after the jump!

Decisions, decisions. The life of an autograph enthusiast. I was faced with a tough choice recently – go for Gerard Butler for a third time or Nikolaj Coster-Waldau for the first time. It was down to the wire and I still hadn’t made up my mind. So, I picked Gerry and went to the location, as scheduled, and to my surprise, there were only 4 people waiting. Hmmm, he must have cancelled, right? But, no, he hadn’t. This is odd. Quite odd. Normally when Gerry is involved, there are a least 300+ people waiting. Well, that’s an exaggeration, but I needed to mention 300 in here somewhere.

Sure enough, when it was almost time for Gerry to leave, we had climbed to about 20 people. Still not too bad. Then the audience let out and we went to 40+ in a matter of seconds. It didn’t help that one of the fans from the original group had a life size, shirtless, cardboard cut out of Gerry. I kid you not. 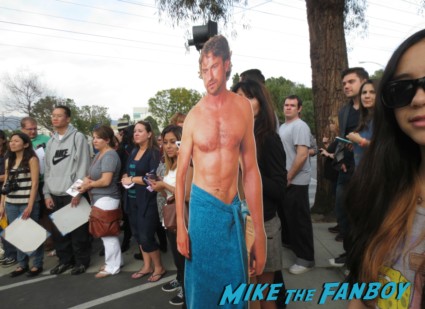 Her husband had it made for her for Christmas. He must be the most secure and understanding man on the planet. The other fans/dealers were annoyed that she had brought it, but, I do understand where she was coming from – that’s the one thing she wanted signed, so tough toe nails on the rest of us.

For some still unbeknownst reason, security decided to force us to the sidewalk, off of the property. We had arranged ourselves in a single file line, behind the barricades to make things go smoothly and show Gerry how orderly, and therefore worthy of him stopping, we were. I even got mouthy with a few people that squeezed in and told them where the line started and where they could go… which was the end of line.

So now, we’re all in a massive cluster on the sidewalk with no one wanting to give up their spot. People who were there first were now squeezed in back, etc. I stood my ground and ended up the second person on the left in the first row of the cluster. No way in hell is he going to stop when he sees this madness. Or so I thought. Then a sharp dressed gentleman come over to tell us “this is going to happen” (his exact words, I swear) and that Gerry would sign one thing or take a photo. Once you had your one thing, to please step out and let the next person go.

I was quite surprised. Just a few minutes later a dark SUV slowly pulls up and the man himself emerges. He
looked very tan and very tired (he was back and forth from LA to NY in 2 days), but still super duper handsome. 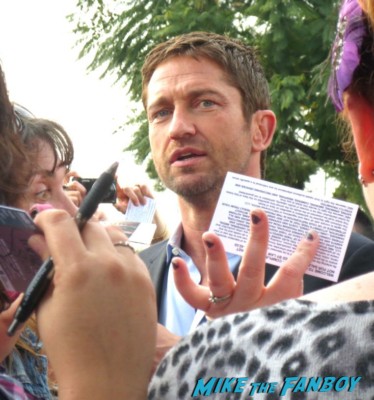 Too my utter amazement, there was no pushing, no shouting, no shoving. Where I am??? Gerry went straight to the cut out of himself and commented that he felt a “little gay because I kind of wanted to kiss it.” 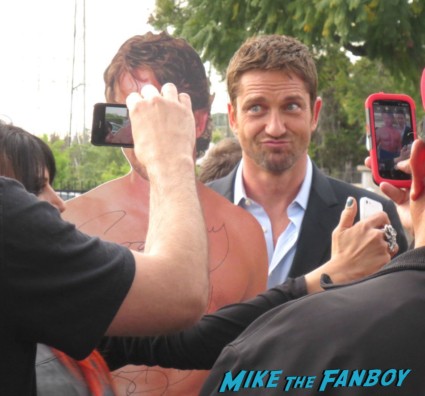 Then he stepped back to the first person and said, “ok, what are we doing?” The young guy took a photo. The next girl had him sign a photo. Then it was my turn. Of course, some D-bag behind me plops their photo on my head. Thanks dick. I may be short, but I am not a table top. Gerry signs it, but I see the same guy who gave us the “this is going to happen” schpeal tell the people behind me to stop handing things over and just wait. I’m up next. I ask him to sign my photo to Susan (you all know my M.O. by now). He glares up and for a second, I think he’s going to yell at me, but he just starts writing. Susan kisses Gerard Butler. That’s right – kisses. I knew he loved me.

I moved out of the way and that was that. Or was it? I walked around the back to get some photos for my write up and to share in the excitement of the tourists who were able to meet Gerard Butler. 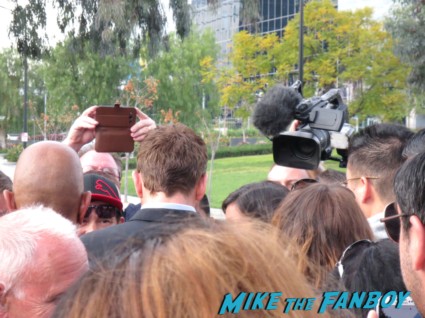 How awesome for them. Imagine coming to Hollywood from say Alabama or Michigan and you score tickets to a talk show where Gerry was added pretty last minute as a guest. Then, you get a chance to meet him afterwards! What a thrill. 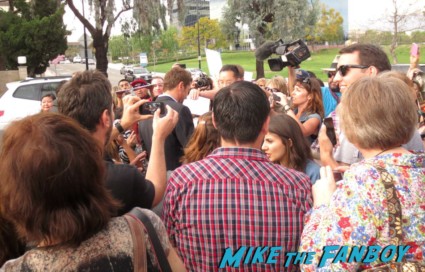 Suddenly, this woman shoves her camera at me and asks me to take a photo. I obliged. Then she says, “now her” and Gerry says, “ok, last one”. I quickly gave my camera to a girl I know from these “outings” and she snapped a great photo for me!!! 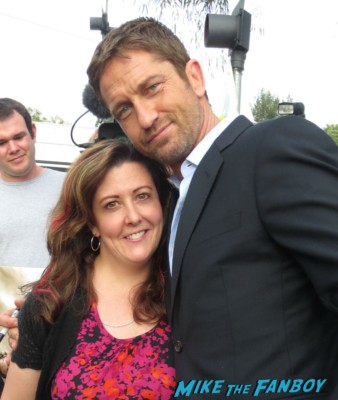 Score on the unintentional double dip! I got a lovely, personalized autograph and an excellent photo op with Gerard Butler. Best… decision… ever. 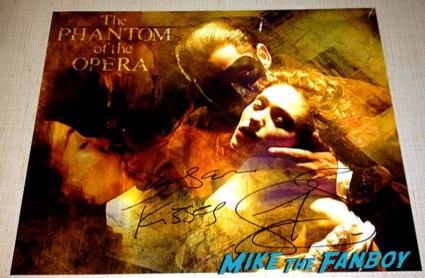