Plus, if Zombies and Strippers are combined with a dash of Nazis… Well… Color me one happy Fanboy!
Jack checked out a recent screening of The Lords Of Salem and was able to meet the Zombie-master himself Rob Zombie and Sheri Moon Zombie!

Nazis, strippers and zombies, oh my! This week’s edition of Cult Classic Corner comes courtesy of Rob Zombie with his highly underrated and under watched adult cartoon “The Haunted World of El Superbeasto.” Based on his comic book series, Rob Zombie directed an exploitation horror comedy filled with crazy scenarios that will leave you wanting more. 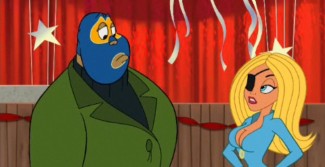 The titular “El Superbeasto” (Tom Pappa) is a suave filmmaker/former masked wrestler, who gets himself constantly in trouble and usually needs his attractive, secret agent sister Suzi-X (Sheri Moon Zombie) to rescue him. Together, the two of them need to fight Nazi zombies and stop Dr. Satan (Paul Giamatti) from marrying the vulgar stripper Velvet Von Black (Rosario Dawson), who possesses “the mark of the beast” on her body, and their unholy union may destroy the world! 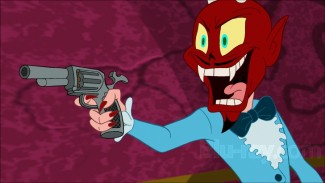 From one ridiculous scene to the next, this is exactly the kind of film you would expect from Rob Zombie in animated form. Loaded with tons of film and historical references, “The Haunted World of El Superbeasto” is a great film to enjoy for 80 minutes. Plus the voice cast is amazing besides the aforementioned actors: Tom Kenny (“SpongeBob”), Brian Posehn, Ken Foree, Geoffrey Lewis, Rob Paulsen (Pinky from “Pinky and the Brain”), Danny Trejo, John DiMaggio (Bender from “Futurama”), Jess Harnell (Wakko Warner from the “Animaniacs”) and Tura Satana. Also Zombie regulars Sid Haig and Bill Moseley reprise their famous film roles Captain Spaulding and Otis B. Driftwood respectively. If you consider yourself a horror fan, then this is a film you should discover! 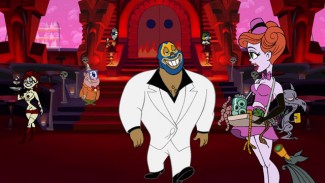 About a week ago I met writer/director Rob Zombie and Sheri Moon Zombie at a Q&A. Although the movie they were promoting was horrendous, “Lords of Salem,” the Q&A was pretty entertaining. 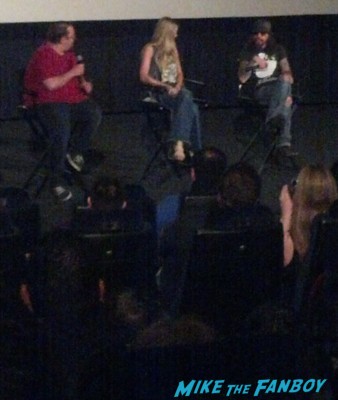 Both were quite receptive with fans and for the most part gave engaging responses. The highlight of the night was when one fan made the observation, “It seems in every movie you cast someone who looks like you or there’s a character dressed exactly like you.” Rob even agreed this was true, although “purely unintentional.” 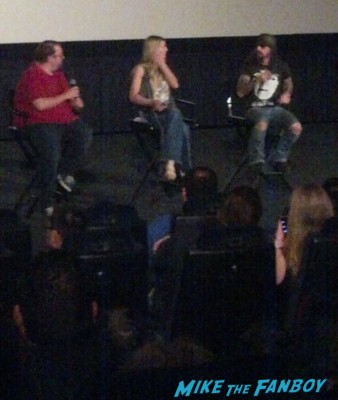 After the Q&A ended, a barrage of security blocked Rob Zombie and Sheri Moon Zombie with very few people being able to approach them. Eventually security created a perimeter blocking anyone from leaving the theater, including my friends and I. Thanks stadium seating! Sheri signed a handful of autographs (maybe one or two) before taking off. Everyone surrounded Rob that was able to get to him.

Suddenly, Sheri is walking towards the back past the stadium seating making a beeline for the exit. Realizing I might have a chance I extend my arm over the handrail and politely ask, “Sheri, do you mind signing an autograph?” Sheri then looks up, smiles and signs my “Devil’s Rejects” DVD before taking off. Absolutely no one wanted her autograph that night despite her being the star of all Rob’s films. I really lucked out and was one of the only people who managed to get her autograph. 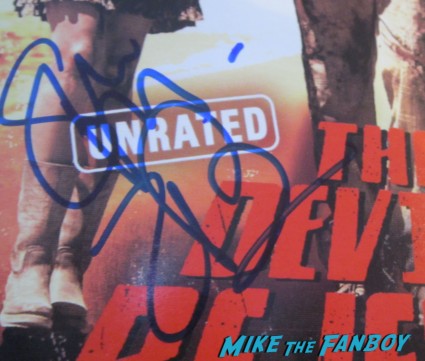 Soon I see Rob slowly making his way with security and he’s stopping for fans, but moving quickly (however not in a rushed manner) leaving the same way Sheri did. He’s physically stopping and signing an item for fans that ask, but continues moving forward with each request. He’s about to leave and I grab his attention with my “The Haunted World of El Superbeasto” DVD. Rob then grabs and signs my DVD giving me a great, clear “Zombie” autograph. After a bad experience at a convention with Rob (the infamous creation entertainment Weekend of Horrors), this definitely changed my opinion of him. I’m so happy to have finally received two cool autographs from two really awesome horror stars. Until the next time, happy autograph hunting! 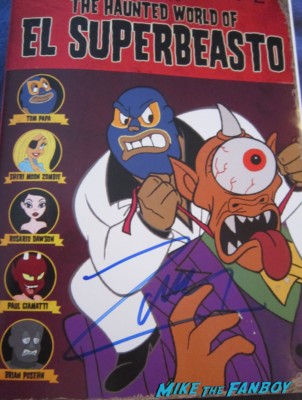