There’s nothing like an all male pop group to get teen girls hearts a pumping. LOL… I’ve seen it first hand. The girls go wild! lol… Daniel headed out to Radio 1 and wanted to meet… The Wanted… Get it… He wanted to meet The Wanted… I’m slap happy today.

Daniel grabbed a CD… Remember those? lol… fro HMV… I remember record stores here in the States and miss them! Sigh… I’m tangenting all over the place. lol… Anyway, Daniel grabbed his cd and headed out to meet the guys from The Wanted!

Hey guys, sorry this one’s a bit late (from November) but surely its better late than never! I thought that I would share my experience of meeting The Wanted, who sang songs such as ‘Glad You Came’, ‘Chasing the Sun’ and ‘I Found You’. I saw that they were advertised to be on the Top 40 singles chart show in London at Radio 1. I thought, why not go along and meet them, might be a lot of girls but surely worth it!

Here we go, I met the Liverpool football team, or soccer to you! 🙂 in the morning, where I managed to get most of the team, before spending a day chilling out in London and going for lunch in the afternoon before The Wanted were scheduled to be on Radio 1. Since I knew where The Wanted were going to be, I thought I’d pick up one of their latest singles from HMV (might no longer to be able to shop there as they are going bankrupt!). I decided to purchase the CD and then headed towards Oxford Circus to wait outside the radio station.

The show started around 4pm but I decided to get there around 6pm, as I knew that there were other guests and stuff to be done before they came out at the end. Wow, there’s a lot of crazy girls here, around 30 or so, I must be the only boy who is waiting, how embarrassing lol! Anyway, I don’t get embarrassed on who I meet, if I think they are worth getting, then I will meet them! Anyway, whilst I’m there, I meet singers Misha B and Angel.

First out was Siva, who spent around 10 mins speaking to girls, taking pictures and discussing their twitter accounts. Damn, these fan girls take up most of the time, grrrr. Anyway, he finally gets to me and signs my CD before he’s rushed on into the car.

Next out was Nathan, who also went over to all the girls and done the same. Grrr its cold, I wish they would hurry up! Finally, Nathan gets down to me and signs my CD, before he’s also rushed out.

Out next was Tom, done the same things with the girls and also took his time! Also managed to get Tom to sign my CD and he rushes off!

Now, out comes Max, he’s with all the girls as well and took a fair bit of time before he gets to me. However, he signs my CD and I manage a picture with him before he heads off. 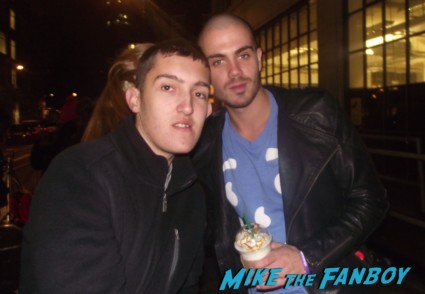 Lastly, out comes Jay, he also takes his time speaking to a few of the girls. Luckily I’m one of the last to get him to complete my CD before he’s rushed off by security!

I have to say, that The Wanted were a very nice group to meet, I’m glad that they’ve been doing really world in the music world and I just wished their security weren’t so over the top! But if you have the chance to meet them. then go for it!

Until we meet again…. 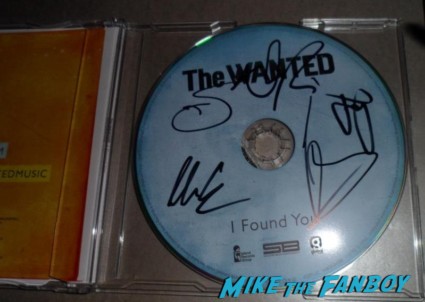