Man, I have to tell ya, I love Dan Aykroyd! It’s like Jack says in this here article… I was raised on the comedy legends of the 1980s, like Dan, Chevy Chase, Shelley Long, Bill Murray, etc… So meeting them has been a priority for me.

In this weeks Cult Classic Corner Jack talks about meeting the iconic Dan Aykroyd and his love of Trading Places!

Check out the full report below!

It all started with a bet. Growing up, my parents introduced me to a wide assortment of actors ranging from The Three Stooges to Clint Eastwood to Eddie Murphy to Katherine Hepburn. However, it was my parent’s fondness for comedy that made the greatest impression.

Growing up, Chevy Chase, Bill Murray, Eddie Murphy, Dan Aykroyd, John Belushi and countless others ruled my youth. As a matter of fact, almost every major SNL cast member from 1975-1995 had a huge impact on me, particularly cast members from the first decade. While most children would watch “Inspector Gadget,” “Care Bears” or whatever children’s programming was on, watching films like “Beverly Hills Cop,” “The Blues Brothers,” “Caddyshack” and “Trading Places” was tradition. My mom in particular really enjoyed Eddie Murphy and Dan Aykroyd, which is one of the things we share in common. 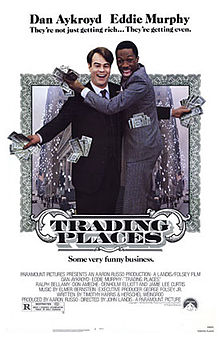 Now I can’t remember the first time I saw it, but “Trading Places” is one of those classic comedies that almost never were. Originally intended to be a comedic vehicle for Gene Wilder and Richard Pryor, the film took on new life when Eddie Murphy was hired. Not wanting to be another “Pryor,” Eddie Murphy suggested removing Gene Wilder and Dan Aykroyd was eventually cast. Dealing with the controversy surrounding “The Twilight Zone,” John Landis immediately accepted the offer to direct “Trading Places” primarily because “it was out of (Hollywood).” Once Landis was on board, he cast Don Ameche (which resurrected his career and eventually led to an Academy Award) and Ralph Bellamy as the Duke Brothers. 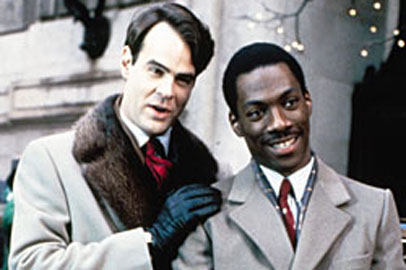 Louis Winthorpe III (Aykroyd) is a wealthy stock broker who has it all: a butler named Coleman (Denholm Elliott), a gorgeous fiancé (played by model Kristin Holby) and works for one of Philadelphia’s best commodities brokerage firms, Duke & Duke. One day while leaving The Heritage Club, Winthorpe accuses hustler Billy Ray Valentine of trying to steal the Duke & Duke payroll when they accidentally bump into each other outside. The incident leads to Valentine’ arrest and the Duke’s conceive an experiment to have Winthorpe and Valentine switch places. Would someone from a wealthy background turn to a life of crime if everything they have ever known is taken away and would a criminal succeed if put into a life of luxury? As a result, Randolph and Mortimer Duke create a “Prince and the Pauper” situation. As soon as Paul Gleason and Jamie Lee Curtis enter the film, comedy ensues. 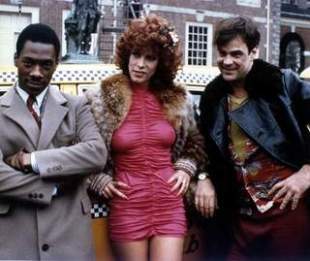 Years ago I met John Landis at a book signing and said I was excited to see him at a double feature screening of “The Three Amigos” and “Trading Places.” Even though he felt hesitant people would show up, he was pleasantly surprised when nearly a sold-out audience greeted him, despite “showing two films constantly seen on TV for free” (His words, not mine).  However, I want to talk about meeting Dan Aykroyd at the Wine House in West Los Angeles while promoting his vodka, Crystal Head.

This is one of the very few times I genuinely wanted to meet someone because of a product. For a while, purchasing Crystal Head vodka was pretty difficult and I used the vodka as a great excuse to attend the bottle signing. My friend Casey had attended one of the other LA area signings and informed me Aykroyd was generous signing multiple autographs and taking pictures. This was amazing to hear.

On the day of the event, my friend Chris and I attended the Wine House and were pleasantly surprised no one was here (90 minutes before the event). We were like the second people here and started chatting with the person in front of us. Slowly, people started showing up and soon an “Ecto 1” replica car began parked alongside the street. As the time grew closer, Aykroyd had yet to arrive and less than a 100 people were here. 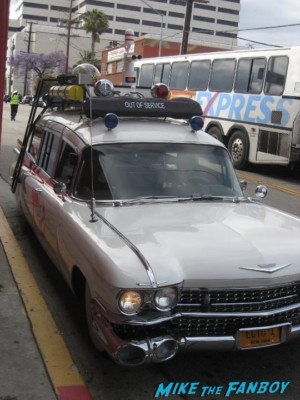 Suddenly, Aykroyd pulled up in his own truck. Winthorpe doesn’t need Coleman to drive himself? Wow, that’s awesome! 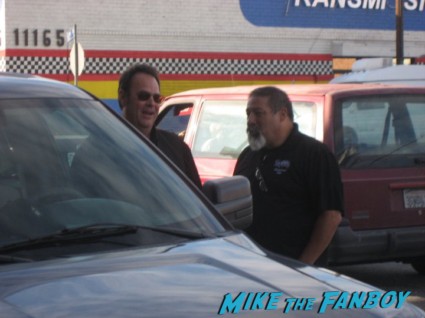 Upon his arrival, he asked the Ecto 1 owner if they wanted him to sign the car and I graciously handed him a sharpie. After he took it, he reassured me they would have plenty of Sharpies for the signing and went on his way. When we came in, I put my friend’s Ghostbusters DVD on top since he drove us, but all I wanted was at least one autograph and a picture. 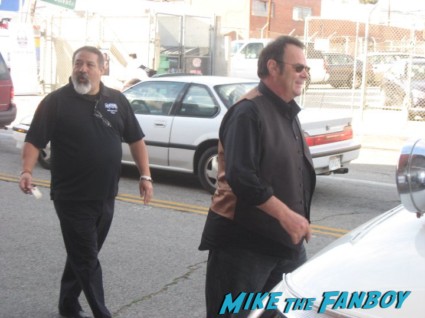 As I placed my items down, Aykroyd realized Chris was starting to take pictures and said, “Let’s pose for your friend.” I turned around and we both leaned over the table for a cool shot. 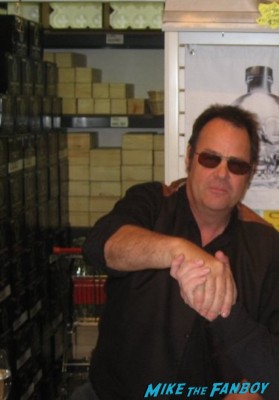 After signing his Crystal Head vodka, he then signed my copy of Trading Places, A Briefcase Full of Blues album and The Great Outdoors. 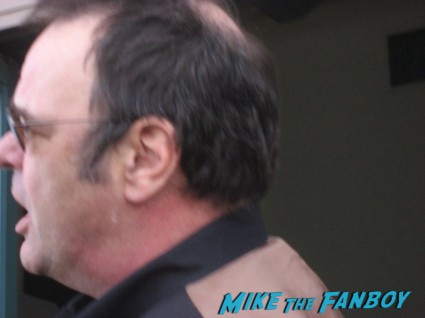 As I was getting ready to leave, the person assisting Aykroyd attempted to hand me my receipt back, but was intercepted by Jake Elwood himself. He then signed my receipt and personally handed it back to me. 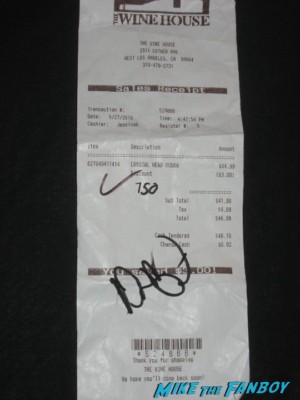 Overall, I walked away with six autographs (including my friends Ghostbusters DVD) and a picture plus a few free samples of Crystal Head. For $46.08, this trip was definitely well worth it. 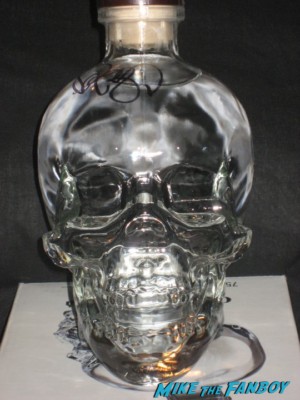 If you have a chance to meet Dan Aykroyd on his promotional tour go out and meet him. Besides him being super friendly, Crystal Head is amazing vodka you can pick up for around $40 and it comes in a cool skull bottle. Until next time, happy hunting! 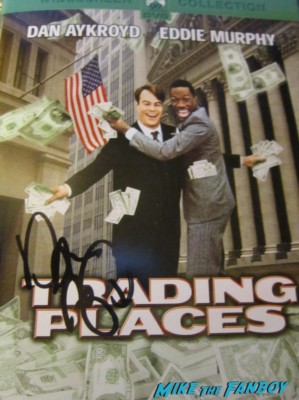