Paul headed down for the first in a set of two shows the band was doing as sort of a farewell of sorts. This year we lost two members of the pioneer new wave rock band and this was a great way to honor them and the band as well.

Paul is a huge fan, and had an amazing time!

Check out his recap of both nights and meeting the band as well!

Alright, spuds, time to check out Devo’s show at the Wiltern Theater! I arrived around 11am after receiving a call from my friend who’s been camped out there since 8am (can you say Tom Cruise flashback?!!). Now, I’m a hardcore Devo fan since the late ’90s and have seen them over ten times since 2005, so I really needed to see them on their final tour (since two band members, Alan and Bob, passed away this past year).

Soon the devotees started to arrive and it’s a big reunion – some of them even came over from London to see the show! While we waited, Devo Obsesso, the band’s archivist and all around good guy, made his appearance and more people showed up. 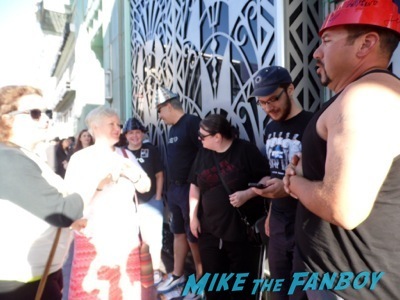 Around 6:45pm the staff let everyone know they could skip the line for another $15 and about 10-20 people ran up to do that. I knew I was VIP either way, so after they opened the doors, I got my credentials and went to the pit area.

I got to brag to my fellow devotees that they just wasted $15 (but since I spent $30 on a tour shirt, it was pretty much even). I ran into my buddy, Ness, who drew a picture of General Boy to have Mark sign (which made no sense to me, but whatever).

I put it with my stuff I’d planned to try and get signed anyway. The show started with Mark Mothersbaugh walking out on stage and reading the Louisville Times from 1974. He said, in a tracheotomy voice, “I see Nixon is resigning, LBJ is taking over.” The band started off by playing “Mechanical Man” after throwing out gum cigarettes to the crowd (did I mention this set featured only songs from 1954-1977?). 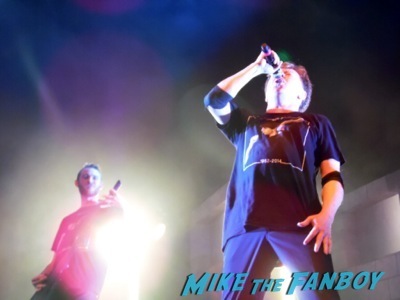 The band went through an amazing set, including hits like “Bamboo Bimbo,” “Jocko Homo,” “Uncontrollable Urge,” and “Be Stiff,” 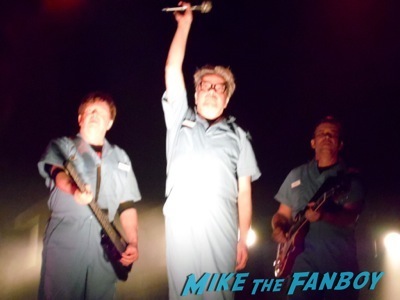 but the real moment was when they performed “Clock Out” with Alex Casale (who is Bob Casale’s son). Booji Boy came out dressed in Yo Gabba Gabba onesies and sang, “You got me bugged.” 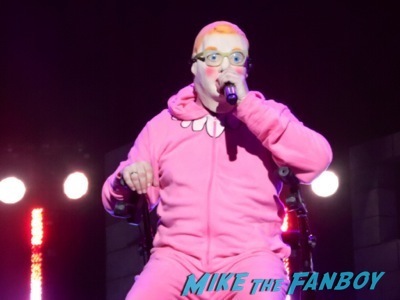 There was a meet and greet after the show and I got to say hi and get my stuff signed. I ended up giving Mark the portrait of General Boy that Ness drew and he was really excited by it. 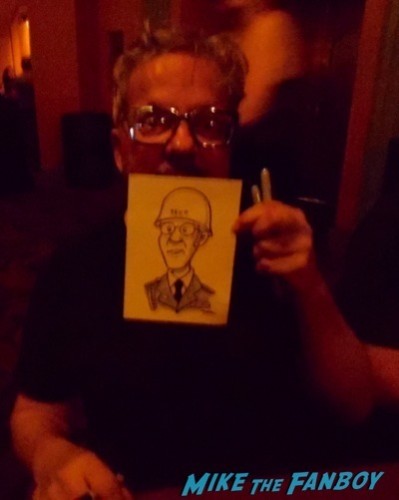 Of course autographs and picture were hard to get, but it was around 11pm and I had to rest up for the next show in Solana Beach near San Diego.

Round Two was in Solana Beach and due to a stupid traffic jam, we didn’t arrive at the venue until around 5pm (I brought my mom this time). I met up with a handful of devotees and noticed a whole bunch of casual fans had homemade radiation suits with whips (I guess someone missed the memo about this being a hardcore show).

While we were chatting, security came up to me and said no cameras were allowed and tried to grab my camera (!). I requested to speak with the venue manager (since I’d taken pictures at the Gary Numan show at the same venue without a problem) and was completely ignored.

Around the same time my mother, who is disabled (artificial knee) asked security if she was on the handicapped list since she’d requested a special seat when she RSVP’d. The guard did nothing to accommodate her (she ended up sitting on a bench in the back), so as the doors opened she went to look for the belly up manager (who was nowhere to be found) while I raced to the front with my General Admission ticket (no VIP this time).

The show had a similar set list as the previous one, except for the crowd barely singing along to the chorus of “Midget” and the additional encore of “Mongloid,” which Mark had fun making duck sounds and showcasing a Bob 2 painting made by a devotee (I wish cameras were allowed!). Anyway, the show was great and it was a wonderful closure to an amazing 40 year career.